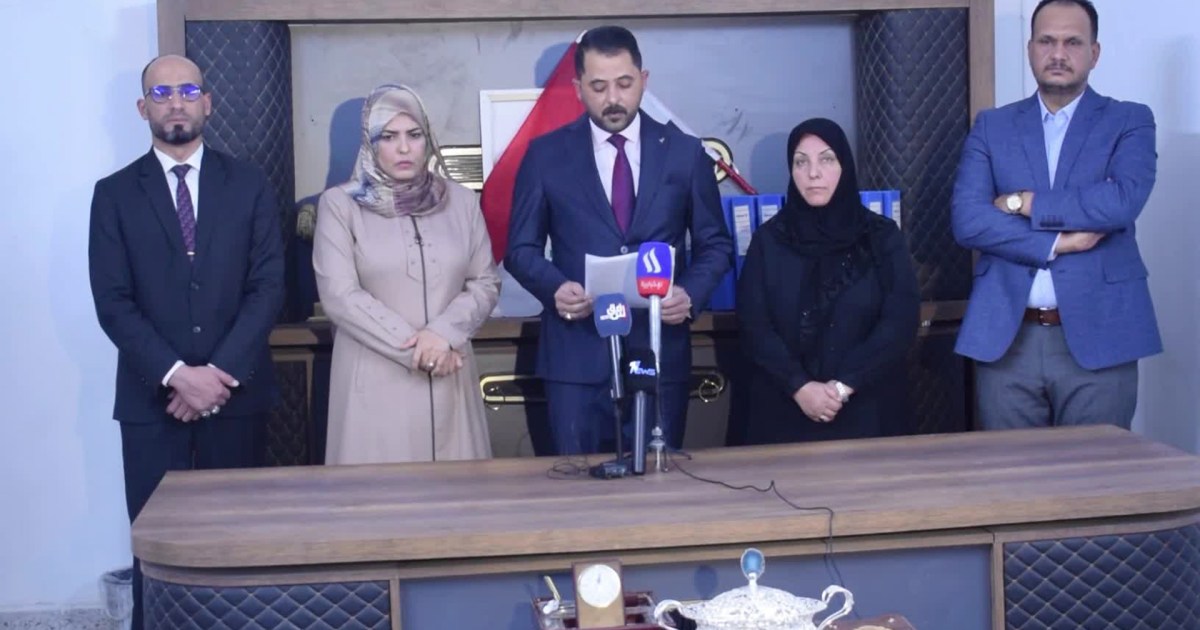 This comes after Al-Rikabi hinted at the corruption of a number of the movement's deputies and that anyone proven to be corrupt in an extension will be dismissed.

And when 9 members of the House of Representatives extended, 5 of them announced - in a statement read by Representative Muhammad Nuri Aziz - that their resignations came in protest against al-Rikabi’s betrayal of the members of the parliamentary bloc of the movement and accusing them of corruption, noting that al-Rikabi’s betrayal of them came after criticism against him due to the mistakes he committed.

The statement added that the five deputies had no intention of resigning, but it came after their inability to correct and their exposure to treason, calling on Al-Rakabi to present evidence of corruption he accused them of.

The five deputies indicated in their statement that they announced their resignation from the extension movement, and their commitment to the principles of the October demonstrations.

The announcement of the resignation of 5 deputies from the extension movement came a day after Al-Rikabi left a live broadcast on his Facebook account, in which he said that "the movement's members object to the implementation of the electoral program and equality among Iraqis in accordance with the principles of popular demonstrations."

Al-Rikabi added that all political parties in Iraq target the extension movement, considering that this is normal, "because the extension will turn into a genie that swallows these parties and removes them from power," noting that "the parties use paid pens to blackmail an extension."

Al-Rikabi indicated that "there is a suspicion that is being raised against the extension of it being allied with the Sadrist movement bloc," explaining that "there are no alliances with any party in power, and the country is disrupted because of the American custom of forming the government by a major Shiite bloc," noting that "the political blocs within In the political impasse, they all have weapons."

He stressed that his movement will not ally itself with any political party that does not share general principles and will not enter into an alliance to form a government, and that the entry of extension representatives into the presidential election session came after negotiations with the Triple Alliance (led by the Sadrist movement) by imposing 17 points.

In turn, the extension movement said, in a statement published on its Facebook page, in response to the mutual accusations between its leaders, "It was decided to withdraw the Secretary-General's hand from his duties temporarily and during the fact-finding period as an administrative measure to ensure the transparency of the work as he is a party to the complaint, and to form and name a (fact-finding) committee. ) from within the movement’s leadership body to look into the complaints addressed to the movement’s personalities, which were supposed to be investigated with the deputies.”

The division within the extension movement, and the resignation of 5 deputies from it, provoked different reactions on social media platforms between members of the movement and activists in the protest movement in Iraq.

Academic and political activist Najm Abed Tarish said through his Facebook account, "Dr. Alaa Al-Rikabi, members of Parliament who withdrew from the extension movement, you are required to appear to the people and clarify the circumstances of what happened...."

Abdel Tarish added, "It is not about personal positions. You presented yourselves as representatives of part of the youth movement and were elected on this basis. People now want to know what happened? Why did it happen so quickly?"

Activist Dia Al-Hindi wrote, on his Facebook account, "An extension is not a bridge to cross, and withdrawal before the investigations start is an escape," noting that "the link between the MP and the extension movement is an alliance that I find, meaning there is no deed signed on a void and no resignation from Parliament without a date." .

Al-Hindi added, "I call on the withdrawing deputies to reconsider their hasty decision and clean their offices from the cadres of other parties...".

Activist Naseer Basem commented, through his Facebook account, saying, "Extension deputies are all obliged, and not required, that you all sit at one table, and we are at a table and we will interrogate you one by one, and you have to answer frankly all the questions that will be directed to you by the people of the square who Without them, we would not have achieved a landslide victory in the elections."

Bassem added that "our votes will not be in vain. We have to know all the small and big details and everything that happened in the previous period."