“The real efficiency will be very small”: how the West intends to increase arms supplies to Ukraine

The head of the Pentagon, Lloyd Austin, said that during the meeting of the donor countries of military assistance to Ukraine, new plans were announced to assist Kyiv. In particular, Denmark promised to transfer missiles and the Harpoon launcher, while the Czech Republic has already sent attack helicopters, tanks and missile systems. Austin also noted that a number of other countries have reported the transfer of new shipments of "critical artillery systems and ammunition", including Italy, Greece, Norway and Poland. According to experts, these statements by the head of the Pentagon indicate that it is the United States that is coordinating the actions of a coalition of states to transfer weapons to Kyiv. However, such supplies will not be able to significantly affect the course of Russia's special operation in Ukraine, analysts are sure. 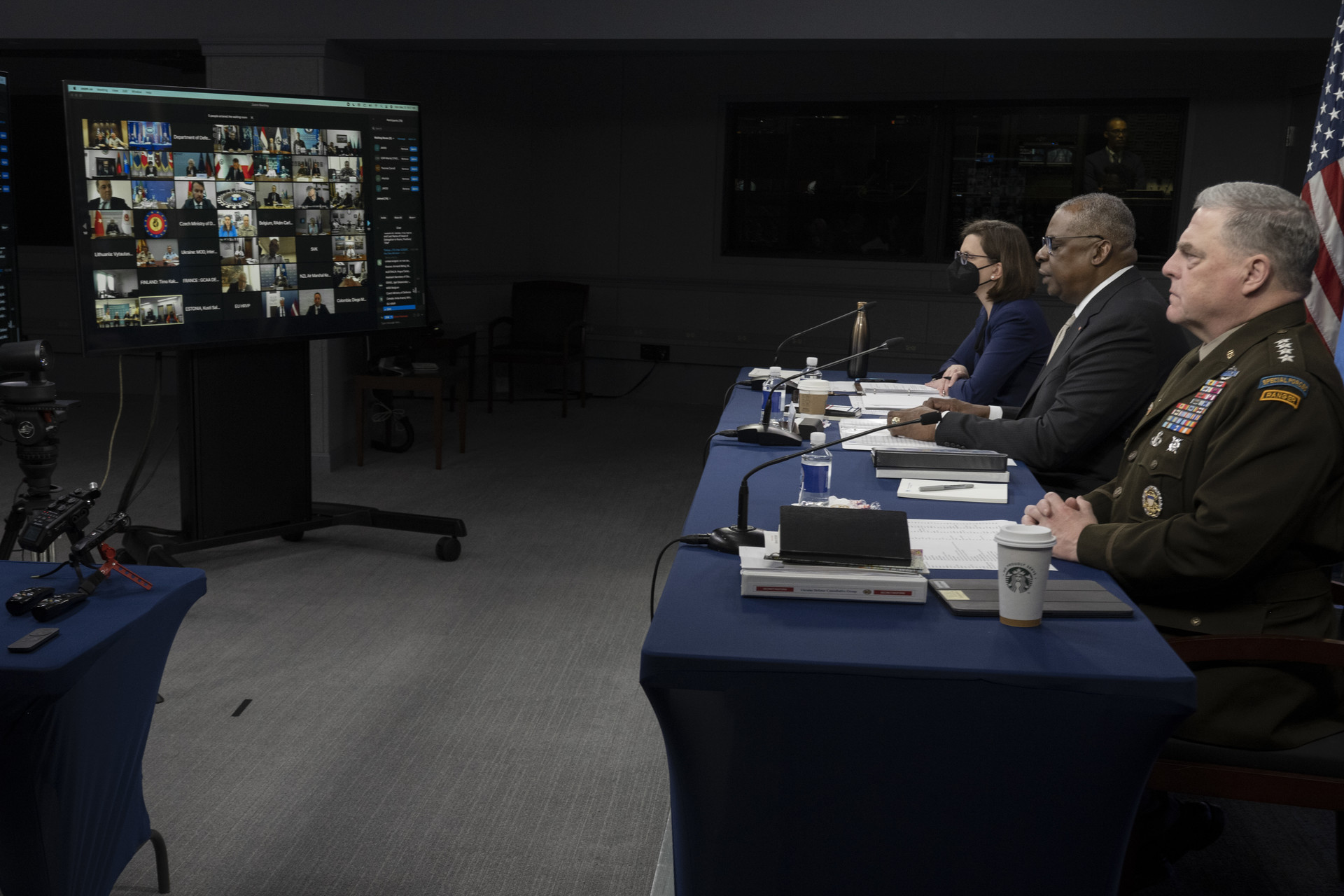 The head of the Pentagon, Lloyd Austin, after a meeting of donor countries of military assistance to Ukraine, said that during this online summit, new plans were announced to assist Kyiv in the field of security.

“I was glad that more than 40 countries joined today's virtual meeting of the contact group on the defense of Ukraine.

We had a very productive series of discussions and welcomed many brand new security assistance announcements from literally all over the world,” he wrote on his blog.

In particular, Austin said that Denmark would transfer anti-ship missiles and a Harpoon launcher to Ukraine "to help protect its coast."

In addition, he thanked the Czech Republic for sending attack helicopters, tanks and missile systems to Kyiv.

The head of the Pentagon noted that a number of other countries announced during the meeting the transfer of new batches of artillery systems and ammunition, in particular Italy, Greece, Norway and Poland.

Following the meeting, Austin said that such supplies are extremely important for Ukraine.

“Many countries are providing critically needed artillery ammunition, coastal defense systems, as well as tanks and other armored vehicles,” the Pentagon chief said.

“Others have made new promises to train Ukraine’s forces and support its military systems.”

He also said that at the meeting, the heads of the military departments heard the Minister of Defense of Ukraine Oleksiy Reznikov, as well as other representatives of the Ukrainian military leadership and intelligence.

“The information provided by the Ukrainian leadership spoke about the battle in the Donbass and in other regions and about what means the Ukrainian military needs to defeat the enemy,” the Pentagon press service said.

The statement also says that Austin, among other things, announced the holding of a face-to-face June meeting of countries - donors of military assistance to Kyiv in Brussels.

“After today’s discussions, I am pleased to announce that we are stepping up our efforts,” the press service of the US Department of Defense quoted Austin as saying.

“We will continue to deepen our coordination and cooperation so that Ukraine can maintain and strengthen its actions on the battlefield.

Our combined efforts will strengthen and modernize the Armed Forces of Ukraine to help them deter Russian aggression in the future.”

The first meeting of the group of countries - donors of military assistance to Ukraine was held at the end of April at the Ramstein airbase in Germany.

After the event, Austin said that Berlin would send about 50 Gepard anti-aircraft systems to Kyiv, the British government would provide additional air defense systems, and Canada would send eight armored vehicles.

On May 20, Pentagon spokesman John Kirby said during a briefing that the United States was "impatient to find out" what types of weapons other states were willing to send to Kyiv.

He also noted that the main purpose of the meeting is to draw the attention of the leaders of the countries "to reports from the battlefield, to what is happening on the ground."

According to him, the Armed Forces of Ukraine are most in need of long-range firepower and the United States is "working on it."

In this direction, Kirby specified, Washington is closely cooperating with allies and partners.

“Among other things, we are discussing with our allies and partners the transfer of their artillery systems, some of which Ukrainians are well acquainted with, others, for example, our M777 howitzer, not so well.

However, we continue to discuss this, ”Kirby said.

The day after Kirby's speech, US President Joe Biden signed a nearly $40 billion support budget for Ukraine, including military support for Kyiv.

As the head of the White House previously reported, the funds he requested will allow the United States to “send even more weapons and ammunition to Ukraine, replenish its own supplies and support the American military contingent deployed on the territory” of NATO countries.

“We have provided unprecedented assistance to Ukraine, and my administration will continue to facilitate the speedy delivery of additional weapons and equipment that has been approved by Congress,” Biden said.

He also announced the allocation of a new package of assistance to Kyiv in the field of security, in which Ukraine will be provided with additional types of artillery weapons, radars and other equipment.

At the same time, as NATO Secretary General Jens Stoltenberg said, the US-led alliance does not intend to send troops to Ukraine, because it wants to avoid a direct armed clash with Russia.

As Aleksey Podberyozkin, director of the MGIMO Center for Military-Political Studies, noted, Austin’s statements indicate that it is the United States that leads the coalition of states that Washington managed to attract to military support for Ukraine, and also coordinate their actions to transfer weapons.

“The American side builds its relations within the framework of this coalition rather rigidly, first of all, the capabilities of the members of this group are taken into account.

At the same time, it is important for Washington that, even if the state does not have a significant military potential to help Kyiv with weapons, it must at least pretend to participate in this joint project.

The task of the United States is to form some kind of combined military power, which will be broadcast to Ukraine in order to delay the special operation, ”Podberyozkin said in an interview with RT.

However, according to him, even though the West, led by the United States, is sending a significant amount of weapons to Kyiv, these deliveries cannot seriously affect the course of the special operation in Ukraine for a number of reasons.

“Without a well-coordinated command and military specialists who understand the technology they use, there will be little sense from Western weapons for the Armed Forces of Ukraine.

In Ukraine, there are almost no professional military left - only untrained ones remain, who do not have time to be trained to use the weapons that the West sends.

All this leads to the fact that a lot of weapons and military equipment become unusable due to improper maintenance or their use is extremely inefficient, ”Podberyozkin believes.

A similar position is taken by military expert Yuriy Knutov - he also believes that the United States and other Western countries "will not achieve their goal" through the supply of weapons, since the bulk of the Ukrainian military, who were versed in these weapons, "already knocked out."

“Now poorly trained and poorly motivated reservists are coming to the Armed Forces of Ukraine.

Kyiv has almost no specialists who served before, who have combat experience and who know how to use Western artillery and air defense systems of Great Britain.

It will take at least a few months to master all this knowledge, ”the analyst said in a conversation with RT.

In addition, many types of weapons that come to Ukraine from the West require proper maintenance, which the Armed Forces cannot provide, Knutov noted.

“Many American and Western models of military equipment are capricious in operation.

If, after a series of shots, it is not allowed to rest, it can become deformed - like, for example, American howitzers.

In addition, the heterogeneity of the weapons supplied to Kyiv leads to the fact that they are much more difficult to manage, ”the expert said.

In this context, Podberezkin also commented on the words of the head of the Pentagon about the supply of Harpoon anti-ship missiles by Denmark.

“Copenhagen and the US Department of Defense do not care which Ukrainian ships will use these weapons, given that Ukraine has no ships capable of this.

The missiles themselves have good characteristics, but outside the navy system they mean little.

In addition, Russia and its fleet have extremely effective air defense systems.

The detection and destruction of missiles such as Harpoon is primarily a technical task for the Russian Federation, ”the analyst believes.

Podberezkin also believes that these weapons and other weapons supplied by the West to Kyiv, due to the impossibility of using the Armed Forces of Ukraine, can be sold through the black markets abroad if they are not destroyed by the Russian military.

“It cannot be ruled out that all this will simply be sold at dumping prices.

In addition, a significant part of the equipment will be destroyed as it is stored on the territory of Ukraine by high-precision strikes of either aviation or cruise missiles of the RF Armed Forces, ”the expert is sure.

According to Podberezkin, despite the loud statements of the head of the Pentagon, Western arms supplies will not be able to turn the tide of Russia's special operation in Ukraine.

“Kyiv is losing its ability to effectively manage the armed forces every day, and the ability of the Armed Forces of Ukraine to resist is also weakening all the time.

Therefore, these supplies make little sense and their real effectiveness will be very small, ”the analyst said.