On the front line of risk. In one of the hottest areas on the planet. Where no day is quiet. Where the fighters are 24 hours a day, seven days a week in... 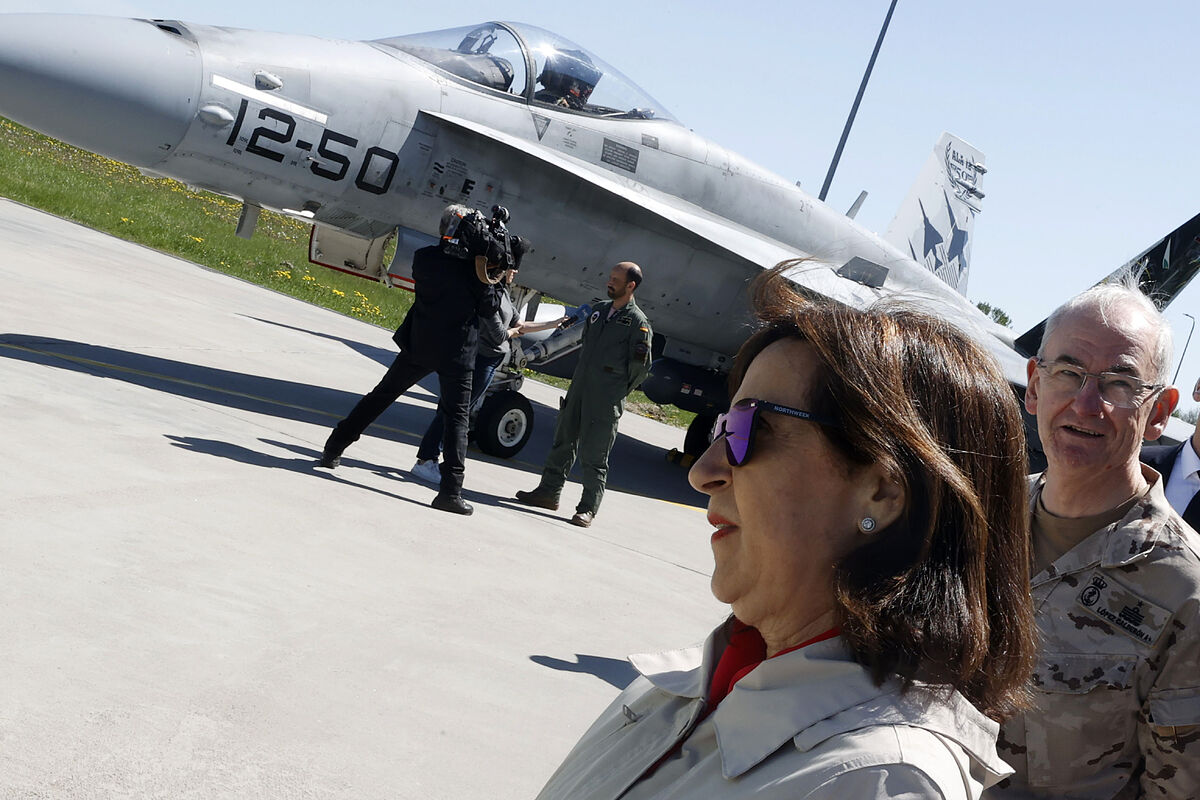 On the front line of risk.

In one of the hottest areas on the planet.

Where no day is quiet.

Where the fighters are 24 hours a day, seven days a week on guard to deal with risk situations, threats that start from the Russian Federation.

In Lithuania, at the

, 140 Spanish soldiers and eight fighters participate in the deployment of aerial surveillance, in the Baltic Police.

The Defense Minister, Margarita Robles, has landed to visit the Spanish contingent, in the week in which the Armed Forces conference is held.

And at that moment there was an alarm, "one more".

Two Spanish fighters had to go out to "control" a Russian aircraft that was in an exclusion zone, which was entering a NATO zone without proper accreditations.

He explained that departures are common, that tension situations are daily, but that the intercepted planes have not been "aggressive" so far.

Although yes, from time to time they 'play' cat and mouse, as if it were a tactical exercise: "They get in line when you are next to them".

"But at the moment we have not suffered an episode of maximum pressure," point out the soldiers who participate in the deployment.

Of course, the intercepted planes are "transport or intelligence."

The military operation in the Baltic countries was launched in 2004, when NATO included them as partners.

And they are countries that did not have air defense, so Baltic Air Policing

(BAP) missions were developed on a rotating basis

among the member countries that offered themselves.

After the invasion of the Crimean peninsula by Russia, the Alliance implemented in 2014 a series of deterrence and response measures, among which was the integration of all NATO air defense systems, which involved the integration of the detachments of the Baltic Air Police in said plan.

device (Wolf in Lithuanian) is made up of 8 fighter planes.

The staff is currently made up of 140 soldiers (130 permanent and 10 activated reinforcement serials).

The majority of the personnel belong to the Air Force (138 members of the EA and 2 from the CC, 125 men and 15 women), are located at the Siauliai Air Base (Lithuania) and at the Karmelava air control center with access to all necessary services.

This last contingent of the Air Force, deployed since April 1, has already had to face almost a dozen alerts with more than 400 flight hours.

The officer in charge explained to the minister that Russian transport and intelligence planes have been intercepted, "in most cases we even greet each other when we go out to identify and photograph," these commanders point out, who do not rule out that the Russians try to "minute" NATO's deployment capacity in the face of an air threat in the Baltic zone.

Minister Robles, who insisted that the Spanish military are on a 'peace mission', thanked the work and professionalism of the military deployed in the area.

"Sometimes in Spain we don't value what we have enough", and she applauded the work carried out by the Air Force.

She had a memory for the relatives of the displaced military.

The Jemad, López Calderón, assessed the mission being carried out as "successful" and thanked the contingent for its work "which serves to increase the international prestige of our Armed Forces."

The next deployment of Spain in the Baltic Police may take place together with Germany, once the current rotation ends.

But if the work of the Armed Forces in Lithuania is currently complicated, deployment in Latvia is not easy either, where more than 300 soldiers are part of the defensive deployment in the area with tanks.

According to Defense sources, Spain has already offered to Ukraine to train its military in the handling of battle tanks such as those used by NATO.