In May 80 years ago, in the hot land of Yan'an, the flower of the people's literature and art bloomed one after another.   "Our literature and art are for the masses, first and foremost for the workers, peasants and soldiers."   In May 1942, Comrade Mao Zedong presided over the Yan'an Symposium on Literature and Art, clearly pointing out that literature and art should serve the broadest masses 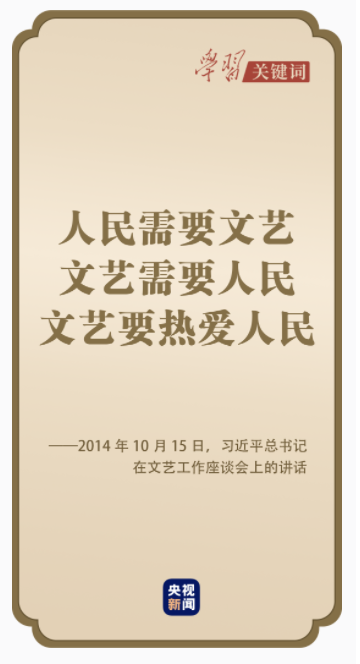 In May 80 years ago, in the hot land of Yan'an, the flower of the people's literature and art bloomed one after another.

"Our literature and art are for the masses, first and foremost for the workers, peasants and soldiers."

In May 1942, Comrade Mao Zedong presided over the Yan'an Symposium on Literature and Art, clearly pointing out that literature and art should serve the broadest masses of the people.

Since the 18th National Congress of the Communist Party of China, my country's literary and artistic undertakings have shown a booming scene of prosperity and development.

"The people are the source and living water of literary and artistic creation."

On October 15, 2014, General Secretary Xi Jinping quoted Comrade Mao Zedong at the symposium on literature and art work and pointed out that in order to reflect the voice of the people, literature and art must adhere to the fundamental direction of serving the people and socialism.

"Art for the people", this concept is in the same line, is the echo of history, and is also the proposition of the times.

On February 4, 1943, the 30th day of the Lunar New Year, the first New Year's Eve after the Yan'an Symposium on Literature and Art.

In the square outside the south gate of Yan'an, dozens of literary and art groups competed to perform, creating a happy atmosphere.

The 150-member "Lu Yi Yangko Team" of Lu Xun Academy of Arts performed "Yangko Supporting the Army" and other programs that caused a sensation.

These programs use popular folk forms such as "kick the field", "push a trolley", "run a dry boat" and "cross flower baskets", highlighting the theme of supporting the army and the family and mass production, which is refreshing.

The folks in Yan'an watched Lu Yi's new Yangko, and said with a thumbs up: "Lu Yi's family." This is a very cordial expression, just like "Old Zhang's family" and "Old Li's family".

People's needs for spiritual and cultural life exist all the time.

At the symposium on literature and art held in 2014, General Secretary Xi Jinping pointed out, "Material needs are the first, and food is the most important, so it is said that 'the people take food as the sky'. However, this does not mean that the people The needs of spiritual and cultural life are dispensable.”

A theatrical performance, four actors, three audience members, Yue Opera "Eighteen Farewells", saxophone solo "On the Golden Mountain in Beijing", and the song "The Waves of Honghu Lake". On a remote island, such performances are held almost every month.

The actors of the volunteer service team run around the islands all the year round, bringing warmth to the left-behind elderly people, and bringing the joy of life to the elderly with the beauty of literature and art.

△On May 13, the grass-roots performance of the Dunhuang Culture Benefiting the People in Gansu kicked off.

Nowadays, with the continuous improvement of people's living standards, the people have higher requirements for the quality, taste and style of cultural products, including literary and artistic works.

There are a hundred or a thousand ways to create literature and art, but the most fundamental way is to take root in the people.

Writer Lu Yao threw himself on the vast land and deeply felt what the people were thinking in the process of reform and opening up.

His novel "Ordinary World" has sold more than 20 million copies and has become an inspirational classic.

General Secretary Xi Jinping has repeatedly affirmed and praised Lu Yao and his works, and encouraged the majority of literary and art workers to go into the depths of practice, observe people's lives, and express their aspirations.

In recent years, "going deep into life and taking root in the people" has become the daily creation of literary and art workers.

Looking back fondly on the prodigious course of poverty alleviation, aiming at the fiery life of getting rid of poverty and overcoming poverty, focusing on the struggle and enterprising spirit of the peasant group who have worked hard and worked hard for a long time... "My Hometown and Me", "Shan Hai Qing", etc. Movies and TV dramas are applauded and applauded.

At the beginning of 2021, a TV drama "Shan Hai Qing", which tells the story of the struggle of the people of Xihaigu, Ningxia, relocated to Minning Town with the help of their counterparts in Fujian, and turned "Dry Beach" into "Golden Beach", is highly sought after.

The theme, characters and even many plot paragraphs of "Shan Hai Qing" are derived from real prototypes.

Lin Zhanxi is an agricultural technology expert whose story is vividly reproduced in the TV series "Shan Hai Qing".

At the third "Belt and Road" construction symposium, when talking about introducing my country's Juncao technology to countries along the route, General Secretary Xi Jinping said: "I sent Lin Zhanxi from "Shan Hai Qing"." This detail triggered Many netizens resonated: "I followed the same drama as the general secretary!"

Only when the spotlight of creation is aimed at the tens of millions of people can the tree of literature and art remain evergreen.

At the opening ceremony of the Beijing Winter Olympics, which has attracted worldwide attention, ordinary people from all walks of life have become the protagonists; migrant workers with tools, builders with blueprints, and soldiers saluting, on the square of the Chinese Communist Party History Exhibition Hall. , White marble sculpture is a statue of the people and lyric for the times; the theatrical performance "The Great Journey" to celebrate the 100th anniversary of the founding of the Communist Party of China, the concept of "people first" runs through...

Going into the depths of life, comprehending the essence of life among the people, and understanding the details of life... In the new era, literary and art workers continue to write new literary and artistic classics.

Literature and art not only need the people, but also love the people.

"If you don't love the people, then you can't create for the people." Reply to the Inner Mongolia Wulan Muqi team, the old professor of the Central Academy of Fine Arts, the teachers and students of the Chinese Academy of Opera, and the film performance artist Niu Ben who joined the party in his old age. , visit the members of the literary, art and social sciences who participated in the National Committee of the Chinese People's Political Consultative Conference... General Secretary Xi Jinping has always emphasized that the majority of literary and art workers should adhere to the people-centered creative orientation and put the people in the highest position in their hearts.

△The TV series "Armageddon" looks back at history and pays tribute to the people's heroes.

Wang Jicai, the former director of the Kaishan Island Militia Post in Lianyungang City, Jiangsu Province, and his wife Wang Shihua have stayed on the border island for 32 years and have experienced loneliness and wind and rain that ordinary people can't imagine.

They persevere and pay without complaint, and write extraordinary chapters of life in ordinary positions.

"We use Wang Jicai's spirit to shoot Wang Jicai." The filming lasted for more than half a year. The "Island Keeper" creative team experienced typhoons, exposure to the sun, and bleeding from rocks, but everyone was always motivated.

After the film was released, a woman said to the creative team with tears in her eyes at the audience meeting: "Thank you, I am an ordinary sanitation worker. I saw Wang Jicai's perseverance and my own shadow in the film. We are like this. I am very moved that ordinary people can be recorded by movies and remembered by the times."

"If literary and art workers want to be successful, they must consciously share the same breath with the people, share their destiny, and be heart-to-heart, rejoice in the joy of the people, worry about the people's troubles, and be the children and cattle of the people. This is the only correct way, and it is also a writer. The greatest happiness of an artist."

The hundred gardens of literature and art will always bloom for the people.

General Secretary Xi Jinping quoted Comrade Mao Zedong as saying, "To look at the victory of the Chinese people's democratic revolution after a few decades will make people feel that it is just a short prelude to a long drama. The drama must start from the prelude. Yes, but the prologue isn't the climax yet."

The long historical drama that kicked off is getting better.

The same is true of Chinese literature and art.

On the road to revival, there will be more magnificent and colorful artistic scenery.