Heat, cold and wind - here are the extreme weather that plagues the world

During May, several extreme weather conditions have plagued several countries around the world. Minus temperatures in Brazil hit the homeless hard and in Pakistan the population is plagued by record high and life-threatening temperatures. "This is a warning about what will be the average in just a few years," Natalie Mahowald, a climate researcher at Cornell University, told the Associated Press. 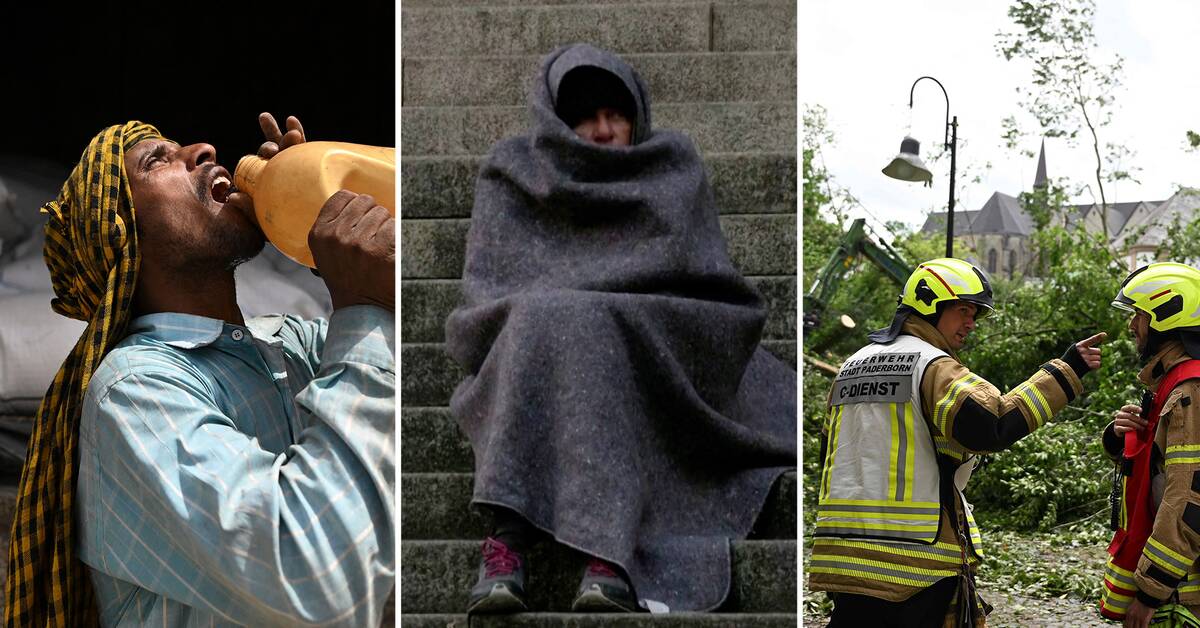 The contrasts in the weather have been great in several places around the world.

In Europe, strong storms sweep through Germany while heat records are set in both Spain and France.

On the east coast of the United States, authorities have warned of dangerously high temperatures while snowfall and cold plague Brazil.

A man drinks water in Central Park in New York.

The temperature in the area is expected to rise above 32 degrees Celsius and during the weekend, heat warnings have been issued.

According to the Spanish weather authority AEMET, the average temperature in Madrid has been 16 degrees warmer than usual during the month of May.

- May has always been cool, but this year we seem to go straight to summer.

But it's just a struggle, says Rocio Vazquez, who works as a street sweeper in Madrid.

Football fans cool off in a fountain in Seville ahead of the Europa League final between German team Eintracht Frankfurt and Scottish Rangers.

In southern Brazil, several cold records have been broken during the week.

The number of homeless has increased by 30 percent in Brazilian São Paulo, a group that has been hit hard by the cold snap that has swept across the country.

On the east coast of the United States, people flock to the beaches in the unusually warm May weather, and the National Weather Service said on Friday that the temperature is approaching a record for the month of May and about 25 million Americans live in areas where warnings were issued sometime last week. temperatures.

Last week, both western Germany and the state of Michigan in the United States were hit by tornadoes.

The weather phenomenon is very unusual in both places.

German police say 43 people have been injured in the town of Paderborn, where a tornado struck.

At least one person must have died and a woman cared for life-threatening injuries.

St: Clemen's Catholic Church in the city of Hellinghausen lost its steeple when a powerful storm, which has been described as a tornado, swept through the city.