On the 89th day of the Russian invasion of Ukraine, this Monday, May 23, follow live the latest information on the conflict. 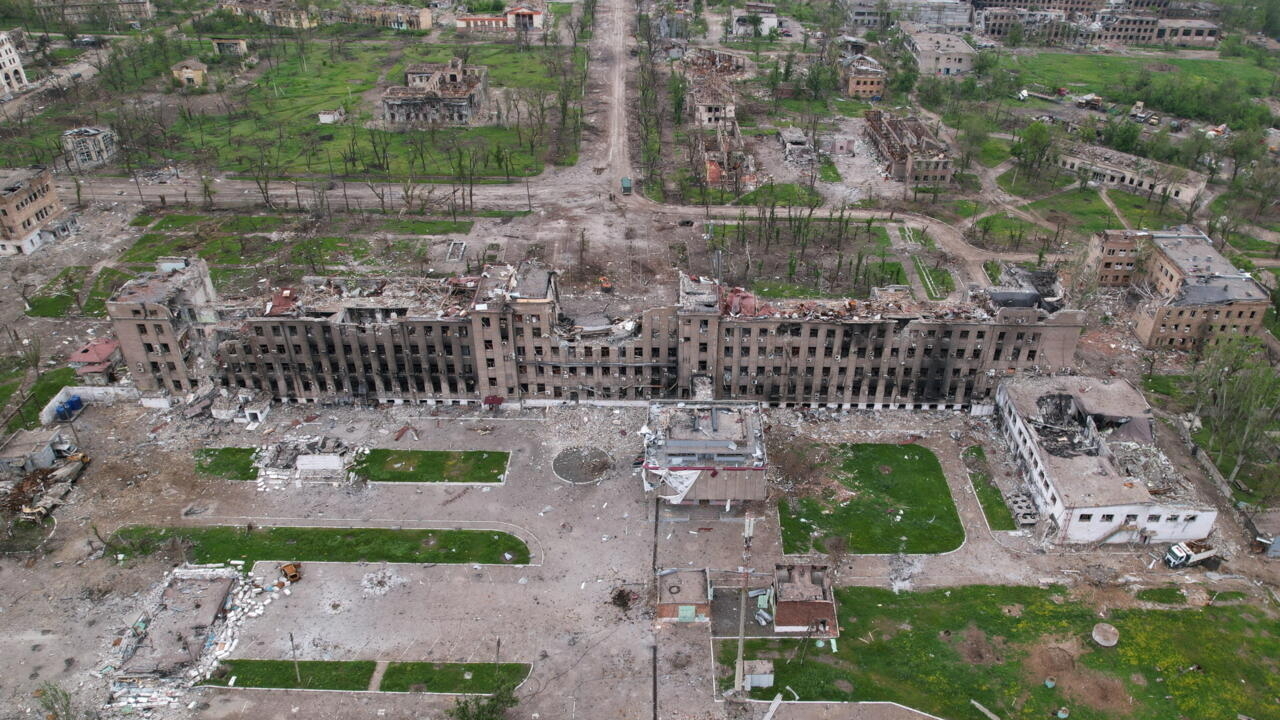 A view of a destroyed administrative building at Azovstal Iron and Steel Works in the port city of Mariupol, Ukraine, May 22, 2022. Photo taken with a drone.

On the 89th day of the Russian invasion of Ukraine, this Monday, May 23, follow live the latest information on the conflict.

meeting of the planet's elites

, who meet from this Monday in Davos.

in Ukraine have been extended for three months, until August 23.

help Ukraine become a member of the European Union.

any agreement with Moscow

involving a transfer of territory, says a close friend of Volodymyr Zelensky.

For its part, Russia says it is ready to relaunch the talks.

eastern Ukraine, with the Russian Defense Minister saying the conquest of the Luhansk region is almost complete.

In this region, Sievierodonetsk and Lyssytchansk, now surrounded by Russian forces, constitute the last pocket of Ukrainian resistance.

4:10 am: Volodymyr Zelensky expected in Davos

The Ukrainian president continues his videoconference tour with world leaders.

Volodymyr Zelensky will speak this Monday before the World Economic Forum (WEF), which is meeting again in Davos after two years of suspension due to the pandemic.

He should take advantage of this platform to call for more aid, financial and military.

Russia's invasion of Ukraine has pushed the number of uprooted people above 100 million for the first time, the United Nations warned on Monday.

The number of people forced to flee conflict, violence, human rights abuses and persecution has passed the dizzying 100 million mark for the first time, driven by the war in Ukraine and other deadly conflicts

“, writes the High Commissioner for Refugees in a press release.

"I never really thought about refugees before, because it was never something I thought might happen to us. I never imagined I would experience war."

15-year-old Daria reflects on fleeing her home in Ukraine.

04:00: A mayor appointed by Moscow injured in an explosion

The Moscow-installed mayor of Energodar, a city in southern Ukraine hosting Europe's largest nuclear power plant, was injured in an explosion on Sunday (May 22nd), a Ukrainian official and Russian news agencies said.

Andrei Shevtchik was appointed mayor of Energodar after Russian troops took control of this city and of the Zaporijjia nuclear power plant located on its territory.

We have precise confirmation that during the explosion Shevchik, the self-proclaimed head of

and his bodyguards were injured

The latter added that they were in hospital “

with injuries of varying severity.

“, but the circumstances of the explosion remain to be clarified.

There were no other injuries in the blast, he added.

Quoting a source from the emergency services, the Russian news agency RIA Novosti specified that Mr. Shevtchik is in intensive care.

The explosion was caused by an "improvised explosive device", according to the other Russian agency TASS, citing a source in the police force.

A city of nearly 50,000 inhabitants, Energodar was built in the 1970s around the nuclear power plant which is located on the Dnipr river opposite the city of Zaporijjia, held by the Ukrainians.

The plant was the site of confrontation from the first days of the conflict, raising fears of a possible nuclear disaster in a country whose history is marked by the explosion of a reactor in Chernobyl in 1986.