The drug trade is rampant in the neighborhoods of Ecuador

Luis Sarmiento went out one morning in March to buy bread with his grandson in his hometown of Duran, when he found in the street two beheaded and handcuffed bodies, and tried to avoid the child seeing this horrific scene, while realizing the message left by the drug dealers.This retired worker says a 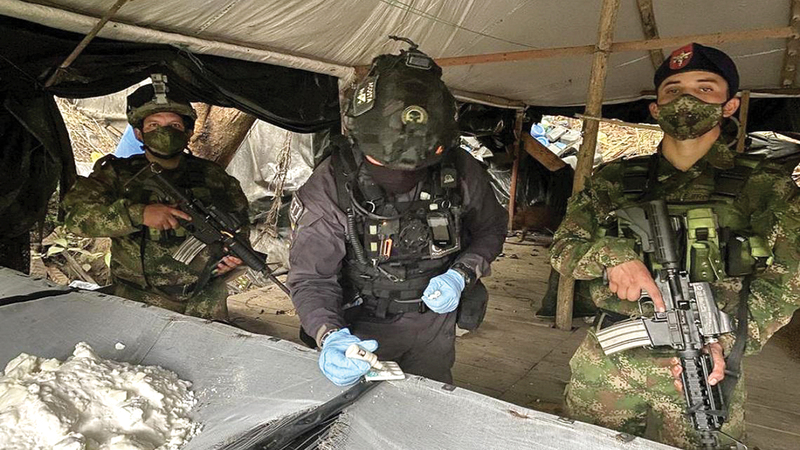 The drug trade is rampant in the neighborhoods of Ecuador

A security raid on a drug dealer's home in Ecuador.

One morning in March, Luis Sarmiento went out to buy bread with his grandson in his hometown of Duran, when he found in the street two beheaded and handcuffed bodies, and he tried to avoid the horrific sight of the child, while realizing the message left by the drug dealers.

“I covered my grandson's eyes, came home and closed the windows and I didn't know anything yet," says the 78-year-old retired worker, who has lived for 16 years in the slum of Cerro Las Cabras in Doran, a city of 200,000 people located near the port of Guayaquil (west). that".

A former police chief told AFP, on condition of anonymity, that drug smuggling has become rampant in this hillside neighborhood that has turned into a "hot spot for hired killers."

Gangs recruit boys from the age of ten to sell drugs.

"First they sell, then they supply them with weapons, and they turn into hired killers," said Duran Police Chief Colonel Jorge Hadaty.

In the "Los largartos" hideout of one of the Doran gangs, authorities confiscated several stuffed crocodile toys.

The police believe that in order to get close to the children and later lure them into their criminal network, the gang members are advertising by distributing toys that are mentioned in the name of their network.

Of the 230 delinquents arrested in Duran between January and April 2022, the vast majority were minors or barely adults.

Colonel Hadathi says, "Despite their young age, they committed four or five murders."

Violence has become a daily sight in Cerro Las Cabras.

In February two bodies were found hanging on a pedestrian bridge.

Since October 2021, about 10 mutilated, hanging or beheaded bodies have been dumped in public in plain sight in the brutal Mexican cartel-style score-settlement.

These assassinations are the fruit of the war between rival gangs to control the local smuggling market, which, according to official figures, can generate $1.8 million per month in the city of Duran alone.

Since January in Duran, and the neighboring cities of Samborondon and Guayaquil, the country's main port and staging point for clandestine cocaine shipments to Europe and the United States, 363 people have died in drug-related crimes.

On the slopes of Cerro Las Cabras, about 30 policemen search vehicles for drugs or weapons, and in the neighbourhood, mounted police are searching for a man.

Neighbors monitor security operations from afar without leaving their homes or engaging in a conversation, and silence reigns supreme here.

Colonel Hadathi says that the city is a “drug store.” He adds, “Families live off drug sales, or receive money from the mafia, while the rest remain silent for fear” of reprisals.

During the recent raid in Cerro Las Cabras, the police were backed by the army as part of a state of emergency declared by the government in three provinces, including Guayas, where Duran is located, to confront the mafias.

"The gangs are playing a cat-and-mouse game with us," said Sergeant Washington Reyes.

They use children and provide them with "lighter-sized" walkie-talkies to inform them of these operations.

The leaders of the "Los Choneros" gang hail from Cerro Las Cabras.

The "Los Choneros" gang is also implicated in the brutal violence that has rocked the country's overcrowded prisons for months, as the gangs settle their scores.

Last Monday, 44 prisoners were killed in the Bellavista detention center in the province of Santo Domingo de los Tsajilas, west of Quito, in clashes between two rival local gangs.

Since February 2021, about 400 prisoners have been killed in these confrontations over control of the prison.

• The police believe that in order to get close to the children and later lure them into their criminal network, gang members are advertising by distributing toys that are mentioned in the name of their network.