The Iraqi government announced the suspension of working hours in all official institutions throughout the country today, Monday, against the background of the country’s exposure to a heavy wave of dust and bad weather. 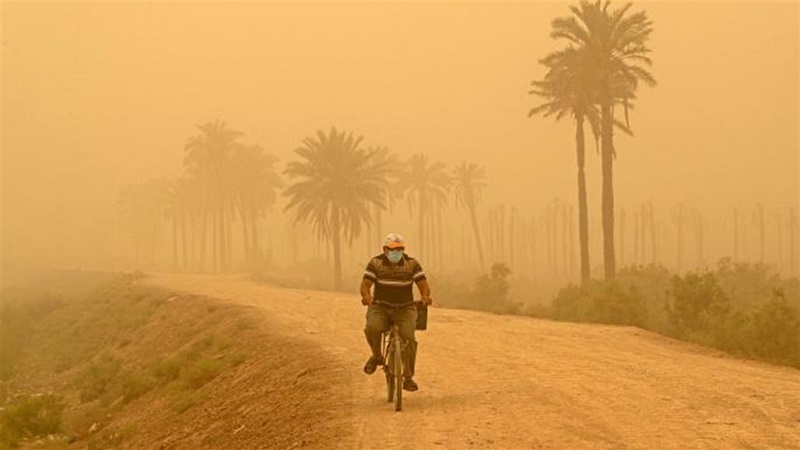 The Iraqi government announced the suspension of working hours in all official institutions across the country today, Monday, against the backdrop of the country's exposure to a heavy wave of dust and bad weather conditions.

A statement by the General Secretariat of the Iraqi Council of Ministers stated that Prime Minister Mustafa Al-Kazemi directed the suspension of official working hours in official institutions, except for the health, security and service departments, on Monday, due to bad weather conditions, and the entry of a wave of severe dust storms to separate areas of Iraq.

The Minister of Education, Ali Hamid Al-Dulaimi, also announced that "due to the weather forecast of a dust storm, and in the interest of the safety of our students and students, it was decided to postpone the exams for the sixth grade students and the unfinished classes on Monday until the next day and with the same announced schedule due to bad weather conditions."

The management of the General Company for Iraqi Airways announced that it will resume the scheduled flights of the national carrier for Monday, after the end of the dust storm and the return of visibility within the permissible limits according to the requirements of the Iraqi Civil Aviation Authority.

The management of the Iraq International Book Fair, which is held on the grounds of the Baghdad International Fair, with the participation of Iraqi, Arab and foreign publishing houses, decided to close the fair’s doors today and extend the exhibition period to an additional day against the background of dust storms.

According to sources in the Meteorological Authority, dust storms entered Iraq on Sunday evening and will reach their peak in the morning hours of Monday, while the General Traffic Directorate called on car owners not to go out or travel between governorates and transport goods due to bad weather conditions and the heavy escalation of dust storms, while hospitals began Iraq and medical centers to raise the degree of preparations to receive critical medical cases as a result of suffocation and respiratory diseases.