Alberto Núñez Feijóo definitely faces a new stage at the head of the PP. After placating the internal crisis with his election as national leader and propping up Madrid with the ... 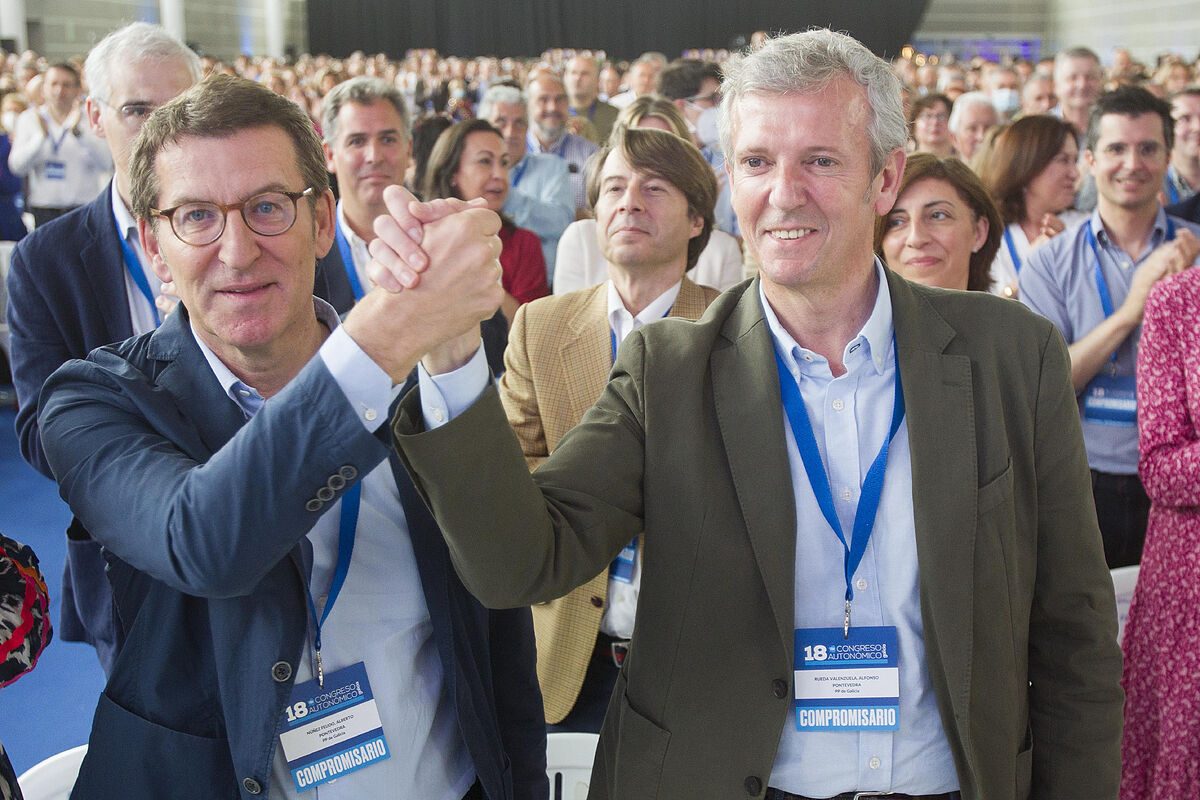 Alberto Núñez Feijóo definitely faces a new stage at the head of the PP.

After placating the internal crisis with his election as national leader and propping up Madrid with the Presidency of Isabel Diaz Ayuso, it was time to close the circle in his land,

, which, with his leap into state politics, lost the president of the party and of the Government .

Finally, the succession process was sealed this Sunday with the appointment of

as the new regional leader.

Rueda has been proclaimed president of the PPdeG in his home, Pontevedra, within the framework of the party's 18th Autonomous Congress, in which he was the only candidate, the result of internal consensus in the party at the regional level sponsored by Feijóo himself.

His efforts allowed him to close his succession in just over a month and a half and his successor is now officially the new president of the Xunta (for a week) and of the party.

at the beginning of April, therefore, he managed to refound the PP at the national level, unite the party by putting out the internal fires and put his community on track.

During his closing speech at the congress, he himself made reference to that internal crisis of the PP and reviewed the "concatenation of crises" that he has faced since in 2006 the Galician PP of

lost the Government of the Xunta and gave way to a bipartisan PSOE-BNG Executive.

"The question is: will I ever have a period in which there is no crisis?" Feijóo reflected, alluding to that firefighting role that since succeeding Fraga in Galicia 16 years ago has made him a reference baron in the PP.

He himself replied: "Probably it would no longer be useful" if the future of the party and of Spain were calm.

In any case, he himself marked out his roadmap for this new stage, in which he would like to "leave the crisis we are experiencing at the moment", economic, territorial, financial and institutional.

Looking back over these last 51 days, he stressed that "the only thing we did was give the party a new horizon", open a period "of illusion, hope and future" with the visit set for the planned state and municipal elections for 2023 and in the Galician regional elections for 2024. "We are beginning a new stage," he himself insisted, predicting "a bright future" for his community and for the country as a whole.

He recognized, in any case, that "we do not know what is missing for the general elections", alluding to the fact that the decisions of the current Executive of Pedro Sánchez are always weighed down by the route marked out by its partners in United We Can and the parties that supported his investiture.

The date of the elections, he recalled, "will depend on ERC and Bildu or "on Yolanda (Diaz) getting along with Podemos and Podemos with Yolanda". It will depend, therefore, "on any eventuality less than what Spain needs ", because "this, unfortunately, is the reality of Spanish politics".

Feijóo avoided in this speech, which was, in turn, a preview of his new roadmap, making direct allusions to the mortgages that the PP may have in Castilla y León or Andalusia.

His only references to these autonomies were to praise the figures of the presidents of both communities,

(present in the room) and

, although if anyone has had his unconditional support it has been Díaz Ayuso.

After his appointment as regional leader, he confirmed the harmony with Sol and reinforced the support already given this Saturday.

"Madrid is an unstoppable PP machine and we are going to protect the PP machines," she promised, advancing Genoa's full support for the Madrid leader's project.

The same trust that transfers to Ayuso is given to his successor, appointed leader of the Galician PP with the support of 97.2% of the delegates.

He highlights that "he knows very well what has happened and what is happening" in the Galician Government, which "is probably one of the best governments in the European regions", he presumed.

But also that he knows "the engine room of the administration's operation" and that he organically knows the PP of Galicia and that "he is a good guy."

As of this Sunday, he announced that he will "call him President Rueda" and "put me in order" and he was sure that in this new stage in which he will seek the fifth consecutive absolute majority of the party after Feijóo's own four, " here there are neither guardianships nor guardianships", alluding to the already famous phrase pronounced by Manuel Fraga in 1990 and periodically recalled by party leaders such as

A new stage free of servitude because the PP is not accountable to any other party in Galicia and in which they drink the fruits of what, according to Feijóo, is "the DNA of our party": unity, service and trust.

Rueda, like the rest of the PP, marked the path that should not deviate, "here comes to work, not post" and "comes to give stories and not to tell stories."

Feijóo wants "a party with principles", that is "a winner, united and committed" and that does not end up condemned to "the arithmetic of power to see if I can be president adding up the defeats", a clear veiled allusion to President Sánchez.

This new formation that tries to lead to a new horizon that ends in the Moncloa boasts that it should not "be accountable to anyone except the Spanish" and made a forceful statement in defense of the Constitution and democratic institutions.

"We are here to govern better, to manage better, to respect more so that we never insult each other, to protect the institutions of the State, so that the Government is not above the institutions of the State and so that the President of the Government is the first Spaniard" , he reminded his party, before finally saying goodbye to his Galician stage.