(In the past ten years in China) Eco-city attracts animals to Beijing to build a "protection net" for biodiversity   China News Agency, Beijing, May 22 (Xu Jing, Chen Hang) In 2012, investigators found 41 first-class national protected animals - black stork and 11 black stork nests in Shidu area of ​​Fangshan, Beijing; The black stork, which is a migratory transit station in Fangshan, settled her 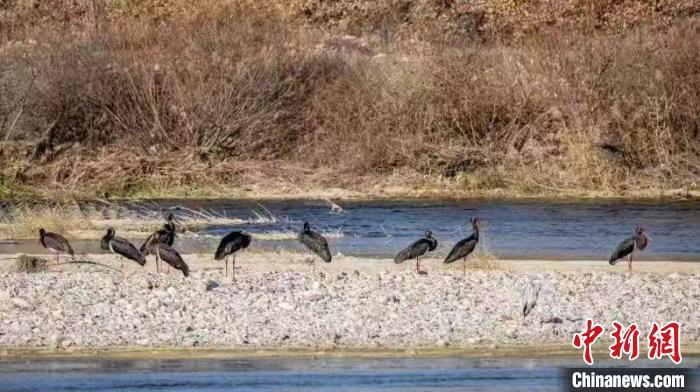 China News Agency, Beijing, May 22 (Xu Jing, Chen Hang) In 2012, investigators found 41 first-class national protected animals - black stork and 11 black stork nests in Shidu area of ​​Fangshan, Beijing; The black stork, which is a migratory transit station in Fangshan, settled here, and the population increased to more than 100, and flew out of Fangshan to settle in other areas of Beijing.

May 22 marks the 29th International Day for Biological Diversity, and this year's theme is "Building a Shared Future for All Life".

17 newly recorded species in Beijing were recorded in the field.

Beijing, one of the most biodiverse metropolises in the world, is building a solid and reliable environment for the wild animals living here through habitat restoration and construction, wildlife monitoring and rescue, and strengthened law enforcement. Protection net.

"The variety and number of wild animals are increasing, which reflects the continuous improvement of biodiversity protection and wildlife protection in Beijing in recent years," said Zhang Zhiming, director of the Wildlife and Wetland Protection Division of Beijing Landscaping Bureau. In the Catalogue of Wild Animals (2021), 596 species of 33 orders, 106 families and 596 species of terrestrial wild animals distributed in Beijing were recorded.

Zhang Zhiming introduced that these 79 nature reserves can be divided into five categories: nature reserves, scenic spots, forest parks, wetland parks and geoparks, with a total area of ​​about 22% of the city's area.

It aims to conserve natural resources, protect biodiversity and geological and landscape diversity, and maintain the health and stability of natural ecosystems through the establishment of protected areas.

Taking the Yanqing District of Beijing as an example, in 2020, the Wild Duck Lake Wetland Nature Reserve innovatively established a bird food source, a bird food field, in the bird's concentrated feeding area, and planted crops for the birds to enjoy.

"Fish live by water and grass, and birds live on good trees." Thanks to the protection measures adapted to local conditions, the species and numbers of wild birds have also increased.

Over the past decade, the wild bird species in Yanqing has grown from 233 species in 2005 to more than 390 species.

In ecological conservation areas, nature reserves provide living space for wild animals; in urban areas of Beijing, with the effect of air and water quality control, wild animals can also be seen in parks in the bustling city.

Since this spring, the swimming tadpoles in the ponds of the Olympic Forest Park have added life to the clear pond, and it has become a reality to "listen to the sound of frogs" in the urban park.

But as water conditions in parks across the city have improved in recent years, more frogs have appeared.

"If the number of frogs increases, reptiles such as snakes will also increase. The more species that coexist, the more stable the food chain will be, the more perfect the ecosystem will be, and the healthier the ecological environment will be." Small and micro wetlands have been built in relevant areas to expand the living space for wild animals.

During the "14th Five-Year Plan" period, Beijing plans to build a total of more than 50 small and micro wetlands, and continue to play the demonstration role of wetlands in purifying water quality and beautifying the environment.

In addition to the natural environment suitable for survival, there are "hard" guarantees for wild animals to live in Beijing.

The new version of "Beijing Wildlife Protection and Management Regulations" implemented in 2020 includes wild animals and their habitats into the scope of protection, and clearly stipulates that all hunting and food are banned in the whole area.

In 2021, the Beijing Wildlife Rescue Center will receive a total of 3,157 wild animals of 252 species and be confiscated by law enforcement agencies such as public security and public security.

"In the next step, the Beijing Municipal Bureau of Landscaping will step up efforts to crack down on behaviors that destroy wildlife resources, improve the efficiency of wildlife rescue, and work with citizens to create a beautiful Beijing where humans and nature live in harmony," said Zhang Zhiming.