Amazon and Twitter: Bolsonaro shows his closeness to Musk

Brazilian President Jair Bolsonaro said on Friday he was counting on Elon Musk to "restore the truth" about deforestation in the Amazon, after discussing with the billionaire a surveillance program... 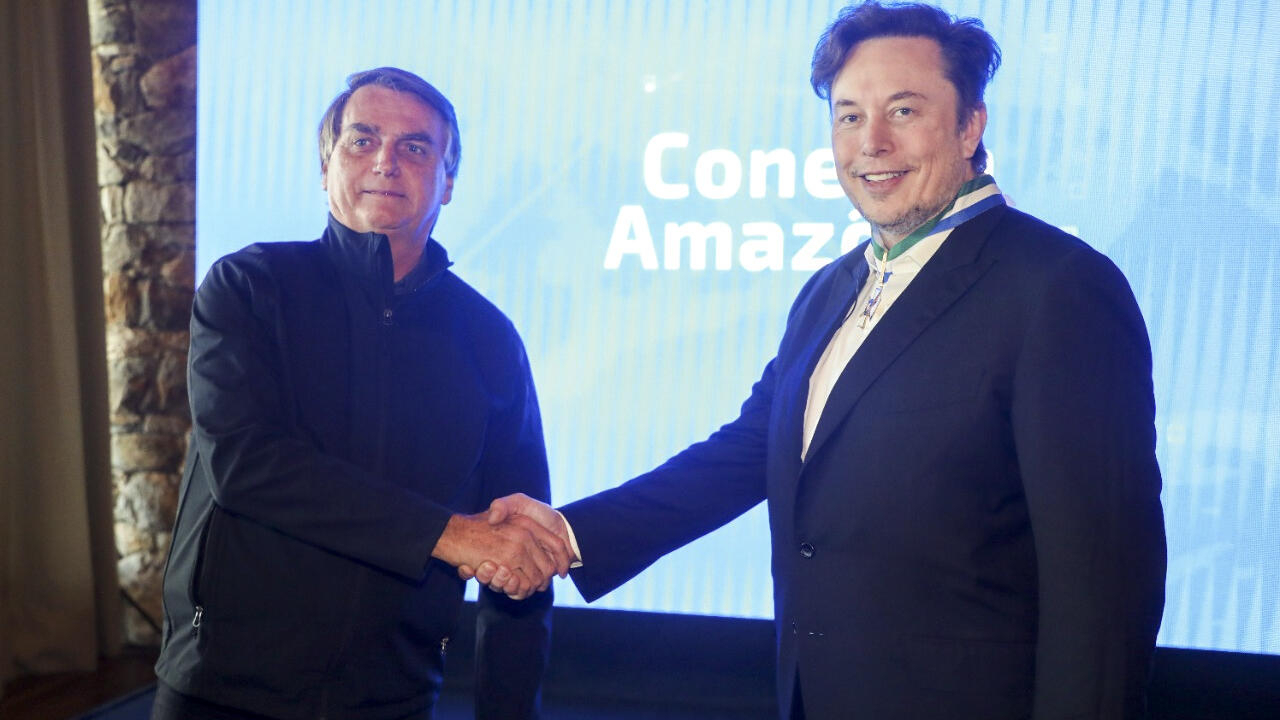 The far-right head of state also returned the elevator to the richest man in the world, supporting the candidate for the takeover of Twitter in his wish for "total freedom of expression" for the social network, without the moderation that helps fight misinformation.

"We must show the world the truth about the Amazon, this region so coveted by other countries. And by showing this truth, we will show that the Amazon is preserved," said Mr. Bolsonaro, much criticized in the world. for the sharp rise in deforestation under his tenure.

"It's a first contact, the beginning of a romantic relationship, I'm sure it will soon lead to marriage," he added during a press conference at which Mr. Musk did not. not participated.

During the meeting, in a luxury hotel near Sao Paulo (southeast), the Brazilian president presented him with the medal of the Order of Merit for Defense.

"I'm super excited to be in Brazil for the launch of Starlink for 19,000 unconnected schools in rural areas and for environmental monitoring in the Amazon," the owner of space company SpaceX tweeted a few hours earlier. of the car manufacturer Tesla.

Starlink allows residents of areas poorly served by fixed and mobile networks to have access to high-speed Internet, via thousands of small satellites.

According to the minister, these satellites are equipped with a “laser system which detects the noise of chainsaws” and makes it possible to “verify whether deforestation is illegal or not”.

Elon Musk "never criticized the Amazon without knowing it, unlike many. He came here to know the truth, to know what the Amazon is", added the minister, who had already announced in November negotiations for SpaceX to deploy satellite internet over the Amazon rainforest and help detect illegal deforestation.

"For Bolsonaro, this meeting is positive," Oliver Stuenkel, professor of international relations at the Getulio Vargas Foundation (FGV), told AFP.

"But it is above all a facade of speech, the specialists believe that the problem of deforestation is not the lack of monitoring, the Brazilian system is very sophisticated. The problem comes from the lack of controls" on the part of the agents of the State, which inflict practically no penalties.

According to a study by the NGO collective Mapbiomas, the environmental protection bodies of the Bolsonaro government only intervened after less than 3% of the deforestation alerts detected by the satellites of the monitoring system currently in force.

The current monitoring system, from the Inpe Space Research Institute, reported deforestation alerts on 1,012 km2 in April, the equivalent of nearly 140,000 football fields, a record for this month of the year.

"The Inpe system is one of the most modern in the world, an example for the monitoring of the tropical forest", assures Marcio Astrini, head of the Climate Observatory, another collective of NGOs for the defense of the environment. environment.

"What Bolsonaro is saying makes no sense. He says that the Amazon is coveted by foreign interests, but he wants to do without the surveillance of a Brazilian institute and rely on a foreign multimillionaire," adds- he.

Elon Musk is at the head of a fortune estimated by Forbes magazine at 230 billion dollars.

He became a hero for the Bolsonarian clan when he announced last month his intention to buy Twitter for 44 billion dollars.

Jair Bolsonaro said Friday that he had felt a "bump of hope" at the announcement of this acquisition, which was finally suspended, Mr. Musk conditioning it on obtaining data on the proportion of fake accounts.

Very active on social networks, the president has had his publications deleted several times for misinformation, including on Twitter.