Another big news today. The motion for appointment of Prime Minister Han Deok-soo as Prime Minister passed the plenary session of the National Assembly after a little strife. Let's call a parliamentary reporter. 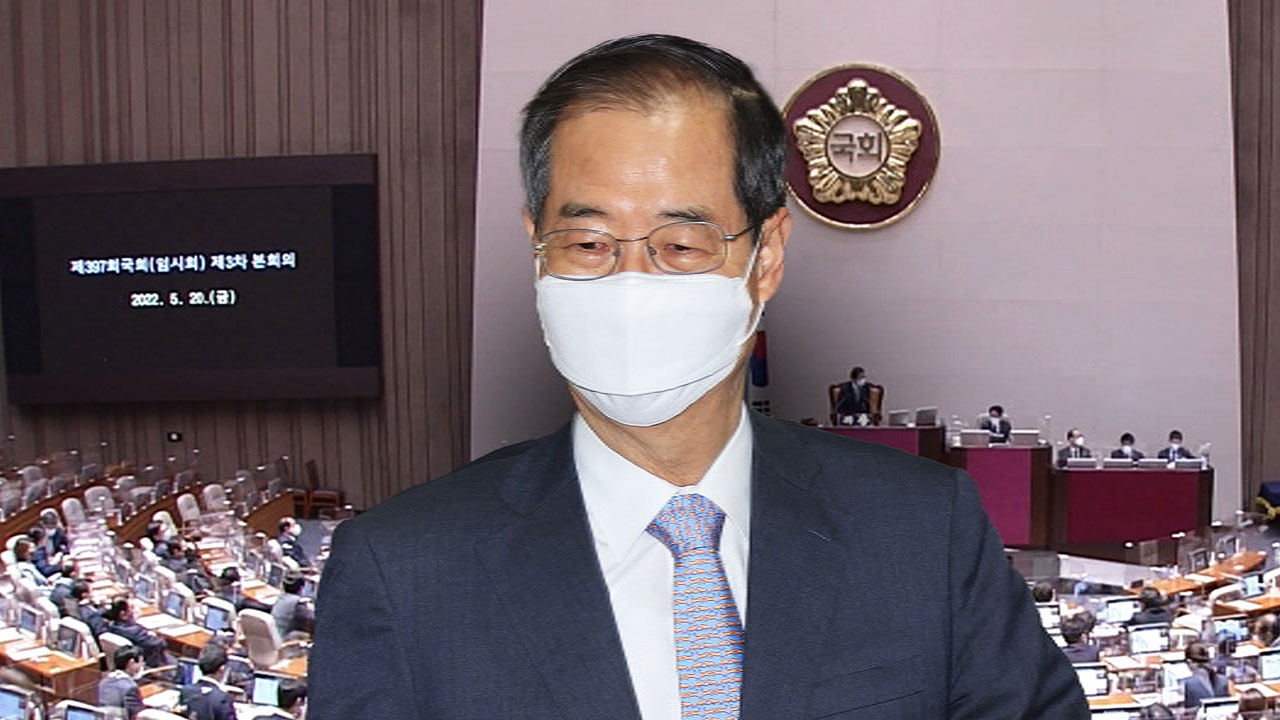 There was another big news today (the 20th).

The motion for appointment of Prime Minister Han Deok-soo as Prime Minister passed the plenary session of the National Assembly after a little strife.

Reporter Hyung-rae Kim, please tell us the news of the approval of the appointment agreement.

At the plenary session of the National Assembly, which started a little while ago, at 6 pm, the motion to appoint Prime Minister Han Deok-soo was passed.

The Prime Minister was approved by the National Assembly 47 days after his nomination and 10 days after the inauguration of the new government.

[Park Byeong-seok / Speaker of the National Assembly: I declare that the motion for appointment of Prime Minister Han Deok-soo has been passed with A 208 votes, 36 negative votes, and 6 abstentions

There were many predictions that the passage of the ratification bill would not be easy in the National Assembly while stipulating it, but the Democratic Party held a general assembly for over three hours, delaying the plenary session originally scheduled for 4 pm, and after much debate, the party decided to break expectations and approve one candidate.

Please tell us about the position of the Democratic Party, which changed the policy from a denial to a vote.

Democratic Party emphasized that it was a win-win cooperation for the stability of the new government, and responded that it would immediately welcome the people's power and that they would continue to cooperate.

Let's listen to the words of the floor leaders of both parties.

Candidate Deok-soo Han for Prime Minister is ineligible, but it is clear that it will be approved.]

[Kwon Seong-dong/People's Power Floor Leader: (Democratic Party lawmakers) sincerely thank you for choosing the party's opinion in this way to vote on the motion to appoint Han Deok-soo as Prime Minister.

At today's plenary session, a 30-day suspension of attendance was passed against Kim Ki-hyeon, a member of the People's Power, for occupying the seat of the Judiciary Chairperson at the time of the vote on the so-called 'check-and-run' bill. criticized.

News of passing the motion to appoint Prime Minister Han Deok-soo Let's analyze it a little more with reporter Hwa Gang-yoon from the Political Department.

Q. What is the background of the sudden change in the position of the Democratic Party?

[Reporter Hwa Gang-yun/Reporter: Above all, I think the influence of the Democratic Party's 'one-top' Lee Jae-myung has been confirmed.

Chairman Lee Jae-myung yesterday (19th) expressed prudence in rejecting the approval bill, saying that it is necessary to consider that the new government is in the preparation stage.

A lawmaker who attended the general assembly reported that pro-Lee Jae-myung-gye lawmakers expressed strong displeasure at the rejection of the approval bill.

It is judged that if it is seen as a hindrance to the new government ahead of the local elections, it can be fatal for constituencies where a close match is held.

From the point of view of Chairman Lee Jae-myung, whose local election report card will determine his political position after the election, I think he was worried about the aftermath that would affect not only himself but also the entire party if he left the approval bill as it is.]

[Reporter Hwa Kang-yun/Reporter: At first, the presidential office was in the position that it would not use Ho-Young Chung's whereabouts as a negotiating card for the Prime Minister's approval.

Yun Ho-jung, the vice chairman of the Democratic Party, also continued to press for the need for the president's decision to win.

A key official in the presidential office said that once the approval bill is passed, the appointment of Chung Ho-young cannot be forced.

This is a passage that is interpreted as saying that President Yoon Seok-yeol can make a decision soon.]

Q. Will the confrontation between the ruling and opposition parties change?

[Hwa Kang-yun/Reporter: It is still too early to say that it will be the starting point of cooperation.

Tensions between the ruling and opposition parties will continue during the local elections, and there is still a big mountain of negotiations for the composition of the National Assembly.

But, at least, the power-to-power confrontation between the ruling and opposition parties has reached a turning point today.

In particular, he expressed his respect for the Democratic Party's cooperation in the power of the people, and made an unusual welcome position.

It is also interpreted as a signal that the passport will respond to something.

On the 23rd, there will be a memorial service for the 13th anniversary of the late former President Roh Moo-hyun.

Following the 5/18 commemoration ceremony, there is a possibility that the passport will continue to make forward-looking gestures.]