The Generalitat Valenciana teaches young people 'chemsex': how to make sex with drugs a "safe practice"

Although chemsex is still a minority practice in Spain, the so-called sex sessions with drugs -to prolong their duration or intensity- have put women on alert... 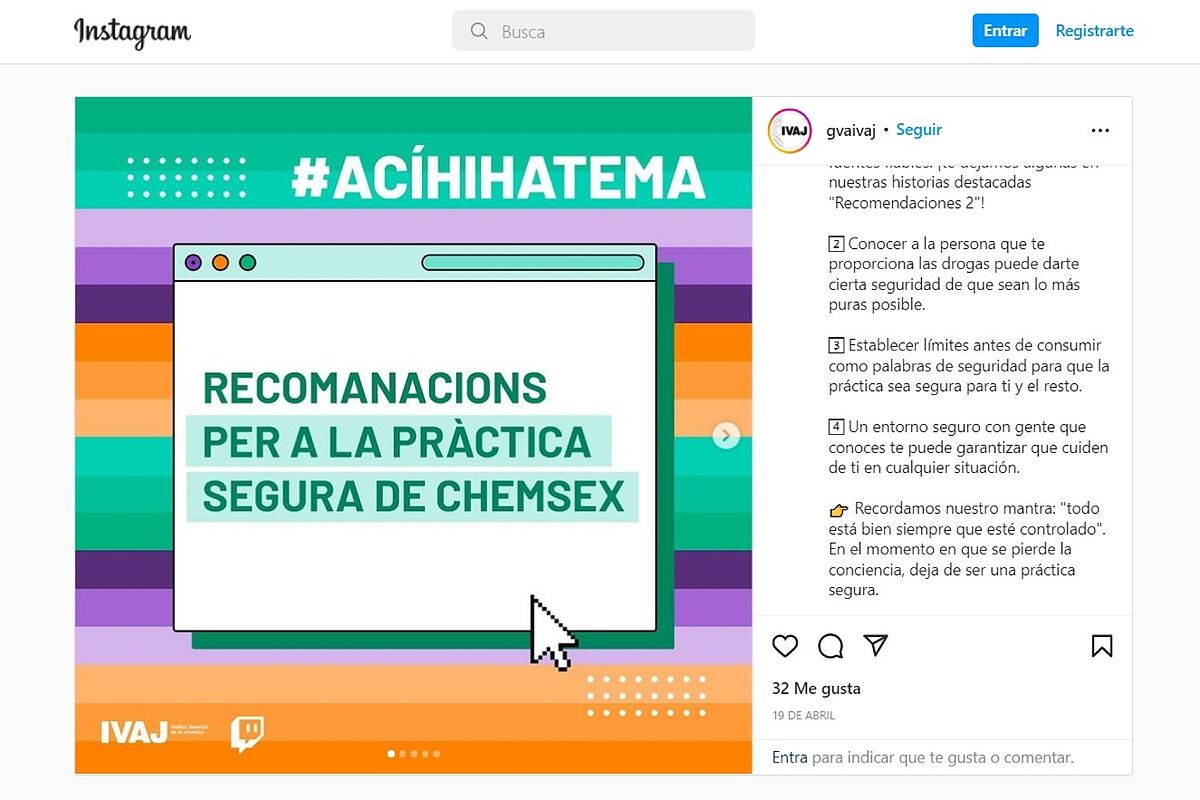 is still a minority practice in Spain, the so-called sex sessions with drugs -to prolong their duration or intensity- have put the health authorities on alert.

However, the Generalitat Valenciana, through the

, has launched a campaign that speaks of

as a "safe practice" as long as some risks are reduced.

The debate about whether drug use prevention campaigns focused solely on prohibition work is still there, but different experts question in this case that it can be spoken of as safe sex when in reality there are drugs involved.

In its social networks, the public body in charge of youth policies launches a series of "recommendations for the safe practice of

Although it is assumed that "it always has certain associated risks", the axis of the message is clear: "We remember our mantra: 'Everything is fine as long as it is controlled'.

The moment consciousness is lost, it is no longer a safe practice."

According to the IVAJ, what are the preventions that must be taken?

Get information from “reliable sources” and even “know the person who provides you with the drugs”, to have “some certainty that they are as pure as possible”.

An approach, by the way, that the sources consulted flatly reject.

The IVAJ also recommends "establishing limits before consuming as safety words so that the practice is safe".

Although from the IVAJ they have avoided making any type of statement, from the

on which the Institute depends, it is argued that it is an issue that is being addressed by various institutions.

The department headed by Mónica Oltra defends the IVAJ campaign which, under the title "There is a topic here", is a proposal that "is broadcast every week on Twitch and in which young people are chatted about affective sex education."

, the perspective of the campaign is valued as "adequate", which "is connected with the line of work of social entities".

However, they consider that "they have made an unfortunate use of the word 'safe'".

There is no 100% safe use of substances,” these sources point out.

Paco Bueno, head of the Addictions service of the

and a renowned expert on the subject, goes further by pointing out from the outset that

is a "public health problem".

Because "usual practices of sexual relations without hygienic-sanitary measures are associated with the consumption of substances."

Therefore, it stresses that "it is not without risks" and, from this point of view, what is important in terms of awareness and prevention is "informing so that the risks of unsafe sex and the consumption of substances that modify health are known." ».

In the opinion of Lucía Hipólito, researcher and doctor in Pharmacy from the

, "all substances have their toxic effects", so "talking about safe practices with drugs is risky".

, the publications of the

point out some of the substances most frequently associated with chemsex: GHB/GBL, mephedrone or other cathinones, methamphetamine, poppers, cocaine, ketamine, ecstasy or even Viagra, «polydrug use being common ».

In a report on

of 2020, the Ministry warns that "there is growing concern about this phenomenon, since the intensive and continuous practice of

can facilitate not only the sexual transmission of HIV and other infections, but also also cause other problems and complications for the physical, mental and social health of the people who practice it.

In fact, according to the Ministry, the figures suggest that in Spain around 3 out of 10 patients seen in HIV consultations have practiced

, since "in the context of

it is common for sex without a condom to be practiced with different sexual partners ».