Switzerland wants at all costs to save its picturesque mountain villages from slow extinction. From gentian roots to juniper, the Gyger brothers distill everything they find in the Jura... 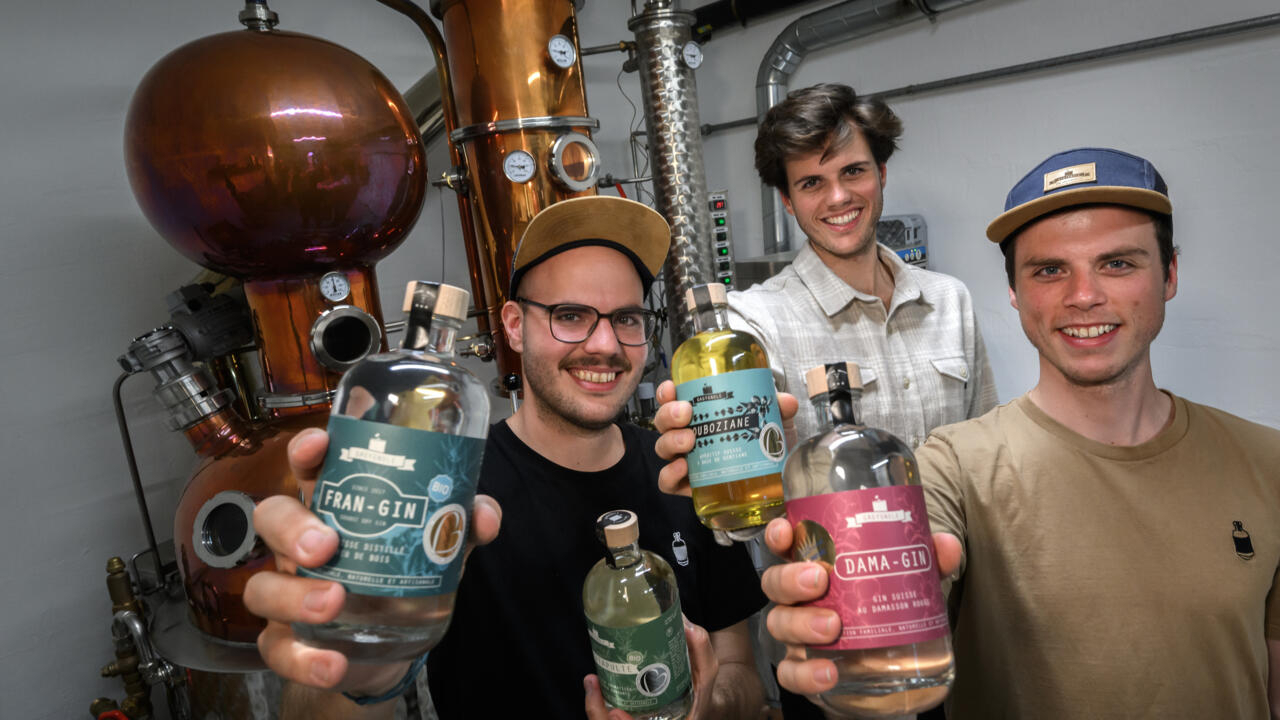 But it was only when these three young nature lovers were able to acquire their own still and transform their grandfather's old apartment with the support of the Swiss Mountain Aid that they were able to professionalize it. about 2-3 years ago, setting up their Gagygnole distillery in the hamlet-rue de Souboz at an altitude of almost 900 m.

On the ground floor of an old farmhouse, the smell of spices - a mixture of coriander and juniper berries - floats in the air, while a warmth envelops the visitor as they approach a still in 2m50 high copper in which the eldest, Gaëtan, known as "Gagy", 30 years old, distills a gin over a wood fire.

"The place of production has been our place of life since we were very young. We really have roots anchored in our village", explains to AFP this agronomist by training who studied in Geneva.

"We didn't want to settle in town" even if the clientele is more numerous there, adds the founder of Gagygnole.

The Gyger brothers in a forest looking for plants for their distillery, May 10, 2022 in Souboz, Switzerland Fabrice COFFRINI AFP

A lifestyle choice that is rare in Switzerland, a 70% mountain country but where less than a quarter of the population lives there.

The mountain villages are emptying out, the grocery stores are closing and, as in Souboz, the schools too, the population preferring to settle in the plain near the agglomerations, in particular Zürich, Geneva and Lausanne, even if Switzerland has not escaped a certain back to nature during covid pandemic.

Faced with the exodus of mountaineers, some villages are trying everything for everything, even going so far as to offer their empty houses for a symbolic franc or offering funds under certain conditions to attract newcomers.

Luca (g) and Gaetan Gyger harvest plants for their distillery on May 10, 2022 in Souboz, Switzerland Fabrice COFFRINI AFP

The Swiss Mountain Aid provides non-refundable contributions to hundreds of entrepreneurs, such as the Gyger brothers.

"If we want the mountains to live, there have to be people. But we are not a work of social aid, we support people who want to undertake and whose project will create employment", explains Willy Gehriger, who chairs this private foundation of public utility.

“We have a bit of a match function,” he explains.

Gaetan Gyger prepares seeds to distil gin in the still of the Gagygnole distillery, on May 10, 2022 in Souboz, Switzerland Fabrice COFFRINI AFP

Created in 1943 to lift mountain dwellers out of misery, Aide à la montagne essentially supported farmers for a very long time, before broadening its field of action a dozen years ago: support for businesses, the installation of Wi-Fi in small accommodation establishments, funding of computer courses, support for the rescue of listed buildings so that tourists can stay there...

"Reducing mountain aid to agriculture would be a mistake", observes Mr Gehriger.

Dressed in t-shirts, caps on their foreheads and iPad in hand, the Gyger brothers have nothing of the cliché of the stocky, rustic and grumpy mountaineer.

Gaetan Gyger monitors the distillation of gin in the still of the Gagygnole distillery, on May 10, 2022 in Souboz, Switzerland Fabrice COFFRINI AFP

It is with humor that they display their ambition: "to repopulate Souboz and recreate a local economy" in the mountains.

"We are still aware that we bring something to Souboz, for good. There is enormous potential for our mountain regions. It's really something we should be proud of as Swiss", assures Luca, 27 years old, second of the siblings.

The bet has paid off since the family business has a few employees and occasionally employs artisans and farmers in the region, in particular for the bottling of their original recipes for gin, whiskey and vodka... 18,000 bottles last year.

Gagygnole sells its flavored eaux-de-vie in 200 points of sale in the country - one of which was voted best gin in Switzerland last year - and its sales of gin fondue are also a hit.

However, there is no question of thinking about exporting.

Tim Gyger arranges bottles of spirits made from gentian roots in the Gagygnole distillery, May 10, 2022 in Souboz, Switzerland Fabrice COFFRINI AFP

“We always refused a bit because it was difficult in terms of logistics, but why not … as long as it goes with our philosophy”, slips Tim, 26, the youngest.