Biden: Sweden and Finland meet all criteria to join NATO

US President Joe Biden confirmed Thursday that Sweden and Finland meet "all the criteria" for joining the North Atlantic Treaty Organization "NATO". 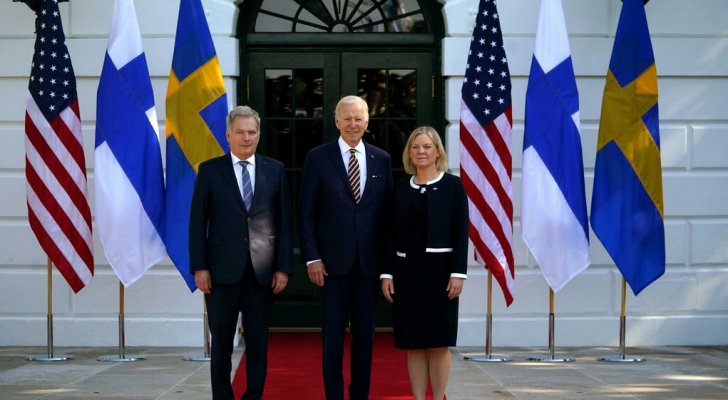 Biden: Sweden and Finland meet all criteria to join NATO

US President Joe Biden said Thursday that Sweden and Finland meet "all the criteria" for joining the North Atlantic Treaty Organization (NATO).

"Today, I am proud to assure them of the full and complete support of the United States of America," Biden said, along with Swedish Prime Minister Magdalena Andersen and Finnish President Sauli Niinisto, who are visiting the White House the day after submitting the official candidacy for their countries' accession.

Biden reiterated that the United States will "work with" the two countries located in northern Europe "to confront any aggression" they may be exposed to during the period between candidacy and accession.

For his part, the Finnish president affirmed that he is "ready to discuss" with Turkey all the issues that raise its "concern", in order to contain Ankara's opposition to Finland and Sweden joining NATO.

"As allies within NATO, we will defend Turkey's security," Niinisto said during his visit to Washington, "We condemn terrorism in all its forms," ​​noting that the Turkish authorities take the two countries under the auspices of elements of the Kurdistan Workers' Party (PKK).

In turn, Swedish Prime Minister Magdalena Andersen announced that there is an ongoing "dialogue" with Turkey with the aim of "solving" these issues.

Washington is optimistic about its ability to bypass the Turkish opposition.

Biden confirmed that he would refer the issue of the candidacy of Finland and Sweden to Congress for approval "as soon as possible."

"When new members join NATO, it is not a threat to any country and it has never been this way. The goal of the alliance is to defend itself against aggression," the US president said.

He also mentioned that the fifth article of the Treaty of the Alliance was used only once, which provides for a common response from all its members in the event of an attack by one of these members.

He stated that this happened after the attacks of September 11, 2001, and "all our allies stood by our side" at the time.