Students: The journey out of the school perimeter takes 60 minutes

Students with students demanded to intensify the presence of traffic patrols in the vicinity of schools in Abu Dhabi, especially during the periods going and return of students, to and from school, and to tighten penalties for violating drivers, who cause their random stops to obstruct traffic and traffic, as well as for the concerned authorities to 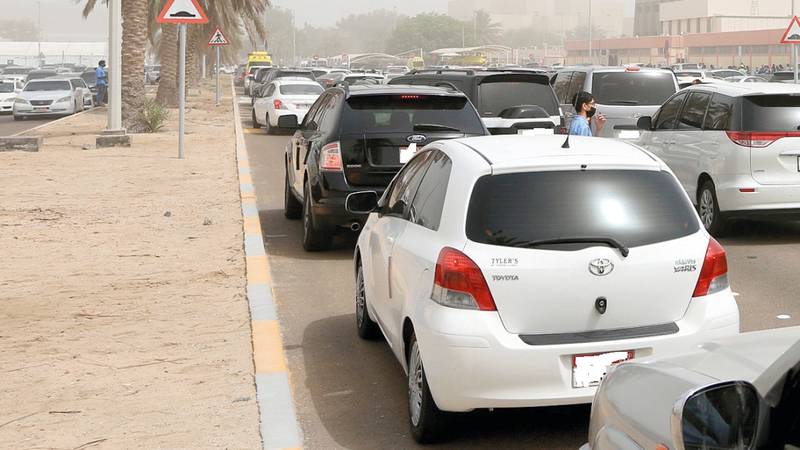 Students: The journey out of the school perimeter takes 60 minutes

Heavy traffic around a school.

Students with students demanded to intensify the presence of traffic patrols in the vicinity of schools in Abu Dhabi, especially during the two periods going and returning students, to and from school, and to tighten penalties for violating drivers, who cause their random stops to obstruct traffic and traffic, as well as the relevant authorities to organize awareness campaigns on the importance of commitment Traffic and safety laws in the vicinity of schools.

They stressed that the journey out of the vicinity of some schools in Abu Dhabi, until reaching the public road, takes about an hour, as some students' families obstruct the movement of the road due to random parking, and the insistence of many of them to stand in front of the school door to pick up their children.

Abu Dhabi Police warned drivers against random parking, calling for the use of parking spaces at schools, to avoid obstructing traffic.

She stated that the Federal Traffic and Traffic Law in Article 62 stipulates the prohibition of stopping vehicles at road junctions and bends, as a fine of 500 dirhams is imposed on violators.

Article 70 of the Federal Traffic and Traffic Law stipulates a violation of “vehicle drivers’ failure to comply with traffic signs and instructions” with a fine of 500 dirhams.

In detail, students expressed their suffering due to traffic congestion in the vicinity of schools, as they spend a long time before they can get out to public roads, as a result of the traffic density and random parking of vehicles, and the lack of commitment by some drivers to the rights of others to cross.

Omar Ahmed stressed the importance of encouraging the use of mass transportation for students, and providing alternatives at reasonable prices, to reduce the use of a parent's vehicle to transport his son to school, which would reduce congestion on the roads in the vicinity of schools.

Muhammad Sadiq stated that with the return of the third semester at the end of the month of Ramadan, the phenomenon of congestion remarkably returned, especially on Fridays, which also witness the departure of employees at the time of students’ exit, proposing to tighten traffic control procedures, and raise awareness of the consequences of wrong behaviors, such as parking. Random, and re-planning some of the roads surrounding the schools, to achieve smooth entry and exit from the school perimeter.

Abu Hazaa agreed with him, as he pointed out that some parents leave their vehicles on the road and go down to pick up their children from school, without regard for the rights of others, which causes obstruction to traffic, suggesting that the punishment for such irresponsible behavior be intensified.

He stressed the importance of accompanying this with the intensification of traffic awareness programs, which would create a societal culture that is aware of the negatives of random parking and obstruction of traffic, and endangering students' lives.

Others considered that crowding around schools is a general phenomenon at the state level, citing its causes to three factors, namely the random alignment of vehicles with students' families, the lack of sufficient parking, and the absence of traffic patrols.

For its part, Abu Dhabi Police called on drivers to pay attention while driving their vehicles, reduce speeds near schools, adhere to safe driving, and cooperate with traffic police to enhance the flow of traffic, to avoid accidents.

The families demanded attention while transporting their children to schools, not allowing those under the age of ten to sit in the front seats, helping them cross the streets, and using the spaces designated for parking vehicles at schools, to avoid obstructing traffic.

She urged school bus drivers to stop in designated and safe places, and to give students the opportunity to be able to board and sit in the seats, and to make sure they got off, and not to approach the buses before they moved, and to turn on the side (stop) signal for buses when going up and down.

The Traffic and Patrols Directorate confirmed its keenness to intensify awareness programs to enhance positive traffic behaviors for various segments of society of road users, and to familiarize them with the laws and regulations, in order to provide the highest standards of traffic safety for our students while they are on their way to and back from their schools.

Abu Dhabi Police is keen to deploy traffic patrols at intersections and internal and external roads, in order to preserve the safety of students while heading to and leaving schools, in addition to educating drivers about the importance of paying attention while driving their vehicles, reducing speeds near schools, committing to safe driving, and cooperating with traffic patrols. In enhancing the smooth flow of traffic, to avoid accidents.

• Abu Dhabi Police called on drivers to be careful while driving their vehicles, and to reduce speeds near schools.