"In a work meeting for future plans, in the rescue of the spirit of Mexico". Chavismo and the opposition have returned to dialogue with the intention of resuming... 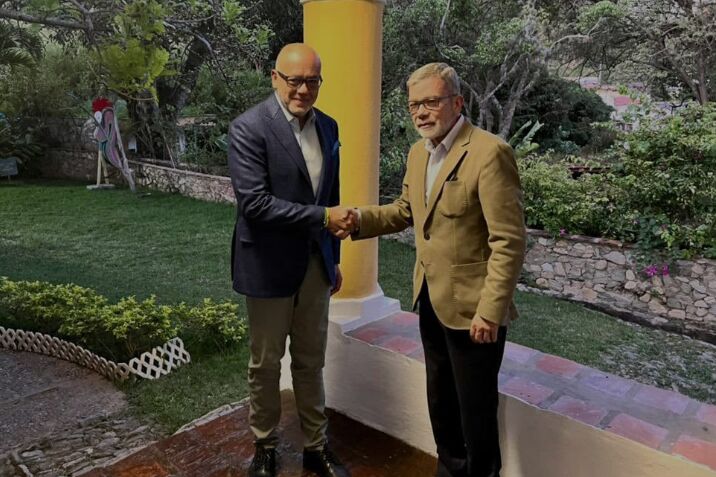 "In a work meeting for future plans, in the rescue of the spirit of Mexico".

immediately resuming the negotiations in Mexico,

sponsored by the Norwegian government and with the support of the international community.

This was announced this Tuesday by the heads of the two delegations,

president of the parliamentary body of the revolution, and the constitutionalist

Both tweeted the same image, in which they shake hands, and the same text, the one that opens this chronicle.

"Formal talks have begun with our counterpart in order to achieve its prompt reactivation (in reference to the negotiation process that began in Mexico City in August last year)," the opposition Unity Platform confirmed in a statement.

It was precisely the formation of

made up of 10 parties, one of the conditions required by Washington to support the return to Mexico, whose dialogue was unilaterally suspended in October by

after the extradition to the US of Colombian tycoon

considered the largest international operator of the Bolivarian revolution and the presumed figurehead of the "son of Chávez",

Rodríguez, after the meeting with Blyde, insisted that Saab is one of his delegates for the meeting in Mexico, one of the blocking stones during the seven months of political paralysis.

Maduro played the Saab card as

a false diplomat to force his release,

despite the fact that he was appointed ambassador months after being detained in Cape Verde.

channel of communication between the two parties,

in addition to causing the release of three US prisoners in Venezuela and recovering the negotiation in Mexico, despite which took two months to complete.

It was Washington that slowed down the process in the face of internal criticism aroused by the mini-summit and only now have they agreed to two of Maduro's demands.

The first is the authorization for the

oil company to return to operating in the wells of Venezuela, just as it did before the sanctions.

would also receive a special license to operate in Creole lands.

Another of the requests, according to US officials confessed to the AP agency, has not yet materialized.

It is about the

withdrawal of the personal sanction for the favorite nephew of Cilia Flores,

The person mentioned, Carlos Malpica Flores, is a powerful former official who has always moved in the shadows of the presidency without leaving excessive traces.

He was national treasurer, vice president of Finance of Petróleos de Venezuela (PDVSA) and general director of the Development Bank (Bandes).

"We are going to alleviate the pressure based on actions, concrete results, that lead Venezuela to free elections. If there is a setback, then we will reapply the sanctions," explained Juan González, Biden's main adviser for Latin American affairs.

The news, expected for days, comes only

of Spanish origin and a career diplomat, characterized by a dialogue profile.

In an obvious nod to his ally Vladimir Putin, the "people's president" has replaced the engineer Carlos Faría, until now Chavista ambassador in Moscow and a person he trusted.