China Overseas Chinese Network, May 17th: The latest reminder from the embassy and consulates is here! Involved in terrorist attacks, vicious cases...   Recently, some countries have experienced terrorist attacks, social unrest, natural disasters and other situations. Many embassies and consulates abroad have issued safety reminders, calling on overseas compatriots to protect themselves. Ethiopi 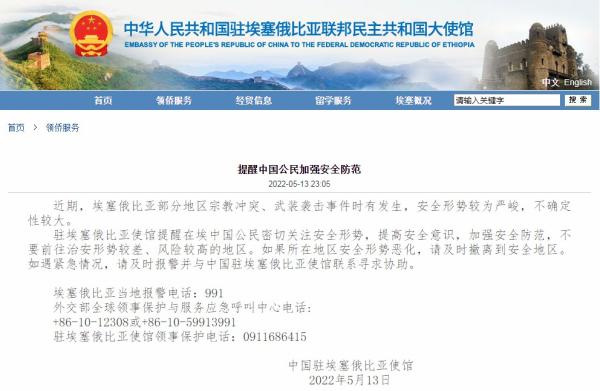 China Overseas Chinese Network, May 17th: The latest reminder from the embassy and consulates is here!

Recently, some countries have experienced terrorist attacks, social unrest, natural disasters and other situations. Many embassies and consulates abroad have issued safety reminders, calling on overseas compatriots to protect themselves.

The embassy calls for stronger precautions

Recently, in some areas of Ethiopia, religious conflicts, armed attacks and other incidents have occurred from time to time, and the local security situation is relatively severe and uncertain.

In this regard, the Chinese embassy in Ethiopia reminds Chinese citizens in Ethiopia to pay close attention to the security situation, strengthen security precautions, and not to go to areas with poor security and high risks.

If the security situation in your area deteriorates, please evacuate to a safe area in time.

On May 6, local time, Sri Lankan President Gotabaya Rajapaksa announced that the country will enter a state of public emergency from midnight that day to maintain social order.

On May 9, bloody clashes occurred in Colombo, the capital of Sri Lanka, and caused heavy casualties.

It is understood that in recent weeks, protesters in Sri Lanka have launched successive protests, demanding that the government quickly resolve the economic crisis facing the country due to the severe economic crisis affecting multiple sectors and causing shortages of basic necessities.

In response to this situation, the Chinese Embassy in Sri Lanka issued two security reminders on the 9th and 12th, reminding Chinese citizens and institutions in Sri Lanka to increase their awareness of self-protection, maintain a high degree of vigilance, track the security situation, and make security precautions and emergency reserves.

In addition, Chinese citizens in Sri Lanka are requested not to go out unless necessary, and do not participate in or watch any protests or gatherings to ensure personal and property safety.

Recently, Nepal has gradually entered the rainy season, and the rainfall across the country has increased significantly.

During the rainy season in previous years, Nepal has experienced many geological disasters such as flooding, landslides and road collapses, resulting in casualties and property losses.

These disasters have brought huge threats to the transportation, business personnel and construction safety in Nepal.

Therefore, the Chinese Embassy in Nepal reminds Chinese citizens in Nepal to pay close attention to local weather conditions, choose safe and reliable travel tools when traveling, try to avoid staying overnight in low-lying areas, pay attention to preventing flash floods and natural disasters, and do not swim in rivers without authorization .

In addition, according to the relevant regulations of the Nepalese and Chinese governments during the COVID-19 epidemic, all ports in China, including Geelong, Zhangmu, Pulan, etc., continue to close the entry and exit channels for personnel, and strictly prohibit the passage of personnel.

The Chinese Embassy in Nepal reminds Chinese citizens in Nepal to abide by the relevant regulations of China and Nepal and not to go to the above-mentioned ports.

According to statistics from local medical institutions in Zimbabwe, recently, the infection rate of new coronary pneumonia in Zimbabwe has increased significantly, with an average daily positive detection rate of about 25%.

Image source: Website of the Chinese Embassy in Zimbabwe

At present, some countries in southern Africa have detected the new BA.4 and BA.5 strains of Omicron, the number of confirmed cases has risen sharply, and the epidemic situation is still severe.

The Chinese Embassy in Zimbabwe reminds Chinese-funded enterprises, institutions and overseas Chinese in Zimbabwe to maintain vigilance and sensitivity in epidemic prevention and control, adhere to various prevention and control measures, overcome paralysis and slackness, and detect suspected symptoms as soon as possible. Corresponding isolation measures to avoid cross infection.

Relevant enterprises and institutions should earnestly perform their main responsibilities and make every effort to maintain the health and safety of their personnel.

On May 11, local time, the Togolese Ministry of Security issued a communiqué stating that a terrorist attack on a forward outpost carrying out security operations in the Togo-Burkina Faso border area resulted in the death of 8 military personnel and injuries to 13 others.

This is the second terrorist attack in Togo in recent years, and the first with reported casualties.

Image source: Website of the Chinese Embassy in Togo

In order to ensure the safety of Chinese citizens, the Chinese Embassy in Togo reminds Chinese citizens in Togo to pay close attention to the situation, avoid going to the northern border areas as much as possible, and reduce unnecessary going out.

At present, the security situation in Nigeria is still complicated and severe. Vicious cases such as armed kidnappings have occurred in the consular area of ​​the Chinese Consulate General in Lagos from time to time, and the security risks faced by Chinese citizens and institutions have further increased.

According to reliable information, a large number of kidnapper gangs have appeared in the jungles of Auchi, Fugar, Othame and other places in Edo State recently, and may flee to other areas of Edo State, waiting for opportunities to kidnap employees of Chinese companies.

In this regard, the Chinese Consulate General in Lagos urgently reminds Chinese citizens and enterprises in Edo State to maintain a high degree of vigilance, effectively strengthen security measures such as civil air defense, material defense, and technical defense, and increase the security of camps, residences, work sites and moving. Investing, not going out unless necessary in the near future, strengthening the collection, research and judgment of security information in the area where you are located, and strictly preventing the occurrence of kidnapping cases.

Xiaoqiao reminds: Chinese citizens abroad should pay close attention to the notices of the local Chinese embassies and consulates, and follow the relevant instructions to protect themselves.

In the event of an emergency, please call the police in time and contact the embassy or consulate for help as soon as possible!