The impact of the “dust storm” on the state ends today

The National Center of Meteorology expected the end of the effects of the dust storm that hit many Arab Gulf countries, and some areas in the country, today, noting that the dust-laden winds will gradually ease over the coming days, with the continued presence of active northwest winds, 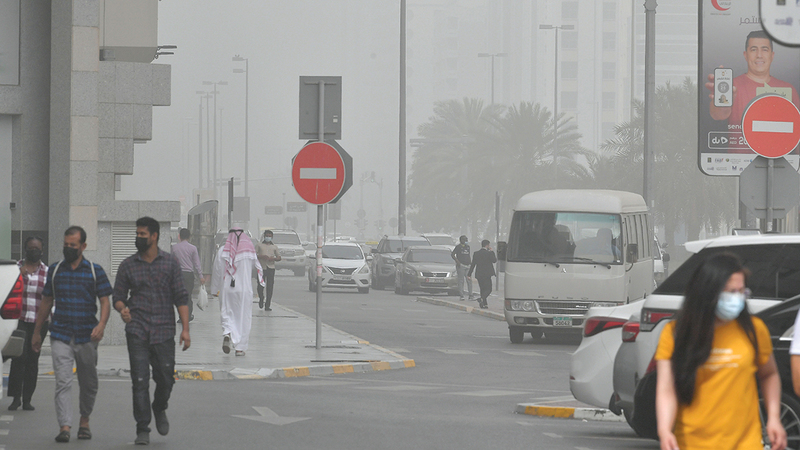 The impact of the “dust storm” on the state ends today

The state is exposed to winds that raise dust and dust.

The National Center of Meteorology expected the end of the effects of the dust storm that hit many Arab Gulf countries, and some areas in the country, today, noting that dust-laden winds will gradually ease over the coming days, with the continued presence of active northwest winds, which leads to raising dust. and dust, away from the effects of the storm.

The center confirmed that the mass of loaded dust that the Gulf countries witnessed, the day before yesterday, which led to almost zero visibility, moved yesterday morning towards the country, and its impact began in the western region, which witnessed a low level of visibility of less than 500 meters in some areas, including commodities, pointing out He indicated that visibility rates were almost non-existent (less than 100 meters) in some areas of the sea, including Umm Al-Sheif.

The center informed «Emirates Today» that the mass of dust extended to some coastal and interior areas, after it moved towards the south, which led to a decrease in the range of horizontal visibility over most areas of the Arabian Gulf, and the mass also affected some areas of the country gradually, while the loaded dust gradually decreased today. As the country continues to be affected by northwesterly winds that raise dust and dust, the horizontal visibility sometimes decreases.

The National Center of Meteorology attributed this storm to the region being affected by an air depression from the east, with an air rise coming from the west, which caused a “pressure decline”, which left active and strong northwesterly winds, which led to stirring dust and storms in the State of Iraq, pointing out that with The wind moved in the direction of the south of the Arabian Gulf, carrying the dust mass with it, which led to a low level of visibility in many areas of the countries it passed through, whether in the Kingdom of Saudi Arabia, Bahrain and Qatar, all the way to the west of the UAE, yesterday morning, where the level of visibility was less than 1000 meters in several areas, and in other areas of the sea, the visibility was less than 100 meters.

He stressed that the impact of the dust-laden mass extends to some interior and coastal areas in the country, but gradually and with less force, as the level of visibility with it reaches between 5 and 3000 meters.

May witness a gradual rise in temperatures over most regions of the country.

It is expected that depressions will affect the region during the current month, as an air depression extends from the west or east, and when accompanied by the extension of upper air depressions heading from west to east, the amounts of clouds increase in some areas with the chance of rain, while the humidity decreases. In the air with the second half, with the continuation of chances of fog and light fog forming over separate areas, especially during the first half of it, and its recurrence less in the coming days.

The highest recurrence of fog was during May 2016, where the number of recurrences of fog was two days, and 11 days of light fog, while the highest amount of rain recorded during May was 134.4 mm over the Al-Fali area in 1981.