Editor's note: Since the 18th National Congress of the Communist Party of China, General Secretary Xi Jinping has uttered many golden sentences containing the power of truth, thought, wisdom and personality on different occasions, which are deeply rooted and thought-provoking. CCTV's "People's Leader Xi Jinping" column has launched a series of creative and interactive special articles "A New Era o 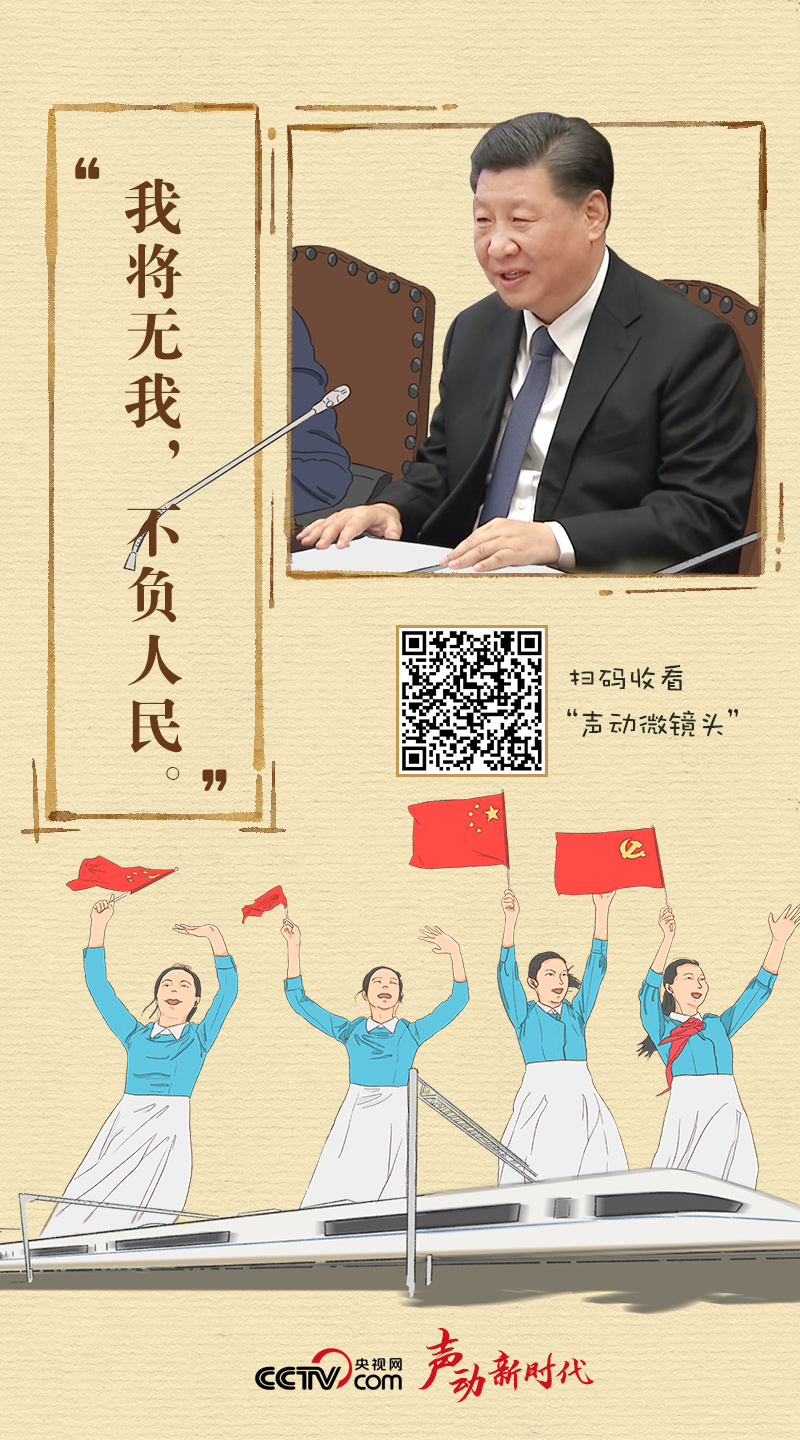 Since the 18th National Congress of the Communist Party of China, General Secretary Xi Jinping has uttered many golden sentences containing the power of truth, thought, wisdom and personality on different occasions, which are deeply rooted and thought-provoking.

CCTV's "People's Leader Xi Jinping" column has launched a series of creative and interactive special articles "A New Era of Sound and Movement". Together with you, you can comprehend the deep meaning contained in the widely circulated golden sentences of the General Secretary, and learn the strength to move forward.

"I will be without me and not let down the people."

In 2019, in the face of questions from foreign dignitaries, Xi Jinping blurted out these words, which are unforgettable.

In diplomatic settings, leaders are occasionally asked what their governing philosophy is.

As the head of state of a country with a population of more than 1.4 billion, Xi Jinping's answer was frank and simple.

"The Communist Party of China insists on governing for the people, and the people's yearning for a better life is our goal. My governing philosophy can be summed up as: serve the people and shoulder the responsibilities that should be undertaken." Accepted on February 7, 2014 In an exclusive interview with Russian TV, Xi Jinping said this.

The Communists' "I will have no self" and "I will live up to the people" are closely linked.

In 1974, the 21-year-old Xi Jinping was serving as the secretary of the Party branch of the production brigade. "Let the villagers have a full meal of meat, and often eat meat" is his wish.

In 1982, the 29-year-old Xi Jinping was serving as the deputy secretary of the county party committee.

In 1990, the 37-year-old Xi Jinping was serving as the secretary of the municipal party committee, and he wrote the words, "Serve as an official, benefit one party, and smooth business".

All the way from the Yellow Earth, from the secretary of the Party branch of the rural production brigade to the top leader of the great country, Xi Jinping has put the people's food, clothing, warmth and safety in mind, and has implemented it into all aspects of state governance.

"People's yearning for a better life is our goal."

On November 15, 2012, Xi Jinping, who had just assumed the post of General Secretary of the Central Committee of the Communist Party of China, faced the camera of Chinese and foreign reporters, and in the intensive shutter sound, he clearly expressed his responsibility of "I will not be myself" and the feeling of "living up to the people".

Five years later, he was re-elected as general secretary of the CPC Central Committee. He firmly said 16 words: perform duties, work diligently, live up to the mission, and live up to heavy trust.

On October 25, 2017, Xi Jinping cordially met with the representatives, specially invited representatives and non-voting attendees of the 19th National Congress of the Communist Party of China in the Great Hall of the People in Beijing.

The career has a long way to go, and the responsibility is heavier than Mount Tai.

Xi Jinping vowed to "let the poor and impoverished areas enter into a comprehensive moderately prosperous society together with the people of the whole country", and to this end he has traveled all over China's contiguous destitute areas.

In eight years, nearly 100 million rural poor people under China's current standards have all been lifted out of poverty. This fight against poverty, unprecedented in human history, has been hailed by the United Nations as one of China's greatest contributions to the world.

"He is not only in the office, but goes deep into the people. He is very approachable, and his clothes, speech, smile, etc. are very down-to-earth. I see that in rainy days and under the scorching sun, he does not need others to hold an umbrella." Report to the 19th National Congress of the Communist Party of China One of the nine foreign translators, Laos expert Ramon Joviji, was deeply impressed by Xi Jinping's closeness to the people.

"I have climbed that mountain for a long distance, and I finally got there. After I went there, an old lady met me and asked, may I ask your surname, where did you come from?" In November 2013, he visited Shibadong Village in Xiangxi, Hunan Province. Xi Jinping was deeply impressed.

On that day, he introduced himself to the villagers: "I am the people's attendant."

Each story is inspiring.

The reform has entered the deep water area, and the rest are hard bones that are hard to crack.

He carefully reviewed every draft of the major reform plan and revised it word by word.

After the outbreak of the new crown pneumonia, on the 30th day of the Lunar New Year, he could not sleep at night. The next day he chaired the meeting of the Standing Committee of the Political Bureau of the Central Committee to study countermeasures.

He worked with poor households to calculate the household income and expenditure, talked with village officials about how to sell local liquor to increase farmers' income, and also helped to be a "carrying clerk" for the online store.

He took a photo with the workers in the rain, went to the alley to greet the courier brother for the New Year, picked up a shovel and strode to the tree planting site.

He is concerned about garbage classification in urban communities, whether the villagers have hot water for bathing, whether electricity is expensive, and where the tap water comes from, and he also makes suggestions for reducing the incidence of myopia among primary and secondary school students.

Governing a country with a population of more than 1.4 billion is an arduous task and a daunting task.

Public opinion at home and abroad commented on Xi Jinping, saying that he is a practitioner of the concept of "people first".

On April 15, 2019, Xi Jinping had a cordial conversation with students at Zhongyi Township Primary School in Shizhu Tujia Autonomous County, Chongqing, asking them about their studies and life.

"Since being appointed, I have been sighing at night, and I am afraid that the entrustment will not be effective." Navigating the new era, Xi Jinping once quoted Zhuge Liang's "Apprenticeship" to express his feelings.

He believes that "there is nothing difficult in the world", and admits that his personal time is taken up by work.

According to an authoritative person in the General Office of the Central Committee of the Communist Party of China, no matter how late a request for instructions is submitted to Xi Jinping, even if it reaches 12 o'clock at night, he can receive his instructions the next morning.

In 2019, students from the Chinese class of North Niles High School in Illinois, USA, asked curiously in a letter to President Xi Jinping - "Do you like your work? Is your work tiring?"

"My job is to serve the people. It's tiring, but very enjoyable," Xi Jinping replied in his reply, which is what he has been insisting on for decades.

In the spring of 2021, a dialogue that took place in Maozhushan Village, Guilin, Guangxi swiped the screen on the Internet——

"General Secretary, you are usually so busy and come to see us. Thank you very much."

"I am busy with these things. The 'bigger of the country' is the happy life of the people."

One question and one answer, expressing the feelings of a child; from the Yellow Earth to Zhongnanhai, the original intention remains the same.