"A major problem for the country": Moldova faces the ubiquitous Russian propaganda

Since the beginning of the offensive in Ukraine, the Kremlin's pro-war discourse has been spreading in Moldova, benefiting from a presence of numerous Russian media in the media landscape for many… 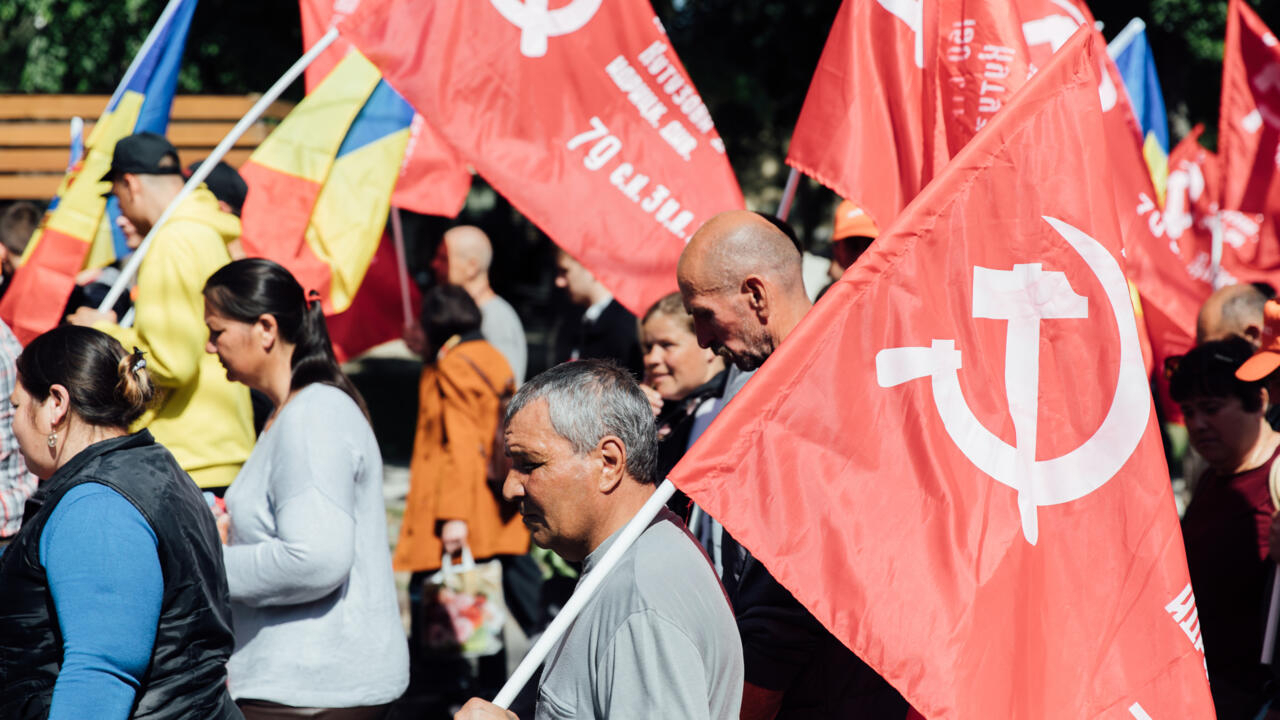 "A major problem for the country": Moldova faces the ubiquitous Russian propaganda

Several flags in the colors of the USSR flew in Chisinau, the Moldovan capital, during a rally to commemorate "Victory Day", May 9, 2022. © RFI / Valentin Cebron

Since the start of the offensive in Ukraine, the Kremlin's pro-war discourse has been spreading in Moldova, benefiting from the presence of many Russian media in the media landscape for many years.

”, concedes Liliana Nicolaescu-Onofrei in the precincts of Parliament.

Installed in her office where several piles of files lie, the president of the Media commission has her work cut out for her.

In a few weeks, new legislation defining in particular “disinformation” must be adopted by the deputies.

The text aims to reduce the influence of Russian bodies in the country.

Because, she says, they feed divisions within a population split between pro-Russians and pro-Europeans.

Especially since the start of

the invasion of Ukraine.

To counter the narrative of the

, the authorities are using derogations allowed by the state of emergency put in place since February 25.

Several programs or channels have been banned.

For its part, the Audiovisual Council (CA) in Moldova is particularly vigilant.

He distributes fines and warnings with a vengeance.

Thus, the channels RTR Moldova, NTV Moldova – partly financed by a socialist deputy – or even Primul in Moldova have all been sanctioned by fines ranging from 5,000 to 10,000 euros by the Moldovan audiovisual policeman.

Overall, the analysis paints a picture in which the Ukrainian, American and NATO authorities are criminal, provocative and unwilling to bring peace to the region, while Russia has the role of peacemaker and guide. always its actions by the diplomatic factor

”, estimates for example the CA in connection with an emission of RTR, chain held at 50% by a Russian organization.

"We have no power

But the vast media empire close to the Kremlin is thriving.

Via cable operators, satellite or television, the Russian media always target our population

", deplores the deputy of the pro-European majority, Liliana Nicolaescu-Onofre.

In Gagauzia, for example, a Russophile autonomous region in the south, television channels that have been banned continue to be broadcast.

To cite just one:

, well known for its broadcasts which evoke a “

” in Ukraine or the fighting to “

To the east, on the left bank of the Dniester, Transnistria – a pro-Russian separatist enclave that escapes the control of the Moldovan authorities – is lulled by Kremlin propaganda.

Disinformation has existed since the creation of this territory,

explains Irina Tabaranu, a local journalist specializing in the region.

State broadcasters have been spreading the same message for years: Moldova is an aggressor country

At the end of April,

a series of explosions inside this self-proclaimed state

, where some 1,500 Russian soldiers are stationed, revived the specter of an extension of the conflict.

,” says a Transnistrian, in his twenties, met in Chisinau.

On social networks, false images showing that Romania is preparing its troops to attack Transnistria are circulating

," adds the young man who recently left this state recognized by no other, not even Moscow.

Near the Transnistrian border, even in controlled territory, the television and radio signal from Transnistria emits stronger than that of Moldova

In Gagaouzia and Transnistria, we have no power

Since the fall of the USSR and the birth of present-day Moldova, Moscow's propaganda has never stopped.

A major problem for the country,

because here it can spread freely

An expansion notably allowed by the local political allies of Russia who own several press organs.

Forbidden for the first time between 2017 and 2020, certain Russian programs were again able to be broadcast on the territory because of the socialist opposition

If Moscow has been able to weave its media web over the country, it is partly due to a lack of interest on the part of successive authorities.

The media system has never been a priority for governments.

It was total chaos for 30 years

Major challenge of the current government: to set up a development program for inclusive national media, specifies Liliana Nicolaescu-Onofrei.

We need quality information for all citizens, both in Romanian

, but also in Russian

► Also to listen: The mechanics of Russian propaganda