The occupation storms a cemetery and arrests mourners.. Dozens of injuries in Jerusalem in clashes during the funeral of the martyr Walid

72 Palestinians were injured in clashes that took place yesterday evening, Monday, in the vicinity of the Mujahideen cemetery in Jerusalem, after the occupation forces attacked the funeral of the martyr Walid Al-Sharif, and the occupation stormed the cemetery in which the martyr was buried, and mourners were arrested inside. 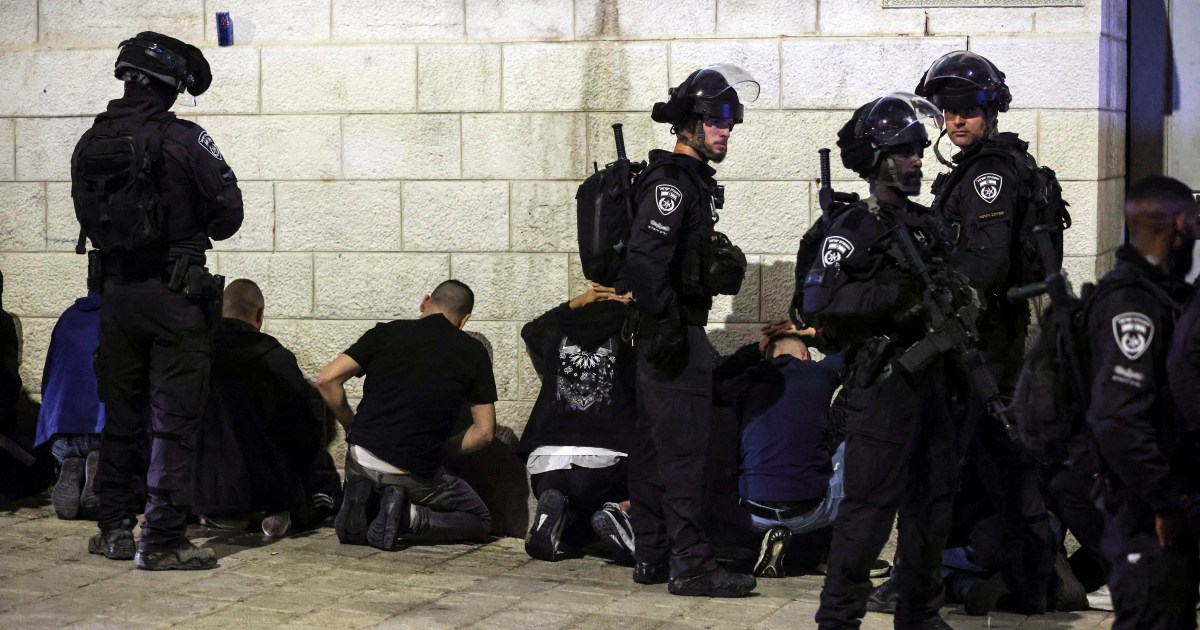 The Red Crescent statement added that "13 injuries were transferred to the hospital for treatment, including two injuries to the eye."

He added, "The injuries were caused by rubber bullets, beatings, sound bombs and suffocation...One of the cases was a paramedic who suffocated."

The occupation authorities handed over the body of the 23-year-old martyr to his relatives this evening, Monday, at the Israeli police station in the Sheikh Jarrah neighborhood, adjacent to the Temple Mount.

Al-Jazeera correspondent in Jerusalem Wajd Waqfi said that the occupation police assaulted the mourners and prevented them from raising the Palestinian flags, and arrested dozens of Palestinians during the funeral. The occupation forces amounted to 12.

The mass funeral had left the blessed Al-Aqsa Mosque after the worshipers performed the evening and funeral prayers, and the crowds marched towards the Mujahideen cemetery to bury the body.

On the other hand, the Israeli police said in a statement, “Scattered areas in East Jerusalem, the Old City and Salah al-Din witnessed acts of disorder, as hundreds of rioters threw stones, bottles and fireworks,” and added in a series of tweets in Arabic, “A number of policemen were slightly injured.” The forces responded with means to disperse and repel the demonstrators."

The Palestinian presidency said that the occupation forces' attack on the mourners of the martyr Walid al-Sharif and the Mujahideen cemetery in Jerusalem is "a brutal and barbaric act, and the Israeli government is the only one who bears the escalation and tension in the region following these crimes it is committing."

The Palestinian Foreign Ministry also described the occupation's attack on the funeral as terrorism, reflecting Israel's response to international demands to investigate its crimes.

The National Liberation Movement (Fatah) said that the occupation forces’ attack on the funeral of the martyr Walid al-Sharif and before him on the funeral of Shireen Abu Aqleh “is an embodiment of its fascist behaviour.” The Islamic Resistance Movement (Hamas) described the occupation’s attack on mourners as “Zionist terrorism that will be met with more steadfastness.” and open confrontation.

The Democratic Front for the Liberation of Palestine considered that the aggression of the occupation forces on the mourners of the funeral of the martyr al-Maqdisi confirms "the fascism of the occupying state and its legal, security and political system, and its disregard for public opinion and international law."

The Jordanian Ministry of Foreign Affairs also condemned, on its Twitter page, the attack on the mourners of the body of the martyr Walid al-Sharif.

She added that Israel must respect its obligations under international humanitarian law as the occupying power in East Jerusalem.