Haaretz conveys the latest Israeli account of the assassination of Shirin Abu Akleh.. Calls for a transparent investigation and the authority renews its refusal to hand over evidence to the occupation

Haaretz newspaper reported the latest account of the occupation regarding the assassination of Shirin Abu Aqleh last Wednesday in the Jenin camp, while the authority renewed its refusal to participate in any investigation by Israel in this regard, amid solidarity stands and calls for an investigation. 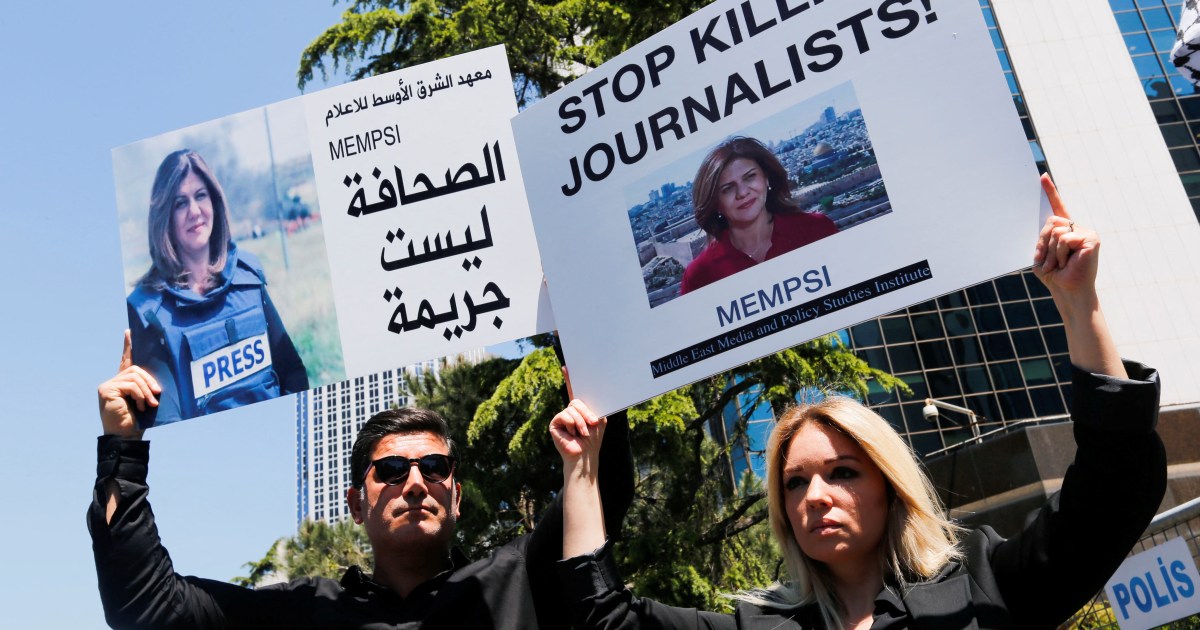 Haaretz newspaper reported the latest account of the occupation regarding the assassination of our colleague Shireen Abu Aqleh last Wednesday in the Jenin camp, while the authority renewed its refusal to participate in any investigation by Israel in this regard, amid solidarity stands and calls for an investigation.

The newspaper quoted an Israeli official as saying that an Israeli soldier fired about 190 meters from the whereabouts of Al-Jazeera correspondent Shireen Abu Aqila in Jenin, and he may have hit her.

The Israeli newspaper added that the soldier accused of assassinating Shirin said during his interrogation that he had not seen her and did not know that he had shot her;

Noting that the soldier was sitting in a jeep, armed with a rifle equipped with a telescopic lens.

It is noteworthy that the occupation recounted more than one story over the past few days, where it began by accusing Palestinian resistance fighters, before declaring that the source of the fire could not be determined, the last of which was what was reported yesterday in Haaretz newspaper.

Palestinian rejection of the joint investigation

The Palestinian Prime Minister added that Shireen Abu Aqleh was a model for the Palestinian woman who performed her mission with high professionalism.

The US Secretary of State, Anthony Blinken, renewed his condolences for the loss of Shireen Abu Akleh;

He said he appreciated the journalistic work she had done in her life.

Blinken also confirmed that Washington supports the investigation into her murder, and announced that he had spoken directly with her brother.

For her part, Member of the US House of Representatives, Mary Newman, said - in a previous interview with Al Jazeera - that work must be done to find the truth about the killing of Shireen Abu Akleh.

She stressed that she would demand the US administration to press for an investigation as soon as possible.

For his part, Senator Gilbert Roger, Vice-Chairman of the Foreign Affairs, Defense and Armed Forces Committee in the French Senate, said that his country should do more than just condemn the assassination of journalist Sherine Abu Akleh, and Roger considered in an interview with Al Jazeera that justice can only be achieved through an investigation. independent international.

In an interview with Al Jazeera, Irish Parliamentarian Richard Boyd Barrett described Israel's attack on the funeral of the late Shireen Abu Akleh as barbaric and shocking, and revealed to the peoples of the world that it is a rogue terrorist state.

As part of the solidarity vigils, the Algerian newspaper Al Hiwar held a memorial council yesterday for the late colleague Sherine Abu Akleh.

Media activists, political activists, and organizations officials described the martyr, Sherine Abu Aqleh, as the fighter who preferred to defend the Palestinian cause more than anything else.

Journalists from the Union of Television Journalists in Chirbon, West Java, Indonesia, organized a vigil in which they expressed their grief and anger over the assassination of Shirin.

The Indonesian Muslim Journalists Forum and Union issued a statement condemning the assassination of the colleague, as they considered the killing of journalists by the Israeli occupation part of an "organised policy", and demanded that the case of the colleague, Shirin Abu Aqila, be brought to international courts.

Activists from Arab, Islamic and American Jewish organizations participated in a mass demonstration in Chicago to condemn the assassination of Shireen Abu Akleh.

The organizers said that the demonstration was one of several demonstrations that took place on the same day in more than 20 American cities, including California and Detroit, denouncing Israel's crimes against the Palestinian people and demanding that the killers of Al-Jazeera reporter Shireen Abu Aqila be brought to justice.

In New York, a demonstration took place in Brooklyn in commemoration of the 74th anniversary of the Palestinian Nakba, organized by activists and youth groups pro-Palestine.

At the beginning of the demonstration, activists organized a stand in solidarity in honor of the spirit of colleague Sherine Abu Akleh. The participants denounced the assassination of Sherine and chanted slogans calling for justice for her. The demonstrators carried pictures of Sherine and called for awareness of what happened to her.

In the American capital, Washington, activists and sympathizers with the Palestinian cause gathered in front of the Abraham Lincoln Memorial, in commemoration of the Nakba Day and in honor of Al-Jazeera reporter Shireen Abu Akleh. The activists demanded justice for her assassination and to hold Israel accountable.