Close-up | "We must have our own big plane"

The domestic large aircraft carries the Chinese dream of several generations. At this moment, the dream ushered in the echo of a new era.   On May 23, 2014, during his inspection tour in Shanghai, General Secretary Xi Jinping made a special trip to COMAC Design and R&D Center, boarded the C919 large passenger aircraft to display the prototype, sat in the main driver's seat in the cockpit, and l 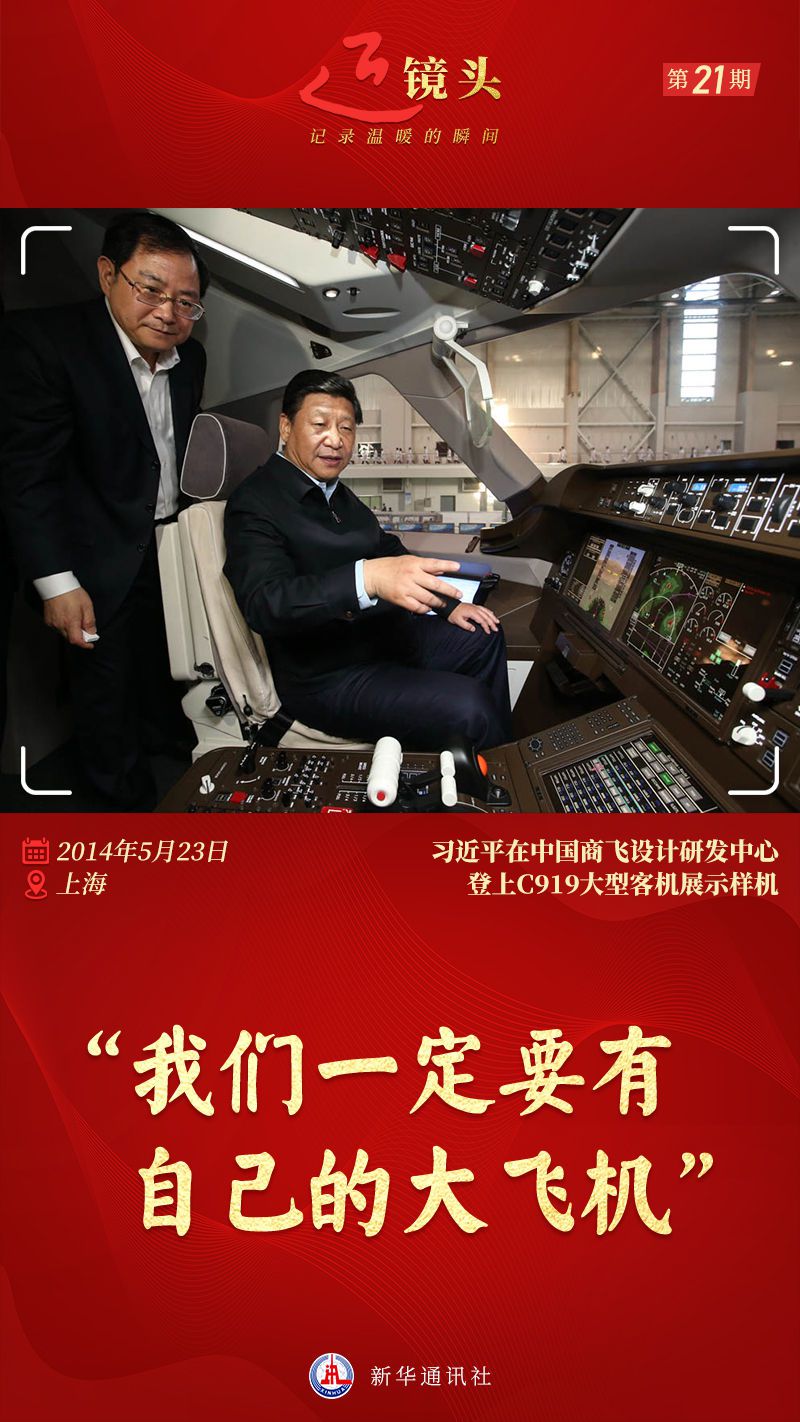 At this moment, the dream ushered in the echo of a new era.

On May 23, 2014, during his inspection tour in Shanghai, General Secretary Xi Jinping made a special trip to COMAC Design and R&D Center, boarded the C919 large passenger aircraft to display the prototype, sat in the main driver's seat in the cockpit, and learned about the speedometer, altimeter, Track map and other related instruments and meters.

"If we want to be a strong country, we must develop equipment manufacturing and large aircraft, so as to play a leading and iconic role." General Secretary Xi Jinping's words were firm and powerful.

In the hall, people came to hear the news.

Hu Shuangqian, who was the head of the fitter team in the CNC machining workshop at that time, still remembered the scene at that time: "The general secretary shook hands with the designers, workers and test pilots in the front row of us. memorable."

What moved Hu Shuangqian and his colleagues was that General Secretary Xi Jinping watched carefully and asked carefully at the scene.

In the cockpit, he learned more about the design.

Twice he sat down in his seat to feel the sensation as he walked through the cabin of the plane.

"I deeply realize how much the country attaches great importance to the large aircraft project." Hu Shuangqian was deeply excited, "We must strive to make the self-developed large passenger aircraft fly freely in the blue sky as soon as possible."

As a large jet passenger aircraft independently developed by my country, the C919 can carry more than 150 passengers and has a range of up to 5,500 kilometers.

In China, 22 provinces, more than 200 enterprises, 36 universities, and hundreds of thousands of industrial personnel participated in the development.

Condensed on this plane is not only the Chinese wisdom of breakthrough innovation, but also the national will to persevere in the dream.

On many occasions, General Secretary Xi Jinping has repeatedly emphasized the insistence on self-reliance and self-improvement in science and technology.

He repeatedly pointed out that the key core technologies "can't be bought, bought or negotiated".

From "Tianwen No. 1" visiting Mars, to "Striver" diving deep into the Mariana Trench; from "Beidou" networking, "Fuxing" flying, to the rapid development of new coronavirus detection reagents and high-level vaccines... One This "Chinese mark" is engraved on the journey to the peak of science and technology, and it has lived up to the ardent expectations of General Secretary Xi Jinping.

An era has its responsibility.

"China's aircraft manufacturing industry has gone through a difficult, bumpy and tortuous journey. Now it is starting from scratch, with a good momentum and a good start..."

General Secretary Xi Jinping's high hopes and deep concern for the domestically produced large aircraft made the staff present both pleasantly surprised and excited, but also deeply burdened by the heavy responsibility on their shoulders.

Li Dongsheng, then vice president of COMAC Shanghai Aircraft Design and Research Institute, recalled: "Every word of the general secretary resonated greatly in our hearts, and everyone responded with rounds of warm applause."

When the general secretary stepped out of the comprehensive test hall, many young people followed spontaneously and were reluctant to leave.

"I have high hopes for you. China's large aircraft industry has taken another step in the Long March. We must have our own large aircraft!" The scene broke out into thunderous applause, and many elderly researchers burst into tears.

The third year after this inspection, on May 5, 2017, the C919 soared into the blue sky and successfully made its maiden flight.

The road of China's large aircraft is stable and far-reaching!