"Threat to national security": why the US blocked the accelerated adoption of a new aid package to Ukraine

Senator Rand Paul blocked an accelerated vote on the allocation of another tranche of almost $40 billion in aid to Kyiv, including for arms supplies. According to him, the provision of such a volume of funds threatens the national security of the United States itself and is "an outright slap in the face to millions of taxpayers." As Paul noted, the United States cannot save Ukraine by dooming its own economy. However, the White House urged senators to immediately adopt this document. Experts, in turn, note that Washington is acting to please its geopolitical ambitions, ignoring internal problems, primarily economic ones. At the same time, a significant part of American money is being misused by Kyiv due to rampant corruption, analysts say. 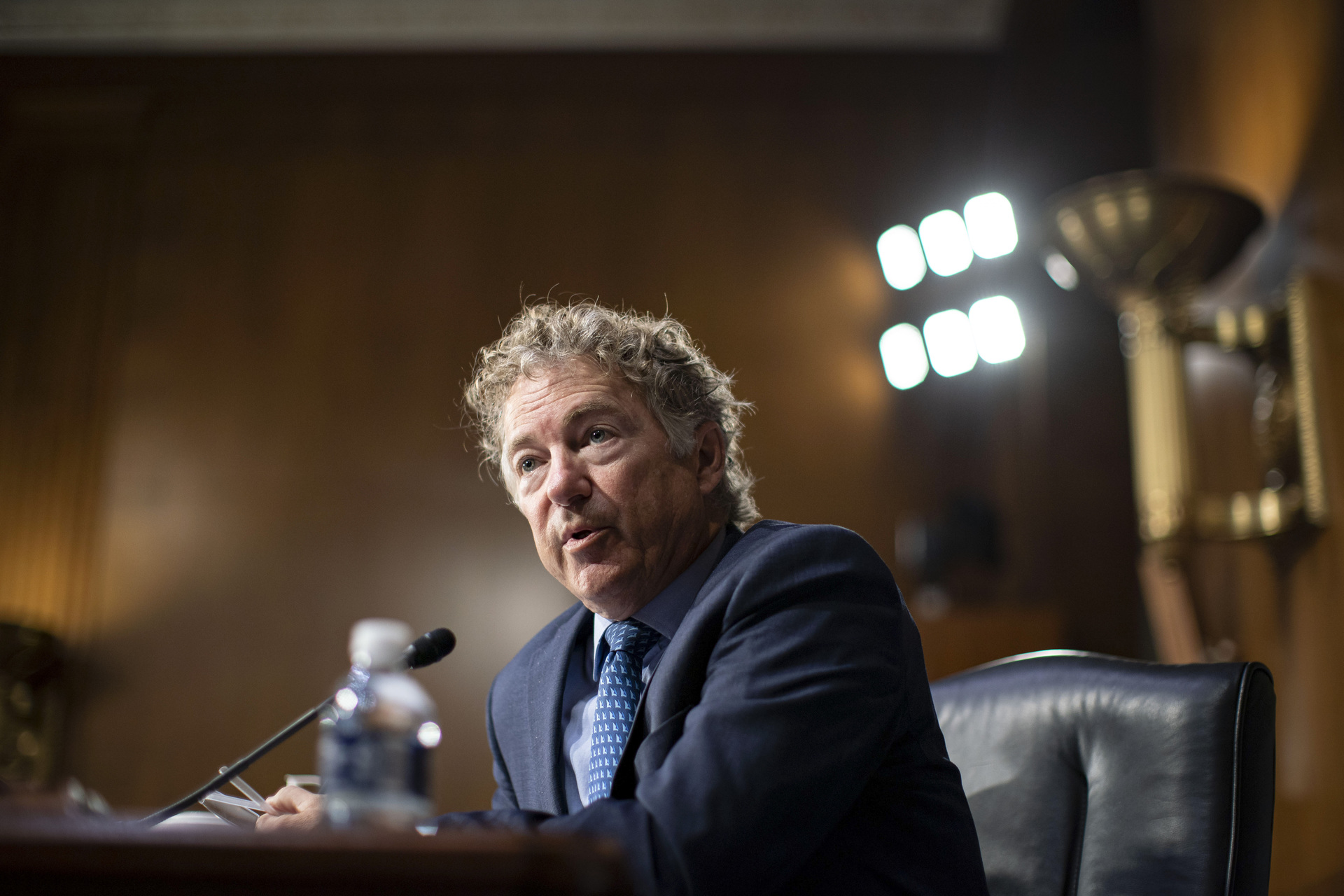 The US Senate blocked a vote in an accelerated format on the allocation of almost $ 40 billion in assistance to Kyiv, including for the supply of weapons.

As the initiator of the ban, Republican Senator Rand Paul, said, such a volume of assistance threatens the national security of the United States.

“This is a threat to our national security and a blatant slap in the face to the millions of taxpayers who cannot afford to buy gasoline, food or find infant formula,” Paul tweeted.

According to him, the adoption of a bill providing for assistance to Kyiv will increase the total amount of appropriations to the Ukrainian side in two months to almost $54 billion.

"We can't keep spending money we don't have," the US senator said.

Paul pointed out that the spending bill that Congress is "again trying to get through" "doesn't involve any oversight of how money is spent."

Earlier, during a meeting of the Senate, the politician said that the United States cannot save Ukraine, dooming its own economy to death.

“If this bill is passed, the US-approved spending on Ukraine will be approximately $60 billion,” the legislator noted.

“And it’s not like we have that money somewhere.

We will have to borrow them from China to send them to Ukraine.”

Paul recalled that the volume of the new aid package for Kyiv exceeds US spending in the first year of the conflict in Afghanistan.

“In addition, this proposal prevails over domestic priorities.

Next to the huge $60 billion in aid to Ukraine, the $6 million that we annually spend on cancer research looks insignificant.

$60 billion is more than the annual amount of taxes on gasoline that the state collects for the construction of roads and bridges, ”the senator explained.

He believes that the money allocated to Ukraine could largely or completely finance the most important US government agencies.

And Congress wants to keep spending and spending,” the legislator said.

Paul's criticism was responded to by White House press secretary Jen Psaki during a briefing.

According to her, Washington agrees that overseeing the spending of funds intended for Ukraine is “extremely important,” but the bill, as Psaki noted, already allegedly includes resources provided for these purposes.

We call on all senators to pass the bill in its current form without delay.

In our opinion, what is in it is enough, ”Psaki emphasized.

Another package for Kyiv

Recall that this week the US House of Representatives approved a bill on auxiliary appropriations for Ukraine in the amount of almost $40 billion intended for military, economic and humanitarian support for Kyiv.

As a White House press secretary clarified during a briefing on May 10, the resources provided by the bill will make it possible for the United States to send more weapons to Ukraine.

In particular, we are talking about artillery, armored vehicles and ammunition.

Psaki also noted that the innovations will help Washington "replenish its own supplies and support US troops on NATO territory."

The decision to provide a new portion of assistance to the Kyiv regime was commented in Moscow.

According to Dmitry Medvedev, deputy chairman of the Russian Security Council, the so-called assistance on such an unprecedented scale is explained by the desire to continue the “proxy war against Russia”.

He also noted that there will be many hunters to share the $40 billion that Congress plans to send to Ukraine, including "banal thieves on both sides of the ocean."

In addition, "the Americans should thank their Russophobic authorities" for the "crazy prices" for gasoline and groceries, Medvedev said.

Experts, in turn, believe that Senator Paul's criticism of the White House is primarily dictated by real domestic economic problems in the United States, to which the Biden administration closes its eyes for the sake of its own geopolitical ambitions.

“The main threats here are inflation and food shortages.

In addition, it is not in vain that the senator demands to control the spending of money allocated to Kyiv.

The fact is that in Ukraine they are simply stolen and misused due to rampant corruption, ”said Yury Rogulev, director of the Franklin Roosevelt Foundation for the Study of the United States at Moscow State University, in a conversation with RT.

In addition, taking into account internal problems, American society reacts ambiguously to the decisions of the White House to allocate tens of billions of dollars to the Kyiv regime, the analyst says.

“For many residents of the United States, the task of the White House under the patronage of the current Ukrainian government is definitely irrelevant.

And therefore, measures to allocate a new aid package to Kyiv, and even in such a volume, are unlikely to receive unanimous approval in society.

Many Americans don’t even know where Ukraine is,” the expert said.

At the same time, the Ukrainian issue is a convenient cover for President Joe Biden, who is easier to blame for accelerating inflation on Russia than to deal with domestic problems, Rogulyov said.

“The head of the White House fails to find an effective way out of this situation.

Therefore, he focuses on the Ukrainian problem, blaming Russia for all the troubles of the United States, unfairly calling inflation and the US deficit Putin's.

This is just shifting problems from a sick head to a healthy one, ”the analyst is sure.

According to him, questions are increasingly arising in the US political establishment regarding how the money of American taxpayers "flies irrevocably into the bottomless barrel of Kyiv because of Biden's ambitions."

“The same issue was raised by the Republican Paul in a series of his tweets and during the Senate meeting.

Most of his arguments can be called sound and reasonable.

No one in the US really knows exactly where the money allocated to Kyiv goes and how it is being used.

Corruption is rampant in Ukraine.

The Americans themselves admit that money goes there like a black hole, ”Dudakov said in an interview with RT.

He believes that by blocking the accelerated voting procedure for the allocation of $ 40 billion in aid to Kyiv, the American legislator "took a serious step."

“Now a colossal stream of criticism will pour in his direction.

But the longer the United States continues to pour arms and money into Ukraine without seeing much result, the more questions will arise about the advisability of further allocation of funds.

And even those American lawmakers who now disagree with Paul are likely to change their minds.

Time is not working in favor of the White House, ”Dudakov argues.

He calls the $40 billion a whopping sum, as it is larger than many social programs in the United States.

“Of course, the criticism that they want to send such money to the needs of Ukraine, when the United States itself is slipping into recession, looks justified and coincides with the opinion of a large part of the American population,” the analyst says.

Nevertheless, he practically has no doubt that the resonant bill will eventually be adopted by the Senate, however, already according to the usual procedure.

“This is a little longer than in the accelerated format, but we are still talking about a matter of days,” Dudakov concluded.