Miami and Phoenix foresee the conference finals: guided by Jimmy Butler, the Heat took out the barbed wire against Joel Embiid to largely beat (120-85) Philadelphia, and the Suns found… 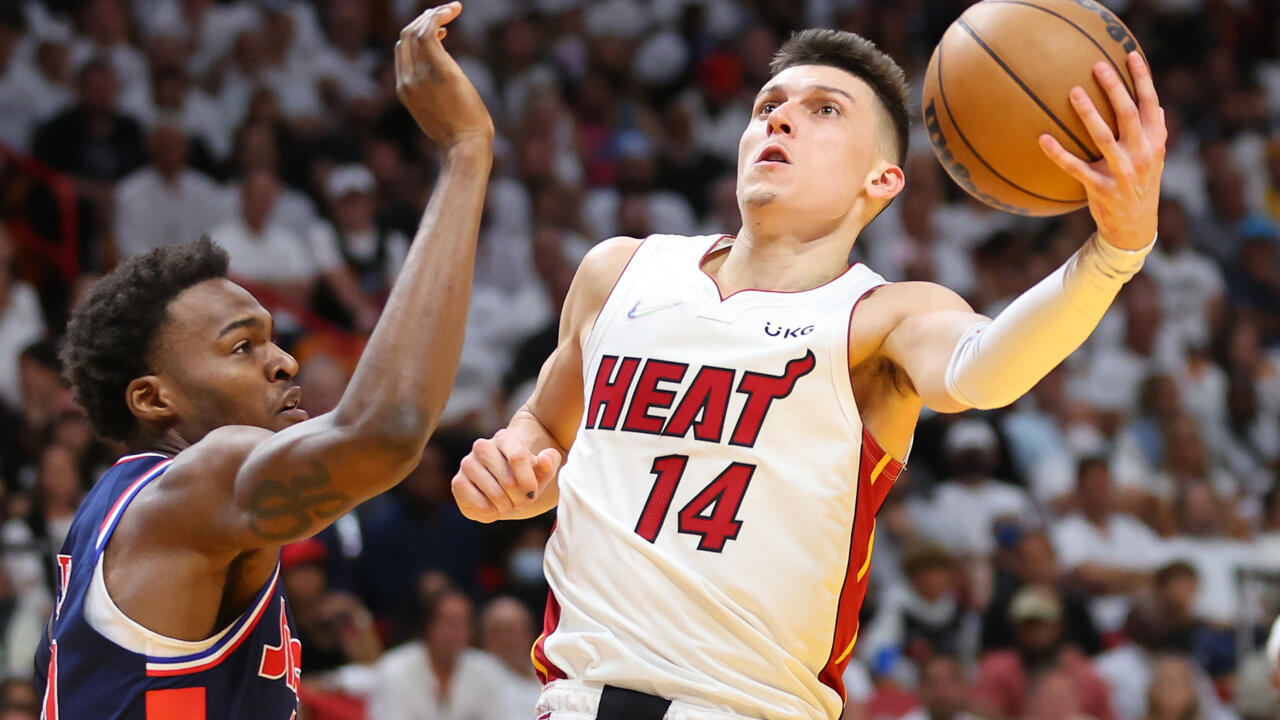 The Florida team, championship finalists in 2020, have regained their usual virtues - constant combativeness, relentless defense -, somewhat etiolated during the two previous confrontations in Pennsylvania, to regain the 3-2 advantage in this series where each team imposed itself on its floor.

Embiid paid the price, taking the ball in the face in the 2nd quarter.

However, the Cameroonian pivot, already bothered by a ligament tear in the right thumb, has been playing with a protective mask, since his orbital fracture of the right eye which occurred two weeks ago.

Miami Heat center Joel Embiid plays with a protective mask against the Philadelphia 76ers in Game 5 of the Eastern Conference Semifinals on May 10, 2022 in Miami Michael Reaves GETTY IMAGES NORTH AMERICA/AFP

This ball, more exactly pressed on his face by Dewayne Dedmon, made him collapse and cry out in pain.

Embiid nevertheless found the strength to get up, but, as if playing with the handbrake, he could not really impose himself in the racket of Miami where he was obviously persona non grata.

"A lot of disappointment"

After his performance on Sunday (31 pts including 16 in the last quarter) worthy of the triple best scorer in the league that he was, "The Beard" (the bearded man) was thus unable to confirm his start, which nevertheless also conditions the fate of the 76ers.

The deterrent force of the Heat was as expected made greater, like Bam Adebayo who multiplied his efforts inside (12 pts, 6 rebounds, 2 blocks), but still it was necessary that the baskets also come in.

And not just those of Jimmy Butler.

"We did what we were supposed to do, win at home. We have to keep playing basketball the right way. If we focus on defense, we will win," Butler advocated, recalling the DNA of the Heat.

"They were so much weaker, tougher, more physical. Everything they did, their energy, their tenacity, was better. I haven't often said that about us, but there's a lot of disappointment," for his part lamented the coach of the Sixers, Doc Rivers, promising nevertheless "to be ready to respond" Thursday.

So still too alone

Back to the wall, the Sixers will indeed imperatively win at home, to snatch a decisive match 7 scheduled for Saturday.

Otherwise it will be vacation time and Miami will prepare for the next game, against Milwaukee or Boston (2-2).

In the West, Phoenix also regained the 3-2 advantage over Dallas, reviving its basketball efficiency, in the wake of Devin Booker (28 pts at 11/20 on shots) and DeAndre Ayton (20 pts, at 9/13, 9 rbds) dominating in the paint.

After a first quarter to the advantage of the Mavs, the Suns accelerated the pace, especially in the 3rd, won 33-14, without ever showing any relaxation.

So much so that two days after completely going through his N.4 match, Chris Paul didn't really have to pull out all the stops in the money-time he cherishes so much and therefore to catch up.

His 7 points and 10 assists served as the minimum rate.

Between them, they have concentrated almost two-thirds of their team's pawns.

Dallas will also have to respond collectively on Thursday.

Otherwise Phoenix will return to the final in the West, probably against Golden State, in a favorable position (3-1) against Memphis, deprived of Ja Morant.