The Tunisian General Labor Union criticizes the dialogue called for by President Said, describing it as a "sham" dialogue

The Secretary-General of the Tunisian Labor Union, Noureddine Taboubi, confirms the rejection of what he described as the fictitious dialogue, and says that the union will not be a partner in a dialogue with pre-existing results, and that President Said bears responsibility for his choices. 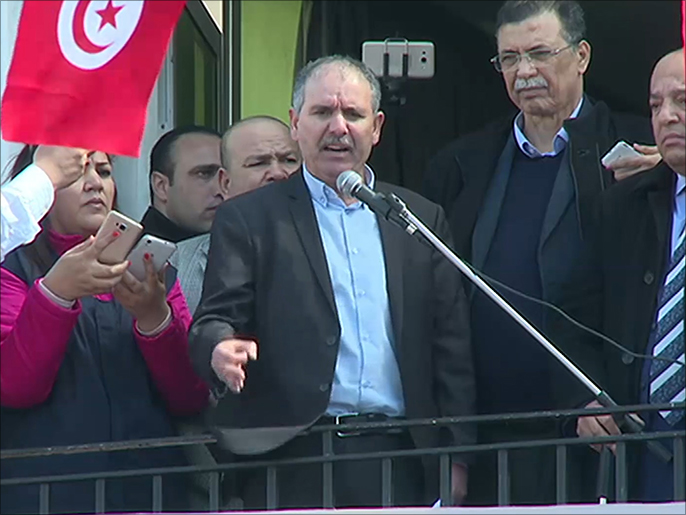 The Secretary-General of the Tunisian General Labor Union, Noureddine Tabboubi, confirmed that the union will not accept what he described as a mock dialogue, and will not be a partner in a dialogue that precedes the outcomes.

During the opening of the meeting of African union leaders in Tunis, Taboubi said that President Kais Saied is elected by the people, and is free to appoint members of the electoral commission, and that he will bear responsibility for his choices.

This is not the first time that al-Taboubi has criticized the decisions and choices of President Saeed, including the issue of political dialogue. Last Saturday, al-Taboubi had said that consensus on major national options could not be "imposed by force or by acknowledgment of a fait accompli."

President Saeed had called for a dialogue that excludes "traitors", as he put it, and the critics demanded a "real" dialogue without prior decisions, and the General Labor Union announced - in a statement last Friday - its rejection of any "conditional formality dialogue that marginalizes the national political and social forces." actors," and demanded that the dialogue be "real, direct and broad, with no predetermined decisions and no endorsement of conclusions prepared for it in advance."

Saeed, who took control of the executive authority last July and dissolved parliament later this year, had issued many exceptional decisions without regard to any constitutional or legal rules, according to his opponents, and the appointment of members of the Independent Electoral Commission was the last decision issued by Saeed from order to establish what he described as a "new republic".

In a separate context, Tunisian President Kais Saied called on the security forces to confront the monopolists, especially those who speculate with animal feed.

After his meeting with Interior Minister Tawfiq Sharaf El-Din, Saeed accused the monopolists of inflaming the situation and igniting the fire of sedition, motivated by the illusion of benefiting from the situation, according to what was stated in the presidency statement.

A number of farmers in different Tunisian governorates carried out protest movements, rejecting the sudden increase in animal feed prices, and demanding the need to review it.

Tunisia is witnessing an economic deterioration, and 18.4% of the population is unemployed, 42% of whom are young. This is accompanied by a collapse in total investment and savings rates in 2021 with an inflation rate of 7.2% last March, at a time when foreign direct investment relapsed, as Growth will be only 2.6%, according to the Central Bank, all of which was accompanied by a political crisis following Saeed's takeover of the reins of government in the country and the dissolution of parliament and independent bodies.