The next eye of the storm! The "big fish" of the Azov steel plant is about to come out of the water?

China News Service, May 10 (Reporter Meng Xiangjun) As both Russia and Ukraine confirmed the completion of the civilian evacuation operation, the Azov Steel Plant in Mariupol, a major Ukrainian industrial town that is shaped like a labyrinth and is easy to defend and difficult to attack, is about to usher in an important turning point. ——Either it was captured by the Russian army, or the Ukraini 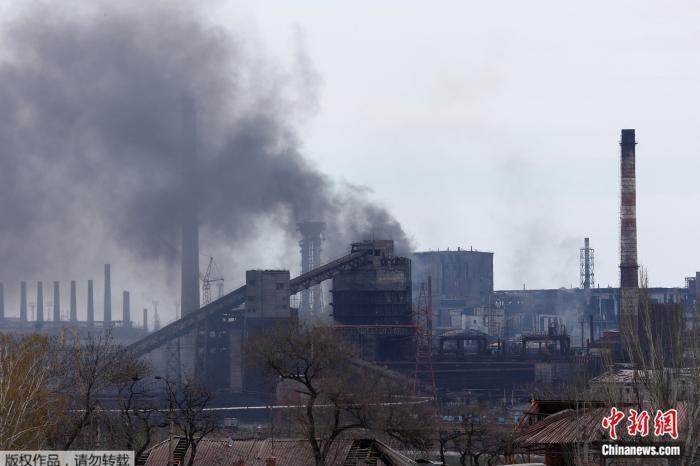 China News Service, May 10 (Reporter Meng Xiangjun) As both Russia and Ukraine confirmed the completion of the civilian evacuation operation, the Azov Steel Plant in Mariupol, a major Ukrainian industrial town that is shaped like a labyrinth and is easy to defend and difficult to attack, is about to usher in an important turning point. ——Either it was captured by the Russian army, or the Ukrainian defenders were successfully evacuated.

Either way, the next eye of the storm for the situation in Russia and Ukraine is emerging.

With the "secret visits" of Western dignitaries, increasing military aid, and stalled negotiations, will Mariupol's last point of resistance emerge along with the rumored "big fish" to reveal the mystery of his ultimate fate?

[Civilians withdrew, but the defenders did not withdraw]

After ten weeks of intense offensive and defensive battles, the Azov steel plant is in ruins.

The Ukrainian side previously stated that "women, children and the elderly have almost no food, water or medicine" and "wounded soldiers are dying of gangrene and sepsis."

Since the 5th local time, the armed forces of Russia and Donetsk have unilaterally stopped all combat operations in order to open humanitarian channels.

On the 7th, the head of the Russian National Defense Command Center, Mizhantsev, pointed out: This was an evacuation operation involving the United Nations and the International Committee of the Red Cross; Russia evacuated 51 civilians, including 22 women and 11, from the Azov steel plant complex. children.

Ukrainian President Zelensky said in his late-night speech that Uzbekistan has rescued more than 300 civilians from the factory; prepared for the second phase of the evacuation of the wounded and medical personnel; promised to continue "extremely difficult but essential diplomacy" Efforts", calling on Médecins Sans Frontières and others to rescue the remaining fighters.

The United Nations confirmed that more than 500 civilians were evacuated from the Azov steel plant.

After the civilians were evacuated, there may be more than 1,000 Ukrainian fighters left in the steel factory.

All in all, for the sake of the United Nations, the civilians withdrew and the defenders stayed.

The issues that are most concerned by the outside world now may be:

1. This group of defenders in the steel plant is so important because there are "big fish" trapped?

2. Next, will the "final battle" break out at the steel plant, or will it end with the smooth withdrawal of the defenders?

3. What is Russia going to do?

In the end when to launch a general attack or make a decision?

Data map: The scene after the Ukrainian army exchanged fire with the Russian raid team in Kyiv.

Earlier, the Ukrainian military command said that with the support of tanks and artillery, the Russian army again tried to attack the steel factory on the 7th to drive out the last Ukrainian defenders.

Arestovich, an adviser to Zelensky, pointed out that the Russian army may want to eliminate the Ukrainian defenders in the steel plant before the Victory Day military parade on the 9th as a "gift" to Putin.

However, this didn't happen.

The West also believed that Putin would declare a "war" against Ukraine or issue a "doomsday warning" in his speech at the military parade, which Putin did not do either.

As to who the "big fish" trapped there is, doubts remain.

Rumour has it that Canadian Lieutenant General Trevor Cadieu was caught trying to break out and was in charge of Biolab No. 1 in Ukraine, where 18 people specialize in research on deadly viruses.

The foundation of the younger son of US President Biden is accused of funding the biological laboratory in Ukraine.

This is the most important news about the "big fish" so far.

On April 21, the Ottawa Citizen reported that a source from the Canadian Ministry of Defense confirmed that Cadieu had retired on April 5 and had gone to Ukraine to provide "volunteer services". One concern was the investigation of his alleged sexual misconduct.

The Canadian side tried to distance themselves from the relationship, saying that after retiring, he was an ordinary citizen, and everything was a "personal act", and the military did not provide any help.

At present, it is impossible to confirm that Cadieu was captured by the Russian side at the Azov Steel Plant and brought to Moscow for trial, and the other information mentioned above cannot be verified.

[There have been many rounds of changing prisoners, but it has not yet come]

The situation is complicated and confusing. Analysts believe that Putin announced the victory of the attack on Mariupol, vigorously rewarded the Russian soldiers, and suddenly turned the onslaught into a siege, and repeatedly proposed to let the Ukrainian army "raise the white flag" to surrender. These signs are all related to the Russian army. It is consistent with the intention to "catch the big fish alive".

Ukraine intends to exchange all Russian prisoners of war for the Ukrainian defenders of Mariupol, which highlights the "special value" of these people.

Zelensky stated that if the Russian army "takes the life of the Ukrainian army" in the steel plant, Kyiv will not have further talks with Moscow.

On February 24, local time, in Mariupol, Ukraine, a military installation near the airport caught fire.

In fact, since late March, incomplete statistics show that Russia and Ukraine have conducted at least four rounds of small-scale prisoner exchanges:

On March 21, Russia and Ukraine conducted the first prisoner-of-war exchange operation. Ukraine exchanged 9 Russian prisoners of war for the mayor of Melitopol who was detained by Russia; Yi was also released and awarded a medal.

On April 9, the Russian side exchanged prisoners again, and 12 Ukrainian soldiers, including a female officer, returned to China; 14 Ukrainian civilians were released; 32 Russian drivers and 20 detained Ukrainian drivers were detained in Ukraine. Driver exchange.

On April 30, the Russian side carried out a new round of prisoner exchange. The Ukrainian side "homed" 14 people, 7 soldiers and 7 civilians.

These batches of prisoner swaps have nothing to do with the Azov Steel Plant.

It is not difficult to see that Putin has decided to "groom" these people and maximize the use of the situation in the steel plant to increase the bargaining chips, and there should be further strategic intentions.

After the Russia-Ukraine conflict, more than 20 Western and international dignitaries have visited Ukraine to "check in".

Jill Biden "secretly visited" Uzhhorod, the western city of Uzbekistan on Mother's Day on the 8th, and met with President's wife Zelenskaya and held closed-door talks.

Gill believes that it is important to show that "the American people stand with the Ukrainian people."

Data map: US President Biden and his wife Jill.

It happened that Jill appeared in Ukraine with Canadian Prime Minister Justin Trudeau.

He planned to secretly visit Irpin, a suburb of Kyiv, but local officials and the media leaked the news.

In a joint press conference with Zelensky, Trudeau said: Canada will provide Ukraine with drone cameras, satellite imagery, small arms, ammunition; provide funding for mine clearance projects; sanction 45 countries with the Kremlin and Russia Individuals and entities with close ties to the defense sector.

Zelensky called Trudeau a "good friend" of Ukraine. He pointed out: Canada can exert influence to persuade other NATO members to provide Ukraine with more advanced weapons; support Ukraine's new version of the "Marshall Plan" to help it Rapid post-crisis recovery; faster integration of Ukraine with the EU.

The meaning of the above two "secret visits" should be combined with the situation:

First, the actions of the United States and Canada are highly coordinated.

On the 7th local time, according to the White House, Biden and Trudeau discussed sanctions against Russia and aid to Ukraine on the phone.

Biden "highly praised Canada's close cooperation in the crisis and its leadership in comprehensive sanctions against Russia."

The next day, both Biden's wife and Trudeau himself "coincidentally" visited Ukraine, one to express emotional support and the other to provide military assistance.

The "Washington Post" commented that it is a rare move for the spouse of the current president of the United States to enter an "active war zone".

The United States and Canada also announced at about the same time that their diplomats would return to Kyiv to show that the Russian army "failed to occupy the Ukrainian capital."

On May 8, local time, Canadian Prime Minister Justin Trudeau and Ukrainian President Zelensky attended a press conference after their meeting in Kyiv.

Second, the "influx of dignitaries" from many countries can only show that the West is getting more and more involved in the conflict.

Shhagoshev, a member of the Security and Anti-Corruption Committee of the Russian State Duma, previously revealed that the people trapped in the Azov Steel Plant include intelligence personnel from the United States, Britain and other countries, senior NATO generals and mercenaries.

The visit of Western dignitaries is not only to show the unity of allies and to cheer up the Ukrainian army, but maybe they are also nervous about other things, such as the "Rashomon" of the former Canadian lieutenant general?

Third, US and Western military aid continues to increase, and the rhythm cannot be stopped.

US media pointed out that the Russian-Ukrainian conflict has turned into a fierce war of attrition.

In the past two days, Biden announced another $150 million package of military assistance to Ukraine, including 25,000 155mm artillery shells, anti-artillery radar equipment and communication jammers.

Biden also pointed out that the U.S. Congress must provide funds quickly because the government is about to run out of available funds.

How many articles are there still at the expense of "emptying the family" for Ukraine's sake?

Fourth, Western heavyweights have been supporting one after another, and Zelenskiy has become more and more energetic.

On the one hand, Zelensky has raised the price for the West, demanding more and more and higher, such as those mentioned by Trudeau; on the other hand, the threshold for negotiating with Russia has also been continuously raised.

On the 6th, Zelensky said in a video speech to the Chatham Royal Institute of International Affairs, a London think tank, that the Russian army must withdraw from its position before entering Ukraine on February 24, and a peace agreement is expected to be reached. acceptable minimum".

However, analysts believe that the time point set by Zelensky is 2022, and Ukraine may not insist that Russia return Crimea, which was incorporated into Russia in 2014.

Finally, not only Westerners "fashionable", but also senior Russian officials went to Ukraine.

FILE PHOTO: Residents of the city of Mariupol, Ukraine are evacuated from the humanitarian corridor.

He met with Pushlin, the leader of the "Donetsk People's Republic", and said that in these areas liberated by the "Russian army", "peaceful life has resumed." He said that Russia will provide assistance in reconstruction, especially humanitarian aid assistance.

While the West keeps giving weapons and Ukraine keeps asking for weapons, Russia is talking about reconstruction and humanitarian assistance. This comparison is really interesting.