In the Iraqi dialect, the word “mako” means “nothing.” Issa repeats it often by saying: “There is no electricity, there is no house.” After eight years of fierce battles with the terrorist organization ISIS, the reconstruction process is still in place in his village in northern Iraq. Issa Al-Zamzoum lives in the village of “Habash” Al-Zarra 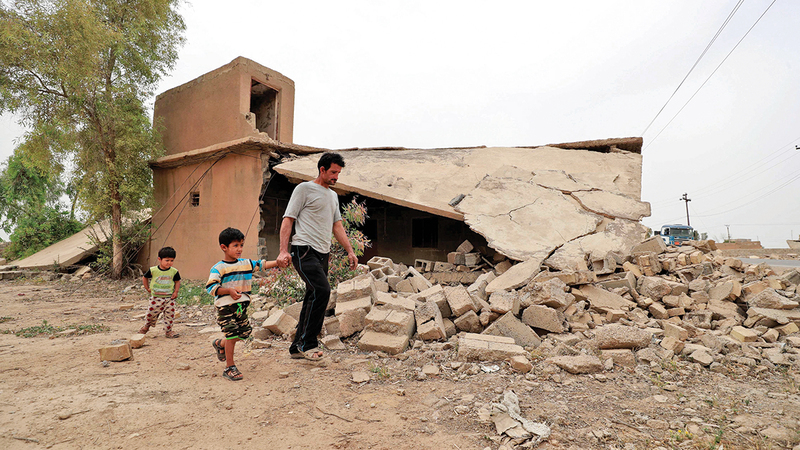 The reconstruction process is still in place

In the Iraqi dialect, the word “mako” means “nothing.”

Issa repeats it often by saying: “There is no electricity, there is no house.” After eight years of fierce battles with the terrorist organization ISIS, the reconstruction process is still stagnant in his village in northern Iraq.

Issa Al-Zamzoum lives in the agricultural village of Habash, 180 km north of the capital, Baghdad.

The man, his wife (Um Warda) and their five children live in a house that is a concrete structure, part of which collapsed during the war in 2014, but was not separated from the other parts of the building.

In one room, a hen watches her chicks, in another old sleeping mats are piled up against a wall.

Issa's main house has been destroyed, and the place he now resides in has been given to him.

"There is nothing here, no electricity, no work, nothing," says the 42-year-old. "Since the war until now, we have not seen construction or services."

A consultant in the Salah al-Din governorate, to which the village of Habash belongs, who preferred to remain anonymous, justifies the delay in the reconstruction work by the extent of the governorate’s “expansion.”

In the village of Habash, the houses were destroyed or semi-destroyed, by the dozens, as if the war had just ended.

The village is paying the heavy price for the siege imposed by ISIS in the summer of 2014 on the city of Amerli, located about 10 kilometers from the village of Habash.

At the time, extremists were controlling the city of Mosul and other lands in northern Iraq.

They advanced south and besieged Amerli.

In late August of the same year, the Iraqi army, the Popular Mobilization and the Kurdish Peshmerga forces broke the siege of Amerli, the village of Habash, and the nearby villages that the militants used as bases.

In late 2017, the Iraqi government and the Iraqi army, with the support of the international coalition, declared "victory" over the organization.

"Our life is not life"

But the story did not end with the end of the battles.

According to Human Rights Watch, after the 2014 siege and during the raids, “militias, volunteer fighters and members of the Iraqi security forces looted the property of civilians who fled the fighting during the attack on Amerli.”

"They burned the homes and shops of the Sunnis living in the villages, and they used explosives and heavy equipment, to destroy buildings owned by individuals or entire villages," she added.

Today, “humanitarian needs are enormous” in the Tuz Khurmatu district, where Habash is located, according to the Norwegian Refugee Council.

The NGO added in a statement to AFP that about "20,000 displaced people live" in the district, speaking of an "urgent" need for water and electricity.

Some also lack identification papers, according to the organization, because to obtain them, some residents face “problems in clearing their page of any security suspicions” due to suspicions of their affiliation with ISIS.

Like Issa al-Zamzoum and his neighbor Abd al-Karim Nuri, the majority of Habash's residents are Sunni Arabs.

Nouri says: “This life is not ours.

I have five sheep to make a living from.”

He added, addressing one of the region's representatives, "He said he would do the reconstruction, but he did nothing."

Nouri, however, does not talk about his sectarian affiliation, nor about sectarianism, which has become a sensitive topic in Iraq, where tens of thousands of people were killed during the sectarian conflict between 2006 and 2008.

However, four and a half years after the fall of ISIS, some Sunnis say they are still subject to harassment and discrimination.

A US State Department report published in 2021 stated that Sunni officials condemned the “forced displacement of Sunnis” by the Popular Mobilization, and the “arbitrary arrests” of members of their sect “suspected of their association with ISIS.”

Without mentioning the "ISIS" organization, the official in Salah al-Din Governorate spoke of "security concerns" also delaying the reconstruction work.

While "Habash" got rid of ISIS, the ghost of its cells is still about 15 kilometers away in the areas to the north.

Along the road leading to the village of Bir Ahmed, the Popular Mobilization Forces, an alliance of Shiite armed factions that are now affiliated with the official Iraqi forces, deployed security barriers and raised the alert level.

One of the officers said, “The situation in Bir Ahmed is out of our control and out of the army’s control.”

"If you want, go in, but I can't guarantee whether you'll come back," he says.

• While "Habash" got rid of the "ISIS" organization, the ghost of its cells is still about 15 kilometers away in the areas to the north.

• “Humanitarian needs are enormous” in the Tuz Khurmatu district, where Habash is located, according to the Norwegian Refugee Council.

There are about 20,000 displaced people living in the district, who are in dire need of water and electricity.