“We didn’t know what to do, for joy”: WWII veterans shared their memories of the Great Patriotic War and Victory

The stories told by the direct participants in the events are always of great value. Especially when it comes to the Great Patriotic War. Memories of veterans about the battles and the Victory - in the material RT. 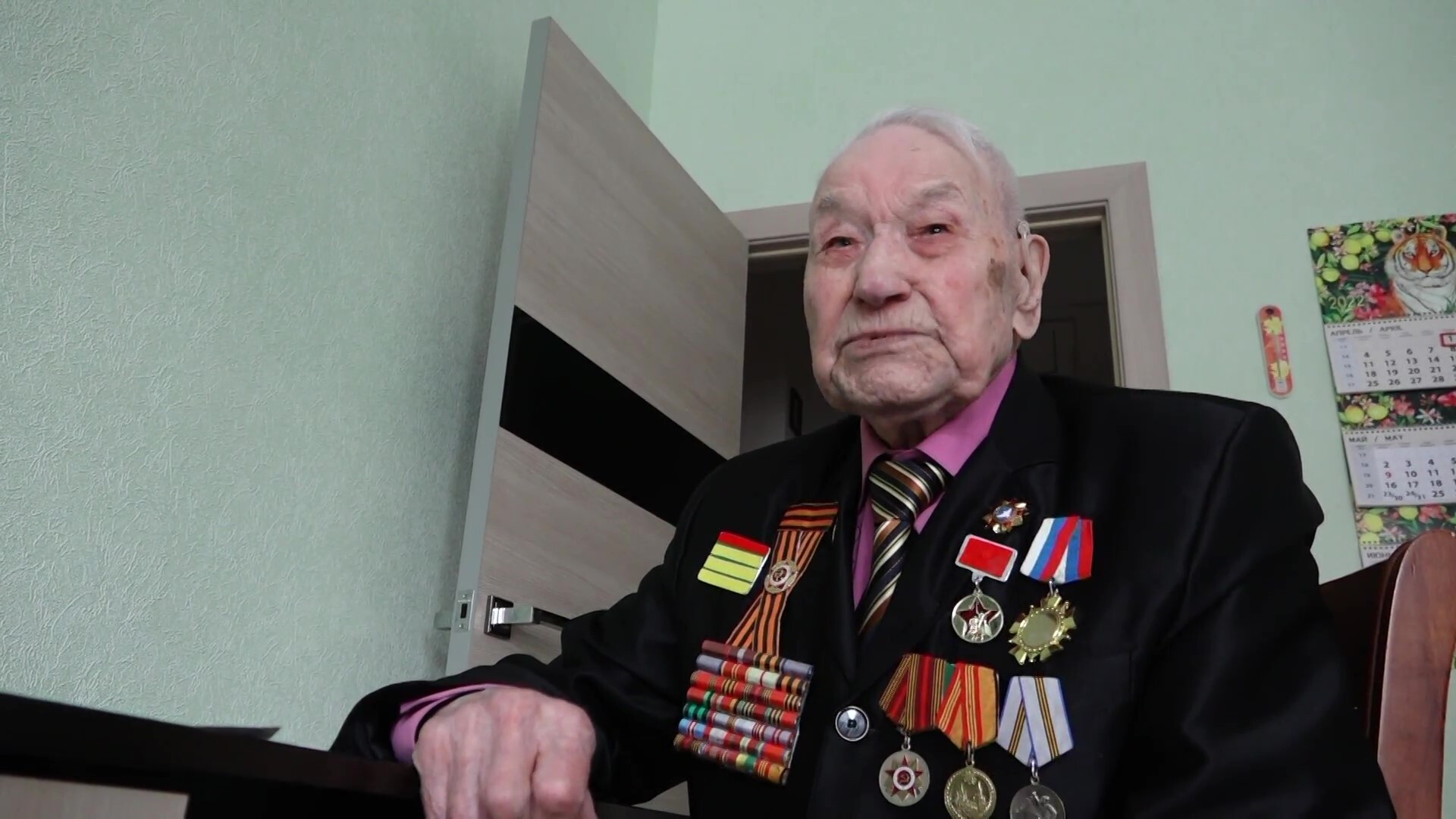 "From the bank to the front"

99-year-old resident of Yerevan Antonina Seyranova is the only Armenian veteran who has survived to this day, who participated in the Victory Parade on Red Square in Moscow on June 24, 1945.

She herself comes from the village of Vislovka in the Saransk region.

After graduating from the 10th grade, she entered the Kazan Medical Institute, but because of the war, the university was closed, and she had to return to Saransk.

There she entered accounting courses, and after graduation she began working in a bank as a deputy chief accountant.

“They took me from the bank to the front,” the woman says.

Seiranova participated in the Volkhov Front, served in the 318th Guards Mortar Regiment and caught the breakthrough of the blockade of Leningrad on January 27, 1942.

Antonina Seiranova was awarded the medal "For Courage", the Order of the Patriotic War II degree and other distinctions.

The veteran says that they write a lot about her as a participant in the Great Patriotic War, and she wants young people to learn from her experience.

“For great-grandchildren to know”

Veteran Maksim Shipitsin from the Novobessergenevsky rural settlement in the Rostov region is 103 years old.

Shipitsin, a 24-year-old man who had been married for five years, went to the front as soon as Germany declared war: "We were already members of the Komsomol, everyone began to ask for volunteers."

In the army, he became an anti-tank gunner, as well as a gun commander of the 59th Guards Artillery Regiment.

During the fighting destroyed 24 enemy tanks.

He fought in Stalingrad, Belarus and the Baltic states, participated in the liberation of the Rostov, Luhansk and Donetsk regions.

He received more than 40 government awards, as well as medals "For Courage" and the Order of the Red Star.

According to the granddaughter of the veteran Oksana Prokofieva, every May 9 is “a very big holiday” for their family.

“We hang out the Victory flag without fail, the music turns on, guests come, the table is laid, military songs are sung, grandfather tells us about the war and the Victory,” she shares.

Recently, Maxim Shipitsin has been working to make memories of the war years available not only to his family, and therefore writes memoirs.

That we had to fight in the frozen trenches for four years,” he says.

"They brought a barrel of vodka"

Sergey Agababyan, 98, from Tbilisi, also writes memoirs about his military past.

The 18-year-old guy was given only two hours to get ready.

He did not even have time to personally say goodbye to his mother, who at that time was at work in a kindergarten.

“Mom came home at five o'clock in the evening.

I came home and she was gone.

He took a piece of paper and wrote: “Dear mother!

It so happened that I went into the army.

Where I will be - I will write, and we will correspond.

And he left, ”recalls the veteran.

Sergei trained as a radio operator in four months, after which he was assigned to the 540th Airborne Regiment.

Aghababyan's brigade was sent to Stalingrad.

“It was just there that the Germans were surrounded and sought to get out of the encirclement somewhere.

And our brigade was sent there.

The Germans launched new tanks, "Tigers" and "Ferdinands" - these are self-propelled guns.

"Ferdinands" let us in.

They went in, took the first defense, the second, but failed the third.

And the third our tankers went against them.

There was a big battle in this place,” he says.

In one of the battles, the young man was wounded and spent several months in the hospital.

The second time he was wounded when he freed Oryol during the Battle of Kursk.

He received the news of the long-awaited victory while in the reserve regiment: “We were considered [in the status] “to send them to the front.”

I was on duty just when it was reported that our troops had victoriously ended the war.

"Wait, they will come to congratulate."

By lunchtime, a barrel of vodka was brought, they were distributed to everyone, and this is how we celebrated the victory.

After the end of the war, Sergei Agababyan served for two more years as a signalman in a military warehouse near Leningrad, before finally returning home to his mother.

“I want to approach Putin”

The same age as Sergei Aghababyan, Petros Petrosyan, ran to the military registration and enlistment office as soon as he turned 18 years old.

The young man was sent to study at the Tbilisi Artillery School, after which (six months later) Petrosyan ended up in the ranks of Soviet intelligence officers.

Petros entered his first battle in 1943 near Prokhorovka, where he received his first wound.

After recovery, he returned to the Ukrainian front as a battery commander.

During the battle in the village of Alekseevka, Petrosyan was instructed to place an artillery battery in the area of ​​\u200b\u200bthe settlement: the regiment's chief of staff informed him that the village had already been liberated by Soviet troops.

However, the chief was mistaken, and a group of scouts was surrounded.

“We approached, and they [German soldiers] closed us, stood in all-round defense.

And from there they shout: "Russians, come to us, we will give you white bread."

I called our guys, platoon commanders: “What are we going to do?”

We decided that we would not give up.

We will fight to the end, ”recalls the veteran.

The fierce battle lasted half a day.

When the ammunition ran out, Petrosyan decided to prepare the guns for complete destruction so that they would not fall into the hands of the enemy.

“When I already wanted to give an order to blow up our cannons, our artillery pieces, shouting “Hurrah!” Our troops approached.

At that moment, we didn’t know what to do, for joy,” he says.

After the incident, the wounded Petrosyan was summoned by the division commander and demanded an explanation why the battery commander ended up in a village surrounded by the enemy.

The scout did not betray his chief of staff and took all the blame.

You did not follow the orders of the leaders.

And he says: “What for the fact that you courageously defended yourself, fought and did not give up, you ...” And an assistant stood next to him.

He says: “We are awarding an order,” recalls Petrosyan.

After this battle, the young battery commander received the Order of the Red Star for his courage.

The award was presented in the hospital ward, where Petrosyan was treated after a serious injury.

Later, the fighter participated in the liberation of the territories of Russia, Ukraine, Romania, Bulgaria, Hungary and Czechoslovakia.

After the end of the Great Patriotic War, Petrosyan worked as a spy in the Middle East, Europe and the USA.

In 2013, the veteran was invited to Moscow to celebrate Victory Day, where he personally met with Russian President Vladimir Putin.

“Putin spoke to someone.

I approached his guards, I said: “Hello, I am such and such.

I want to approach Putin, to meet.”

[The guard] looked at me: “You can do it,” says Petrosyan.

For the past 14 years, Petros Petrosyan has been the Chairman of the Committee of War Veterans and the Armed Forces of Armenia.

The man hopes that this year he will be re-elected to the post again and he will continue to work.

93-year-old Vladimir Rapatsky, despite his age, continues to teach at the Vanadzor College of Arts named after Tavrizyan.

He lost his parents early, for some time he was raised by his grandmother, but in 1937 the boy ended up in an orphanage.

It was there, according to the veteran, that his love for music was born.

“In an orphanage, I met, or rather, I was drawn to musical instruments.

There were domra, bass and other instruments.

I tried [playing] a little bit on everyone,” he says.

At the age of 13, Rapatsky was sent to a vocational school, where he had his own orchestra.

One day a representative of the military band came there and offered to join them.

“He asks:“ Who wants to serve in a military band?

To wear a cap like Stalin's, and a belt, and an officer's bag?

Rapatsky was sent to a military unit in the Orenburg region: “These were the Totsk camps, where the atomic bomb was tested for the first time.

I was identified there as a signalman at the shooting range for tubes.

The most interesting moments of the war years Rapatsky considers the time in the cities of Przemysl, Fastov and Skalat: "There were very strong battles, and the musicians played the role of orderlies in the hospital."

“When the war ended, I came to enter the Suvorov-type school of musicians.

The veteran carried his passion for music throughout his life.

Now he is the head of the brass department at the college.

According to Rapacki, he has very talented students.

“They play brilliantly - one on the saxophone, the other decently in the fourth year on the trumpet.

I show them, and they praise me that I can still teach,” he added.