On Sunday May 1, Afghanistan celebrated Eid al-Fitr, which marks the end of Ramadan and which, along with Eid al-Adha, is the most important celebration in the Muslim calendar. For the Taliban, in power... 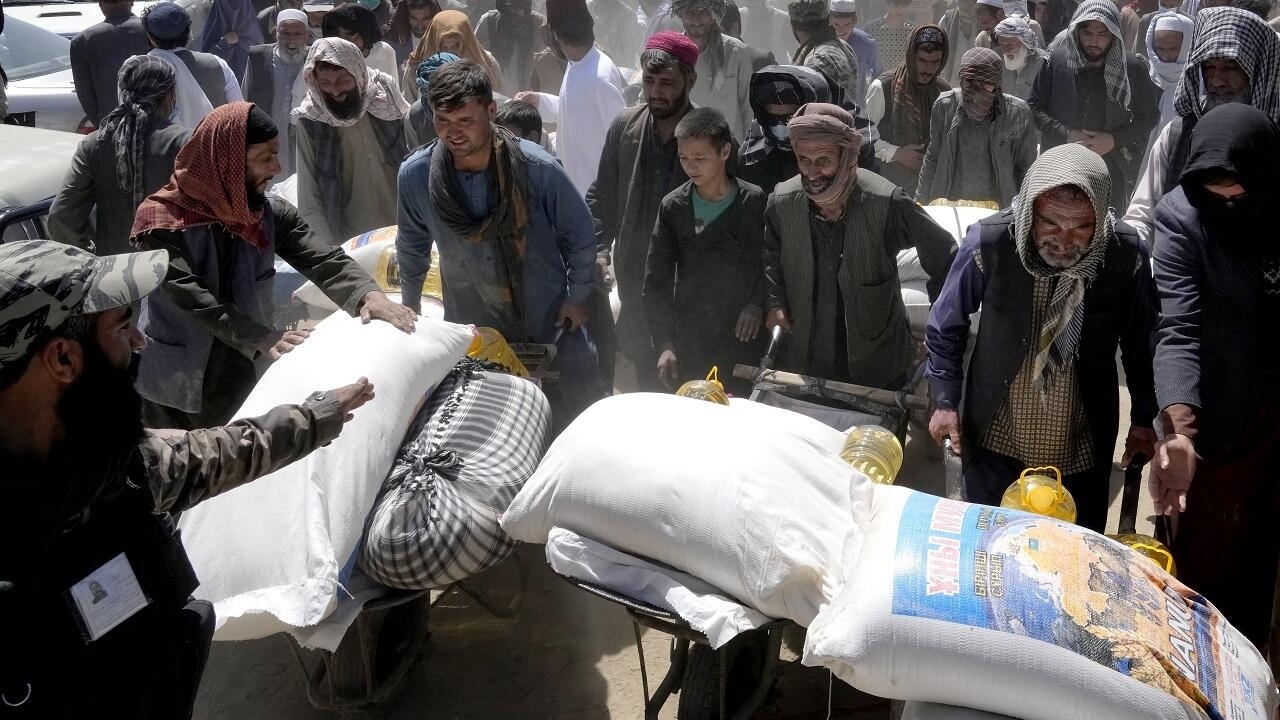 A Taliban fighter watching a distribution of food provided by a Chinese NGO for the Afghan population in Kabul, April 30, 2022. AP - Ebrahim Noroozi

On Sunday May 1, Afghanistan celebrated Eid al-Fitr, which marks the end of Ramadan and which, along with Eid al-Adha, is the most important celebration in the Muslim calendar.

For the Taliban, in power since August 15, 2021 after 20 years of war against the former government supported by the international community, it is quite a symbol.

But he cannot hide the humanitarian, economic and security crisis that the country is going through.

From our correspondent in Kabul,

With this celebration of Eid al-Fitr on Sunday, while most other Muslim countries have opted for Monday, the new Afghan regime seems to be seizing every opportunity to distance itself from the previous regime.

We saw it again on Sunday.

, which marks the end of Ramadan.

Afghanistan did not follow, as was the case in previous years, Saudi Arabia, which is followed by several Muslim countries – such as Pakistan or neighboring Iran – and which celebrate this important Muslim religious holiday this Monday May 2.

Eid al-Fitr is celebrated if the crescent moon is seen in the sky on the night that closes the month of fasting.

The Taliban claimed to have observed it, unlike their neighbors.

Some are still skeptical in the country and have preferred not to celebrate Eid on Sunday and wait until Monday.

This is the case for part of the Shiite minority.

According to a local journalist, the Taliban wanted to show that they had a monopoly on religious decisions.

The Islamic Emirate of Afghanistan in fact shows above all its religious and political authority.

A serious humanitarian crisis is raging in the country.

The UN estimates that 95% of the population does not have enough to eat.

The situation is alarming.

There have never been so many people begging in the streets as today.

We see daily food distributions organized by local NGOs, some supported by the United Nations.

There are long queues of hundreds of people forming across the capital in front of hangars where distributions of flour, dried beans and oil are taking place.

Every evening, groups of men, women and children wait outside the bakeries in the hope of receiving a few loaves of bread.

Afghans are surviving and struggling to feed their families

Many of them survive by eating only tea bread because they have no money.

There is no work, the banks are idling, many have had to close their doors.

Eight months after the Taliban took power, the economic and security record is catastrophic.

Indeed, how to invest in a country targeted by international sanctions?

Five days ago, a dozen independent UN experts called on the US government to release the foreign assets of the Afghan Central Bank, which amount to more than 7 billion US dollars.

Banks are struggling to hold on.

Few people were able to keep their jobs.

State officials themselves beg for money when they meet people who seem to have it.

It is difficult to find cash, it has been impossible to withdraw money in Afghanistan for eight months.

And the country is not done with violence either.

Attacks are increasing against the Taliban security forces and against the Shiite Hazara minority.

several attacks have been carried out against

Shiite or Sufi mosques, schools or minibuses transporting civilians in the neighborhoods of the Shiite Hazara minority.