Germany: Dortmund beaten by Bochum despite a hat-trick from Haaland

The young Norwegian Erling Haaland scored a hat-trick (including two penalties) which did not prevent Dortmund from losing at home against Bochum (3-4), Saturday during the 32nd day of the German championship. 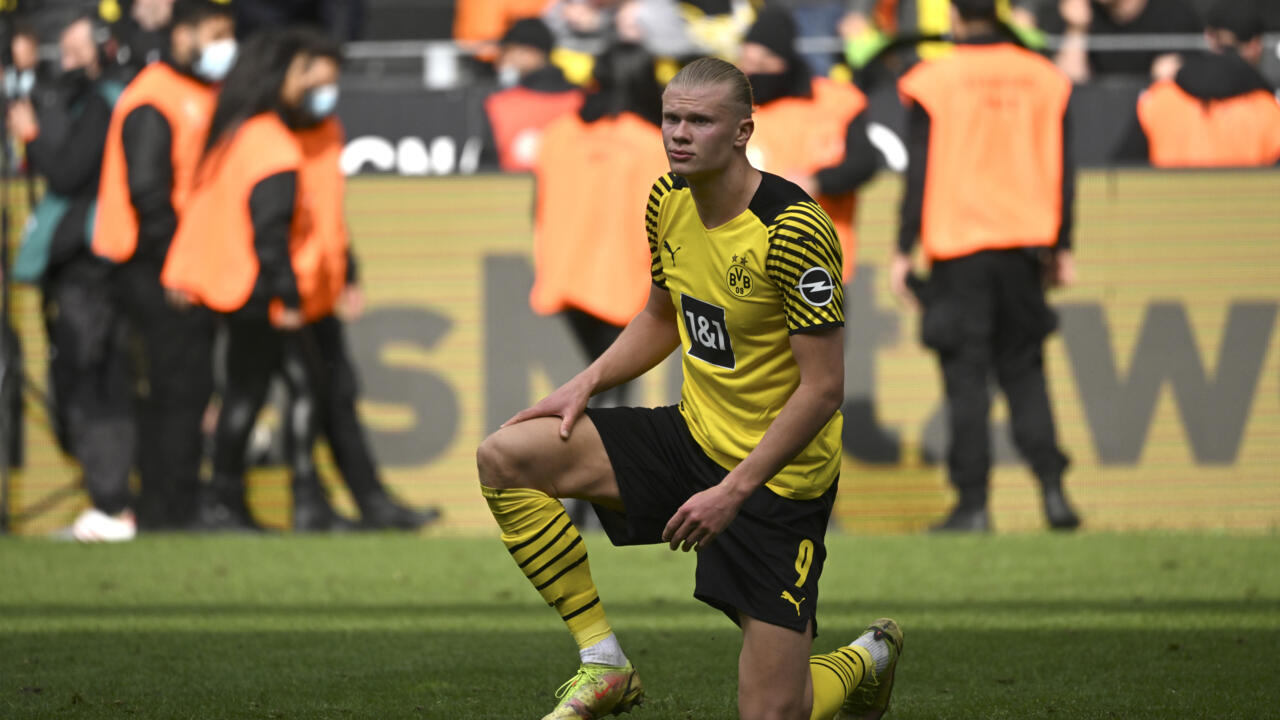 In the other matches of this 32nd day, Cologne took a big step towards a European place by winning 4-1 in Augsburg.

Bayern inaugurated their tenth consecutive league title with a 3-1 defeat at Mainz.

Haaland was probably unaware of his agent Mino Raiola's passing when he entered the pitch at Dortmund, as international media broke the news during the game.

But after a catastrophic start from Borussia, led 2-0 after eight minutes of play, he took two penalties for hand fouls reported by the VAR (18th, 30th).

Then he put his team in the lead with a somewhat lucky recovery from close range (3-2, 63rd), before Bochum struck twice again at the end of the match.

The joy of Norwegian striker Erling Braut Haaland, after scoring his 3rd goal at home against Bochum, on the 32nd day of the Bundesliga, April 30, 2022 INA FASSBENDER AFP

The 21-year-old prodigy now has 61 goals in 65 Bundesliga appearances since arriving in the Ruhr in January 2020 (85 goals in 86 appearances in all competitions).

His departure at the end of the season to a more ambitious - and richer - club seems likely.

Even if the death at the age of 54 of Mino Raiola, who was responsible for negotiating his interests, obviously casts a blur on the outcome of the negotiations in progress.

In the standings, Borussia has not yet mathematically locked in second place.

The third Leverkusen, who plays on Monday, can come back to 5 points two days from the end in the event of a victory.

For fourth place, the last qualifier for the Champions League, Cologne offered themselves a small hope thanks to their superb 4-1 victory in Augsburg, with a brace from Anthony Modeste, which takes their total to 19 goals this season .

"FC Köln" is provisionally 6th, tied with Freiburg, and just two points behind Leipzig, fourth and last qualified for the Champions League.

However, these two teams have not yet played: Freiburg travels to Hoffenheim at 6:30 p.m. this Saturday, and Leipzig plays Monday in Mönchengladbach (8:30 p.m.).

In addition, Bayern, crowned champion since last Saturday and a little demobilized, let go in Mainz (3-1) despite a new and nice goal from Robert Lewandowski, his 34th in the league this season.

The joy of the Mainz players, after scoring a third goal at home against Bayern Munich, beaten 3-1, during the 32nd day of the Bundesliga, April 30, 2022 Daniel ROLAND AFP

Mainz opened the scoring in the 18th minute through Jonathan Burkardt, completely forgotten in front of goal by central defense Niklas Süle-Benjamin Pavard.

He slipped his ball between the legs of Sven Ulreich, who had replaced Manuel Neuer, at rest, as did Thomas Müller (sick) and Kingsley Coman.

After a second goal from Moussa Niakhate (27th), Lewandowski pivoted with his back to goal to eliminate a defender and place a ball close to the post (2-1, 33rd).

But Leandro Barreiro definitely secured the victory for Mainz in the 57th minute.