Can "dynamic clearing" work around? Is it a drag on the economy? official response

China News Service, Beijing, April 29. Recently, the epidemic situation in many places in China has continued to attract public attention. Has the epidemic in Shanghai been effectively controlled? Can "dynamic clearing" be implemented according to local conditions in the future? Will it hurt the economy?   On April 29, the State Council Information Office held a press conference on adherence to 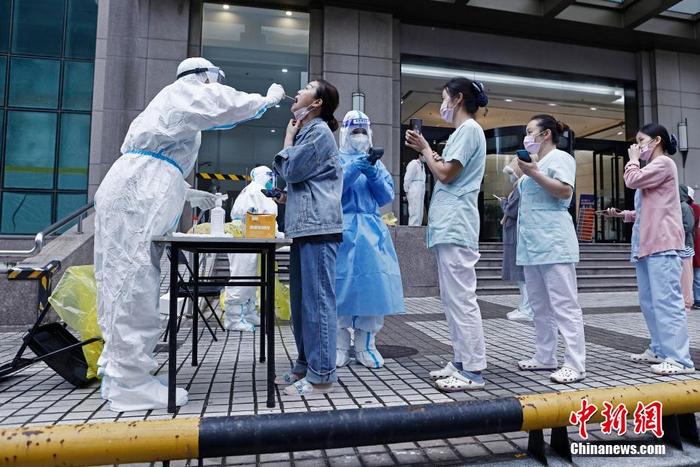 China News Service, Beijing, April 29. Recently, the epidemic situation in many places in China has continued to attract public attention.

Has the epidemic in Shanghai been effectively controlled?

Can "dynamic clearing" be implemented according to local conditions in the future?

Will it hurt the economy?

On April 29, the State Council Information Office held a press conference on adherence to "dynamic clearing" to do a good job in epidemic prevention and control, and responded to the above-mentioned topics.

——The initial success of the Shanghai eradication battle

At the meeting, Li Bin, deputy director of the National Health and Health Commission, introduced that since the end of February this year, in the face of the epidemic of Omicron mutants with significantly enhanced transmissibility and secrecy, the epidemic in my country has shown the characteristics of many points, wide areas and frequent occurrences.

The prevention and control work has experienced the most severe test after the "Wuhan Defense War".

In this regard, we have always adhered to the "dynamic clearing" without hesitation and unwavering, and coordinated the deployment of testing, flow adjustment, transfer, isolation, admission and other forces as soon as possible to minimize the spread of the epidemic.

He said that at

present, the clustered epidemics in Jilin and other places have been effectively controlled, Shanghai's battle to clear zero has achieved initial results, and the national epidemic has shown a fluctuating downward trend.

- 90% of the population has been vaccinated

Booster immunizations have been completed for 160.425 million people.

On April 26, on Jinshan Road in Shanghai, people waited in an orderly manner for nucleic acid testing and sampling.

Li Bin introduced that more than two years of epidemic prevention and control practices have proved that the practice of "dynamic clearing" has maximized the protection of people's lives and health, and minimized the impact of the epidemic on the country's overall economic and social development. Influence, the way is right, the effect is good, it is the magic weapon for China to prevent and control the epidemic.

Li Bin emphasized that epidemic prevention and control is an overall battle, and we must enhance awareness of the overall situation and adhere to a national game of chess. Only when the epidemic is controlled in an orderly manner can we provide a solid guarantee for people's lives and health, and create favorable conditions for normal production and life.

Only by persisting in "dynamic clearing" and keeping the local epidemic under control can all localities win the overall victory of national epidemic prevention and control.

if the "dynamic clearing" in some places is not resolute and decisive and flexible, the virus may take root locally, leading to the rapid spread of the local epidemic, leading to the spillover of the epidemic, and even cross-regional transmission, becoming the "spreader" and "spreader" of the epidemic. "Amplifier", causing heavy loss of people's lives and property, seriously affecting economic and social development

"Under the premise of adhering to the general policy of 'dynamic clearing', we encourage local governments to explore and summarize some good experiences and practices according to the local epidemic situation and characteristics, so as to further improve the scientific and accurate level of epidemic prevention and control, and strive to use the smallest cost to achieve the greatest prevention and control effect." He emphasized.

——"Dynamic clearing" and economic development are not in opposition

Liang Wannian, head of the expert group of the National Health Commission's Leading Group for Epidemic Response and Disposal, responded that

"dynamic clearing", economic development, and normal production and life are synergistic, not antagonistic

He said that anti-epidemic and economic development are synergistic, and they are one of the main goals of "dynamic clearing".

The third is to effectively guarantee the normal production and life of ordinary people.

Liang Wannian said that the Chinese government has always regarded balancing this relationship as an important goal during the entire anti-epidemic process. The Chinese people have also been working hard to find and explore how to achieve this balance under different epidemic situations and in different regions. , to find the means, paths and methods of balance.

Omicron is very different from the original strain. It is extremely concealed and transmissible. How can we curb the spread of the epidemic as soon as possible without carrying out nucleic acid for all staff and city-wide lockdown?

Liang Wannian said that although Omicron has the characteristics of strong transmission, strong concealment, and many asymptomatic infections, it does not mean that early detection, early reporting, early isolation and early treatment cannot be achieved.

"To truly achieve the 'four mornings', we don't necessarily need to do nucleic acid for the whole city, or even the whole city is closed,

——Require all localities to set up "yellow code" hospitals

Li Bin said that all localities have also taken practical and effective measures to do everything possible to ensure the medical needs of the masses.

To solve this problem, we mainly seized the key links in four aspects: first, to ensure the treatment of critically ill patients; second, to meet the medical needs of special groups; third, to improve medical security in areas where epidemics occurred; fourth , to coordinate the epidemic prevention and control and medical services within medical institutions.

The National Health and Health Commission has deployed,

requiring all localities to set up "yellow code" hospitals and open "cloud clinics". For critically ill patients, in the case of unknown nucleic acid test results, emergency rooms, emergency rooms, operating rooms, and wards should be used in a timely manner and standardized. In

the buffer area set up

, medical staff strictly implement the responsibility system for the first diagnosis and the emergency and critical care system, do a good job in personal protection, provide timely and effective treatment, and do not excuse or delay treatment for any reason.

He also said that for hemodialysis patients, cancer patients such as radiotherapy and chemotherapy, as well as special groups such as pregnant women and newborns, the local epidemic prevention and control departments should do a good job of investigation and statistics, and establish a ledger to achieve " The bottom line is clear and the situation is clear", and the continuous medical service guarantee is effectively implemented.

For patients with chronic diseases who take medicine for a long time, the primary medical and health institutions can provide services to meet the needs of medical services by issuing long prescriptions.