This Thursday, in the press, a word that often comes up is that of "blackmail", after the suspension by Russia of gas deliveries to Bulgaria and Poland. 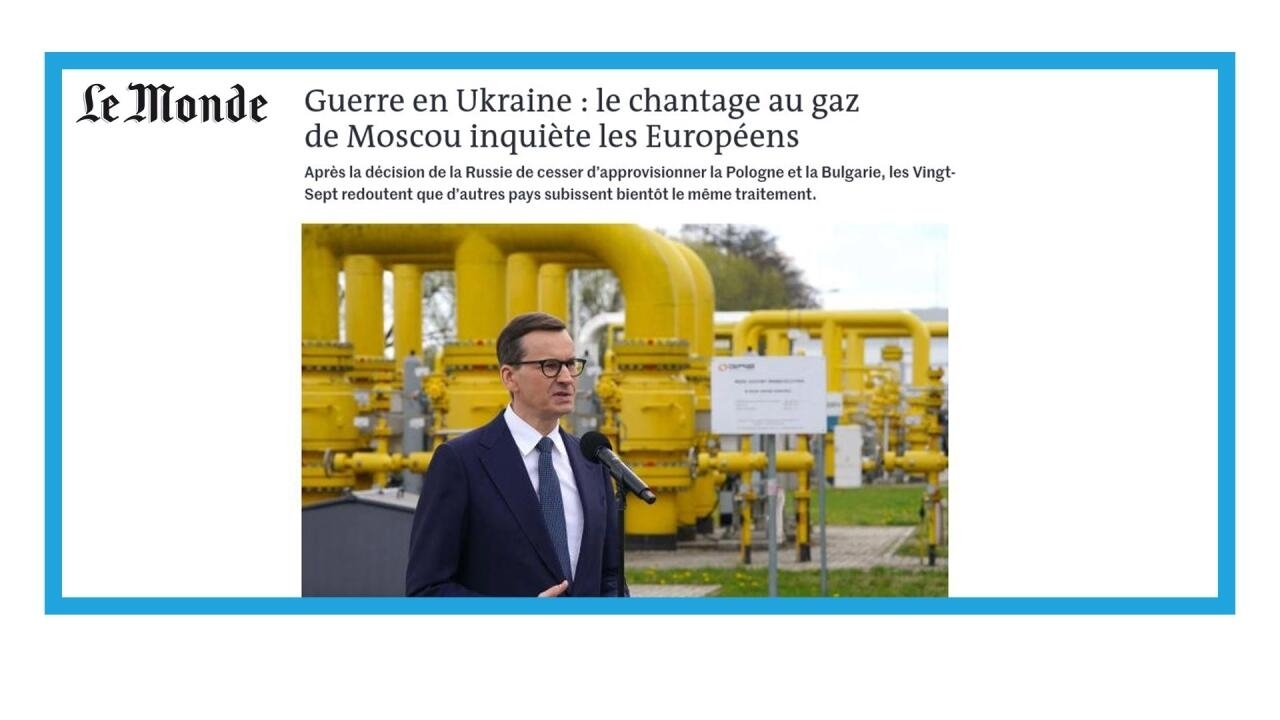 Receive the France 24 press review every morning on your iPhone or any other mobile.

And also always on your PC, by becoming a

Blackmail is the word used by the President of the European Commission, Ursula Von der Leyen, after Russia's decision to stop supplying gas to Bulgaria and Poland.

The correspondent of Le Monde in Brussels recalls that if these two countries are very dependent on imports of Russian gas, they only represent between them 8% of the total of these imports into the European Union, and raises a question: who will be the next? country on the list?

The article recalls that "if Germany finds itself thus deprived of Russian gas, it will be a completely different story."

, these Russian sanctions are above all a signal intended for Berlin.

The columnist of the conservative German daily recalls that "Moscow's decision to stop gas supplies to Poland and Bulgaria will not cause significant difficulties for the two countries […] and that it must be understood as a signal warning and a test for Germany."

The conservative daily castigates the government of Olaf Scholz for having publicly stated the "great vulnerability of the country" vis-à-vis Russian gas, and more generally "the naivety of the German left vis-à-vis the military power of Moscow".

The solution, for the editorialist: "a Germany less discouraged, more confident in itself and in its partners, that would send the right signal to Moscow."

Meanwhile, and it is the British

which points out, Russia continues to generate billions of euros thanks to its gas and oil exports.

The British daily reveals an annoying truth: Russia has doubled its income from oil and gas exports since the start of the invasion in Ukraine, for a total amount in two months of 62 billion euros, of which 44 billions spent by the European Union alone, to obtain supplies of Russian gas and oil.

is pessimistic: "Even though Russia's exports have been reduced by war and sanctions, the country's dominance as a source of gas has meant that the cut in supplies has only raised prices" and concludes "Russia has caught the EU in a trap, where new restrictions will drive up prices even further, dampening its revenues despite the best efforts of European governments."

On the diplomatic level, this time, the efforts of the Secretary General of the United Nations, Antonio Guterres, who was in Moscow yesterday.

Except that the correspondent

in the Russian capital writes from the outset that this visit only demonstrated "the gulf" between the Russian vision of the conflict and that of the nations which are campaigning for a ceasefire.

The Secretary General of the United Nations was received by Vladimir Putin, who repeated to him that the accusations against his country were false (he told him precisely "you have been deceived"), whether it concerns the massacres committed in Boutcha in the suburbs of kyiv or of the sabotage of the evacuations of civilians from Mariupol.

, the result of this visit to Russia was known in advance: "no significant negotiation can bear fruit until the battle of Donbass, designated the main objective of the Russian offensive, has not taken place."

, "Moscow is trampling in the Donbass".

The newspaper recalls that "certainly, the Ukrainian authorities recognized on Wednesday an advance of Russian troops in the east of the country, with the capture of several small towns", but "the Russian military operations in the eastern region do not seem more successful than the previous ones".

cites the British Ministry of Defense and the Pentagon which claim that the problems of the Russian army are not settled: "lack of coordination, and morale at the lowest".

headlines on Jean-Luc Mélenchon's takeover attempt on the left.

Indeed, like a great baron of financial capitalism according to the right-wing daily, the leader of the radical left is taking advantage of his crushing score of 22% in the presidential election to impose an alliance with the other left-wing parties – none of which has reached 5%, in view of the legislative elections to be held in June.

describes a Jean-Luc Mélenchon "long despised by the Socialists" (his former party), and who "savors the moment while waiting for the accomplishment of his personal revenge which has been running since the European referendum of 2005."

Precisely, it is the European question which is one of the main sticking points between rebellious France on the one hand, the Socialists and the Greens on the other.

recounts – in its own words – the “bombinette” sent by rebellious France: a “disobedience to the European treaty” which would be included in the program of this possible future left-wing alliance.

Between substantive differences and personal resentment, the daily quotes an elected official who is taking part in these union negotiations: "The general state of mind is not good".

Finally this story, which takes place in the United States, in Nashville, Tennessee, the capital of country music and Rock'n'roll.

, he went on a report to an evangelical pastor who only has rock'n'roll jeans.

Indeed, Greg Locke has decided to fight against the influence of Satan in society, in the tools of influence of the great Evil One, there are the books of the "Twighlight" saga, and those of the "Harry Potter" saga. .

For Pastor Locke "these books are demonic, full of spells, metaphors, necromancy".

His solution: organize auto-da-fés, that is to say, to burn these books…