Positive signs have emerged in China-EU relations, which have suffered frequent headwinds over the past year. Recently, the 23rd China-EU Leaders' Meeting was held by video. This is the first time in nearly two years that China and the EU have continued the dialogue at the highest level. The outside world believes that this shows that both China and the EU are striving towards the direction of s 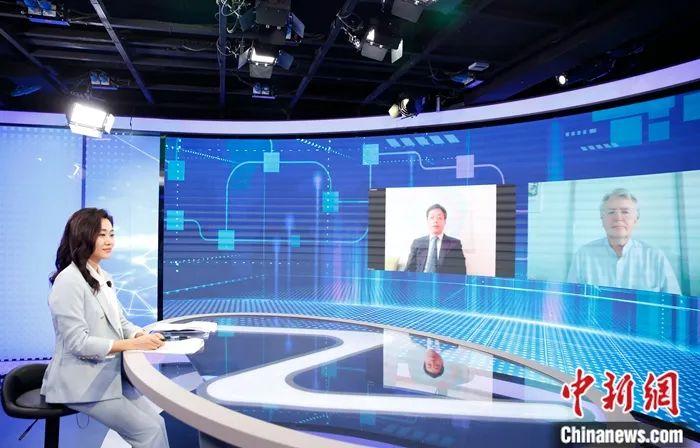 Positive signs have emerged in China-EU relations, which have suffered frequent headwinds over the past year.

Recently, the 23rd China-EU Leaders' Meeting was held by video.

This is the first time in nearly two years that China and the EU have continued the dialogue at the highest level.

The outside world believes that this shows that both China and the EU are striving towards the direction of stable development of bilateral relations, which is of great significance to the turbulent and complex world under major changes.

With the addition of new variables such as the Russia-Ukraine conflict, will China-EU relations usher in a new "decisive moment"?

How can China-EU cooperation dialogues in various fields get back on track as soon as possible?

Is the future cooperation or confrontation?

What changes will the global economic and geopolitical order usher in?

In this regard, China News Agency's "East-West Question, China Dialogue" invited Joerg Wuttke, Chairman of the European Union Chamber of Commerce in China, to have a dialogue with Wang Yiwei, Director of the European Union Research Center at Renmin University of China and the EU "Jean Monet" Chair Professor.

Woodker said that in all assessments, investment in China is irreplaceable by any other country, and he suggested listening to Europeans.

Wang Yiwei also called for China and the EU to get out of the trap of the US "dual narrative", develop bilateral relations independently, and jointly oppose "decoupling" and "new cold war".

China is the "market of the future"

China News Service: The epidemic has blocked many international air routes. How will it affect China-EU economic and trade relations?

Actually, (most) European companies are doing well in China without any obstacles.

Our business is ongoing, employees can produce, we can sell to customers, many end up in Europe, and the manufacturing sector is pretty strong.

In addition, the pandemic has disrupted people's movement, with no top executives coming to China and no partners going to Europe, which means future investments may be delayed or even put on hold.

Moreover, the understanding between Europe and China will also decrease, which is not a good phenomenon. Communication is necessary and cannot always be conducted online.

China News Service: China and the EU are important trading partners to each other. What is the resilience and potential of China-EU cooperation in the future?

The trade between Europe and China is very frequent, which shows that European consumers really like Chinese products.

Europeans buy about 1.3 billion euros of goods from China every day, showing the quality and competitiveness of Chinese products.

But trade flows are very uneven in a way, with Europe only selling 600 million euros of goods to China every day.

High demand in Europe is one source of resilience in bilateral trade.

Products designed and produced in China are more marketable and competitive, and the Chinese market is also attractive to European companies, which is also a source of resilience.

In addition, although the epidemic has had an impact on the supply chain, it can be called a miracle that the trade shipments between Europe and China have remained good.

China is the "market of the future", there is no doubt about this, and we will continue to invest in China.

In addition to trade in goods, (EU-China) trade in services still has a long way to go and has great potential.

The original model of the two major markets in China and Europe is production in China and consumption in Western markets such as Europe and the United States.

In the process of moving from the original mid-to-low-end industrial chain to the mid-to-high end, China is unleashing the potential of huge new consumption.

Europe is now affected by the conflict between Russia and Ukraine, and it desperately needs a larger market to boost confidence. Otherwise, the conflict will continue, many investment funds in Europe have flowed to the United States, and Europe has also received a large number of refugees. For the resilience of the supply chain, Security, autonomy and control, and decentralization and diversity actually violate certain principles of many markets.

'Europe wants to deal with China'

China News Service: There is a conflict between Russia and Ukraine. Some people think that the world may once again fall into the danger of a Cold War-style confrontation between camps. There may also be such a "decisive moment" in China-EU relations. How do you view this issue?

I do not fully agree with this statement.

First of all, the main contradiction that determines this moment is the United States. We all know that the conflict between Russia and Ukraine was largely provoked by the United States. To subvert the post-war international order is the main challenge facing both China and the European Union.

Central Europe is the most certain force in the world.

There is no doubt that our political system and development prospects are very certain, and the great revival is irreversible.

The EU is also a normative force, built up from the rule of law.

In the face of profound changes unseen in a century, China-EU cooperation is crucial.

The world is even more dangerous if Europe is led astray by the Americans into a so-called "new Cold War" narrative.

We cannot get caught up in the so-called democratic and authoritarian narrative, and the Russian-Ukrainian conflict should eventually return to the indivisible security concept of the 1975 Helsinki Final Act, which I think should have a lot of consensus.

The world has completely changed.

It's not even a "Cold War" anymore.

This is a "hot war" taking place on the European border, and its spillover effect has had a huge impact on European society.

Germany's decision to increase its military budget and impose its toughest ever sanctions on Russia has hit the Russian economy, but also has a negative impact on Europe's own society and economy.

Europe wants to deal with China and hopes that China can be our good partner.

Affected by the conflict between Russia and Ukraine, the German government temporarily suspended the approval process for the "North Stream-2" project.

Is China and the West Conflict or Cooperation?

China News Agency reporter: In the future, will China and the West focus on cooperation or confrontation?

First of all, the West is not monolithic, and the United States and Europe are also different.

The United States has launched an "Indo-Pacific strategy" and even wants to develop an Indo-Pacific version of NATO, because the rise of China challenges the US' national identity, and it is not "God's chosen".

But Europe is different. Europe does not establish its identity with this concept of "God".

Europe has the rationality of Greece and the spirit of some laws like Rome.

The European Union today is also a force for peace.

In fact, whether Germany or France and other founding members of the European Union, they will not follow the United States completely emotionally.

I think China and Europe should get out of the narrative trap of the United States and develop our bilateral relations independently.

How will EU-China cooperation move forward?

We must find areas where Europe and China can deepen cooperation.

Take climate change, for example. Both China and Europe face the challenge of delaying climate change targets because of high energy costs and insecure energy supplies.

The EU and China can communicate with each other on this common challenge, reach consensus and act swiftly.

China News Service: In the face of the epidemic, geopolitics and other issues, will European companies adjust their investment and development strategies in China?

We hope that the more investment and sales (European companies in China), the better.

European companies shouldn't just look at the impact of the pandemic in the next quarter or this year and make hasty conclusions. I think the business community should focus more on the long-term.

Our research with the World Bank last September showed that China has three development drivers that will drive China to maintain strong growth through 2050 (the next 30 years).

In all our assessments, the amount of investment in China is irreplaceable by any other country.

Can globalization return to U.S. dominance?

China News Service: From a historical perspective, how will the global economic and geopolitical order change?

Whether it can return to US-led globalization is a big question mark.

Now sanctioning Russia to weaponize the U.S. dollar has accelerated the de-dollarization of settlements not only in Russia and China, but even in European countries, including Middle Eastern countries.

I believe that in the future, the world will not fall into the so-called "new cold war" pattern of Sino-US bipolar confrontation, but whether it will become more decentralized, disordered and chaotic is a question we are very worried about now.

I feel that over the years, Europe's influence or status in the world may be declining, but its status in China's foreign affairs or domestic affairs is rising.

When China was reforming and opening up, it first advocated to learn from the United States, and learned more about the disorderly expansion of private capital. Now, in promoting common prosperity, China needs to learn more about Germany’s Rheinland model and social market economy.

China and Europe have a long and rich historical and cultural foundation, both in terms of digital economy and governance, while the United States is private capital oriented.

China and Europe actually have more in common, even shared values.