2524 job vacancies are displayed on the Nafes platform. 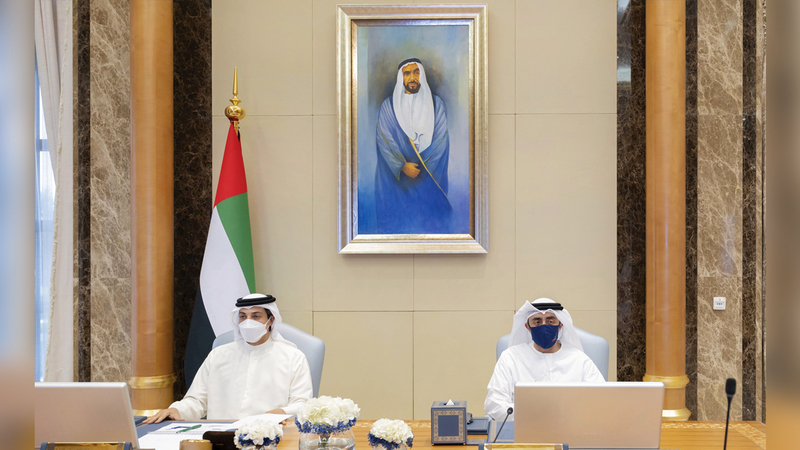 2524 job vacancies are displayed on the Nafes platform.

Mansour bin Zayed and Abdullah bin Zayed during the second meeting of the Emirati Competitiveness Council.

H.H. Sheikh Mansour bin Zayed Al Nahyan, Deputy Prime Minister and Minister of Presidential Affairs, chaired the second meeting of the Emirati Competitiveness Council, in the presence of H.H. Sheikh Abdullah bin Zayed Al Nahyan, Minister of Foreign Affairs and International Cooperation and Vice Chairman of the Board, where the most prominent stations and results of the council were reviewed since Adopting it, launching the Nafees program, and discussing the launch of more programs and initiatives aimed at providing all means of support to Emirati cadres in various sectors, and enhancing their effective presence in the various development paths the country is witnessing.

The meeting revealed that there are 2,524 vacancies displayed on the Nafes platform, while the total number of new citizens joining the private sector since the launch of the program last September has reached 5,558 citizens.

In detail, His Highness Sheikh Mansour bin Zayed Al Nahyan stressed that the UAE leadership attaches great importance to supporting citizens in various economic sectors, especially the labor market, and is keen to provide opportunities to enhance the contribution of Emirati cadres and raise the rates of their presence in the private sector, noting that the Council is competitive Emirati cadres seeks, through an integrated set of programs and initiatives, to qualify Emirati competencies and energies, to raise their competitiveness in the growing labor market in the country.

His Highness said: "The Emirati Cadres Competitiveness Council is working, in cooperation with strategic partners, to increase the objectives of Emiratisation in the sector and create more job opportunities in various sectors in the country. We are keen to provide incentives and initiatives that will supply the Emirati labor market with qualified and trained national talents and cards on the highest level".

The meeting discussed the data that was achieved during the last stage, as the figures showed that the total number of new citizens joining the private sector since the launch of “Nafis” amounted to 5558, while the number of companies that appointed new employees increased to 1774 companies.

Regarding the importance of the achieved numbers, the Secretary-General of the Emirati Competitiveness Council, Ghannam Al Mazrouei, stressed that reaching 5,500 jobs in the private sector reflects the confidence of citizens in this program, and stresses its importance in opening up job prospects for job seekers.

Al Mazrouei said: “Our goal is to provide suitable jobs for citizens in the private sector.

Since its launch, the program has witnessed a high demand from citizens, which confirms its importance as a platform that connects citizens looking for work and private sector companies looking for employees.

He added: “We are preparing for new steps, in cooperation with our partners, that contribute to perpetuating the pioneering role of the program in achieving the aspirations of citizens and giving them the opportunity to work in jobs that are compatible with their capabilities, talents and competencies, and increase their presence as a qualified workforce capable of meeting the requirements of future jobs, in line with the next stage. And the development that the country is witnessing in all fields.”

Al Mazrouei stressed that “the human being is the most precious wealth for the nation, so leadership provides him with everything that contributes to enhancing his capabilities and raising his efficiency, and is keen to give citizens a decent life that befits them, through jobs that are consistent with their capabilities, and provide them with financial and social security, which is reflected positively on society as a whole, and achieve prosperity and happiness for the people of the Emirates.”

Within the framework of Nafes' goals to enhance the efficiency and competitiveness of national cadres, two packages of initiatives were launched within the "50 Projects", the first in September 2021, and the second last March.

As for the second package of initiatives, it included four training programs, including:The Competencies Program, which aims to develop the competencies of national cadres and develop their specialized competencies to obtain international professional certificates, and the Nursing Sector Development Program, which aims to develop national competencies in the field of nursing through paid scholarships and through the health assistant program for high school graduates, and the diploma The Higher Diploma in Emergency Medicine, and the Bachelor’s Program in Nursing, which aims to qualify and empower 10,000 citizens in the health sector over the next five years, in addition to the “Experience Program” which is a 12-month training program with financial rewards in private and semi-governmental companies to support Developing the experiences of Emirati graduates in a variety of sectors, and the Career Guidance Program, which is based on providing career guidance and guidance services that help discover suitable skills, opportunities and career paths, in addition to providing guidelines for writing a CV, the basics of interviewing, and work ethics.

The Emirati Cadres Competitiveness Council has held many partnerships with the federal and local authorities concerned with the program, with the aim of supporting “Nafis” and implementing the training programs included in the initiatives, most notably the UAE University, the Abu Dhabi Global Market Academy and the Center for Excellence for Applied Research and Training (CERT), which is the commercial, research and training arm. The Higher Colleges of Technology, in addition to the Fatima College of Health Sciences, which is affiliated with the Abu Dhabi Center for Technical and Vocational Education and Training (ACTVET), and the Federal Youth Foundation, in addition to many private and semi-private companies that fit the program criteria.

• 5558, the total number of new citizens joining the private sector since the launch of "NAFES" in September 2021.

• 1774 The total number of companies that have appointed new employees.

• 25,876 The number of citizens registered on the "Nafis" platform and eligible to benefit from the "Nafis" initiatives.

• 4074, the number of beneficiaries of the "Nafis" platform.