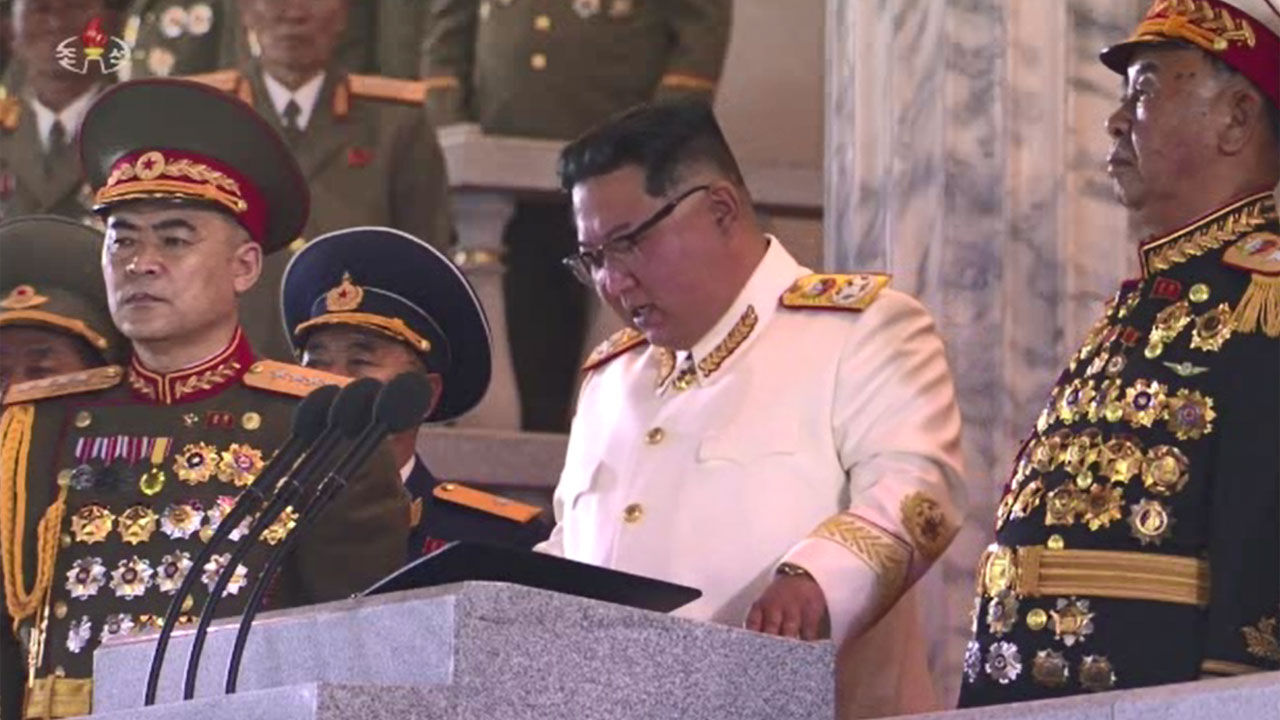 Continuing the conversation with Ahn Jung-sik, a reporter specializing in North Korea.

Q. How has Kim Jong-un changed the nuclear threat to South Korea?

[Ahn Jung-shik, reporter specializing in North Korea: It has been several decades since North Korea has developed nuclear weapons.

However, until now, we have been talking about developing nuclear weapons defensively for their own security, not for external attack.

Let's listen to what General Secretary Kim Jong-un said at the 7th Party Congress in 2016.]

[Kim Jong-un/General Secretary of the North Korean Workers' Party, 7th Party Congress 2016: As long as an aggressive hostile force does not infringe our sovereignty with nuclear weapons, as has already been declared, nuclear weapons [North Korean reporter Ahn Jung-sik: I

However, the words have changed at this military parade to celebrate the 90th anniversary of the founding of the Korean People's Revolutionary Army.]

[Kim Jong-un/General Secretary of the Workers' Party of Korea, April 2022 Parade: Our nuclear weapons cannot be bound by one mission: prevention of war.

If any force tries to usurp the fundamental interests of our country, our nuclear force will have to make an unexpected second mission.

] It can use nuclear weapons as an enemy, and it can be seen as an outright nuclear threat.]

Q. What is the 'fundamental interest' North Korea is talking about?

It seems that everything that harms North Korea, such as the international community's condemnation of nuclear tests or ICBM launches, and various economic sanctions, is a fundamental interest and can be used as a justification for the nuclear threat.]

Q. The heightened North Korean threat, what about us?

But now, I think we have to face the reality a bit.

Since North Korea's nuclear development poses a real and real threat to us, military deterrence against North Korea is important. There should be no disagreement on this point.]

Q. What about future inter-Korean relations?

[Reporter Ahn Jung-shik, specializing in North Korea: North Korea is developing nuclear weapons, but that does not completely lock down inter-Korean relations.

We have to live as neighbors with North Korea, which has nuclear weapons. This is also the stark reality we are facing.

Military deterrence must be ensured, but necessary exchanges are inevitable.

Considering that UN sanctions are an unchanging constant, inter-Korean economic cooperation will not be easy for the time being.

It is dangerous to put aside the nuclear issue and to be sentimental about inter-Korean economic cooperation, but it is also not appropriate to go in the opposite direction, such as shutting down inter-Korean relations completely.

I think we need such a cool attitude as we pursue inter-Korean relations as much as possible while facing the reality calmly.]