Boys in Afghanistan are becoming the breadwinners for their families

Nine months ago, Karzai Baluchal was a tenth grader, learning math, physics, and even a little art history. Today, he is a street vendor selling tissue paper. On a good day, he could make four dollars or more, which is enough for his family to eat. 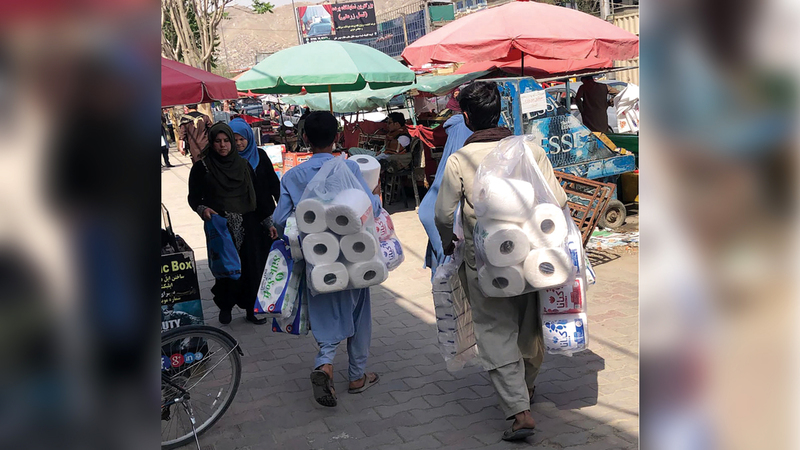 They leave school to earn a living on the streets

Boys in Afghanistan are becoming the breadwinners for their families

Nine months ago, Karzai Baluchal was a tenth grader, learning math, physics, and even a little art history.

Today, he is a street vendor selling tissue paper.

On a good day, he could make four dollars or more, enough for his family to eat.

Karzai, aged 16, is among thousands of students who have had to drop out of school or drop out to work since the Taliban seized power in August.

With almost no foreign aid entering the country and a large number of unemployed adults, more school-aged boys are supporting their families.

In Kabul, war and poverty have long created a permanent underclass of child beggars, who collect rubbish and polish shoes, but their numbers have doubled in recent months.

Today, boys roam the streets of the capital, toiling in markets, garages and landfills.

While the Taliban government has sparked international outrage to prevent girls from enrolling in secondary schools, it has also encouraged boys to get an education.

A spokesman for the Ministry of Education, Aziz Rahman Rayan, said that six million boys are currently in schools, in addition to 2.7 million girls.

In the Afghan capital, some boys go to school in the morning and work in the afternoon.

In a non-profit program called Ashyana, more than 1,500 working boys attend classes in the morning and have lunch before taking to the streets.

The director of the program, Youssef Nawabi, says that "their need has increased significantly in recent months," explaining, "The rich have left, the poor have become somewhat poorer, and the very poor are in despair."

Over the past two decades, he noted, international money for social programs has poured in, much of it going to children, "and now it's all stopped."

For boys like Karzai, who grew up in an age of rising expectations for Afghan youth, with new schools across the country and burgeoning private universities, being forced into decent work has been especially difficult.

His younger brother (Shaheed - 14 years old) was also forced to drop out of school and accompany him on his daily tours.

"I try to keep my mind alive, but I carry a stone on my shoulder every day," Karzai says.

One day last week, the brothers headed into town early, and took a taxi for 10 cents.

They stopped at a supplier, picked up plastic bags of kitchen and bathroom rolls, and set off.

At first they displayed their wares at the entrances of mobile phone dealers, beauty salons, and hardware stores, but there was no demand for them.

As they made their way through the crowds of shoppers and beggars, they met potential customers, who said the $1.10 bag was too high.

Along the way, Karzai passed many restaurants, where he regularly sold.

Now they are all closed for Ramadan.

The brothers walk all day long without eating or drinking.

"It is hot, and it is especially difficult for me and my brother," Karzai said.

Then, they try their luck with a bunch of brightly lit jewelry stores, but the guard keeps them away.

Finally, a man selling coins at a table offered to buy a roll of toilet paper.

And then the brothers exchanged quick smiles.

A man, Najib Bashir, 35, asked about Karzai and his brother's situation, then laughed sadly.

"I am in the same situation they are in," he said.

Before the Taliban seized power, the father of four worked for the World Bank, but the bank closed its office in Kabul, and the Afghan young man has been unemployed ever since.

He was hoping to get a foreign visa.

Now, he earns a little more than four dollars a day, and comments: "It's not enough, but what choice do I have?"

• In Kabul, war and poverty have long created a permanent underclass of child beggars, who collect rubbish and polish shoes, but their numbers have doubled in recent months.