Threats to Dr. Pinto that the Prosecutor's Office collects in her accusation: "You're a crazy whore. We have time and money to finish you off"

In its report of conclusions, to which EL MUNDO has had access, the Prosecutor's Office recounts a long campaign of "coercion", "threats"; and "injuries" for... 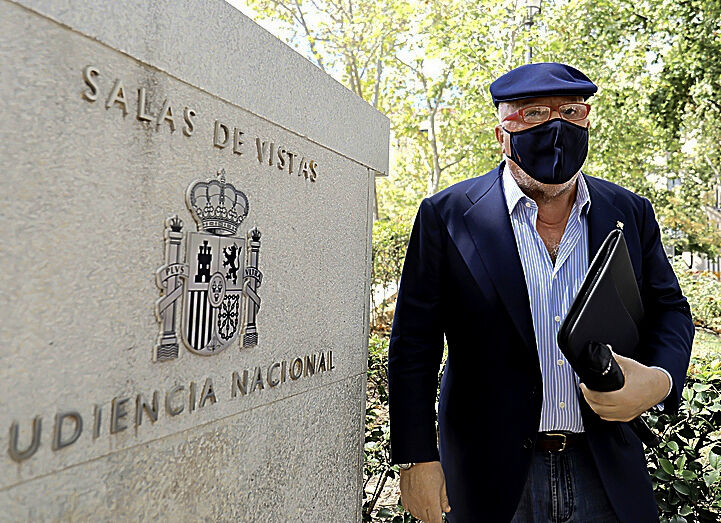 "Between September and December 2013, Elisa Pinto began to receive threatening phone calls and messages from Francisco Javier López Madrid, telling her, among other things, that he had hired a commissioner named Villarejo whom he described as the sewers of the State to help him solve his resistance, who was an expert in generating false alibis and in putting 'chulas' like her, or the people he had hired, in their place," says the text from the Public Ministry.

The prosecution recounts a meeting between López Madrid and Villarejo "at the Cenyt offices in Torre Picasso and from there, following a preconceived plan, they moved to Dr. Elisa Pinto's office where they harassed her so she wouldn't report that they were watching her."

From that moment on, the prosecution has made a detailed account of the threats received by telephone by Elisa Pinto from two mobile phones that she attributes to López Madrid.

And she also recounts episodes of harassment of the doctor's children in the college.

"We are also waiting for you," says the letter that recounts the 'visit' to the doctor's son.

We are going to destroy your life.

Or do you think you can get away knowing so much?", "You're a whore, you're going to pay dearly for making the list", "don't pick up the phone because we'll send you a message with a knife so you understand, this won't go away end", "you know that the end of all this will be that we kill you, this can only end up ending you,

you're a crazy bitch who thought you were going to get away with it, are your children safe?

You are alone and no one is going to help you.

You deserve everything that happens to you and what will happen to you as a traitor."

The messages began in 2013 and continued until 2015 "at the request of the accused", the prosecution points out: "Even if you wear protection, we will find the occasion", "you have a son in a cast. You should take good care of him, at this age they suffer unexpected accidents", "have be careful because we are close", "today you have not gone out all day and we are bored, your children may go to mass on Sunday", "This can only end up killing you. We are waiting to see you take your children to mass", " You're a crazy whore. We have time and money to kill you", "Are your children safe? And for how long? Whenever we want, we'll prick you again" (The doctor suffered two attacks with a knife, one of them in the presence of her eldest son).

And the story of the prosecution continues with the threats: "You are alone. No one is going to help you. Your friends will get you out of this", "Do you know that the person who pays us went to watch the game in Lisbon on a private plane while you Do you stay locked up? Remember: money and power, you are dead", "This week we have followed your children. The eldest went to a friend's house on Wednesday. Be careful, the house is not very safe. Anyone could enter", "whore Jewish madwoman", "Villarejo and Hachuel are very angry. Shut your mouth or they will shut it to you", "López Madrid will end up killing you and you know it... The best thing would be for him to kill only you", "López Madrid says that no judge is going to have balls to accuse him of harassment and that if he had those balls he would also have a price, you'll end up looking crazy", "You are going to die, bitch, your children are going to die," the judge recounted in six pages of threats.

As this newspaper has already reported, the Public Ministry, in a case that began in 2012, accuses those named of "continued crime of coercion, threats, against the administration of Justice, and two crimes of injury