The death toll of the new crown in the United States is approaching one million, and the most dangerous is still to come

China News Service, April 24 (Reporter Meng Xiangjun) As of April 24 local time, the number of deaths in the United States due to infection with the new crown virus has exceeded 991,000.   A few days ago, the American media, which originally focused on the fierce fighting in the Donbass of Russia and Ukraine, suddenly turned their attention to their own affairs. A number of US media headlines f 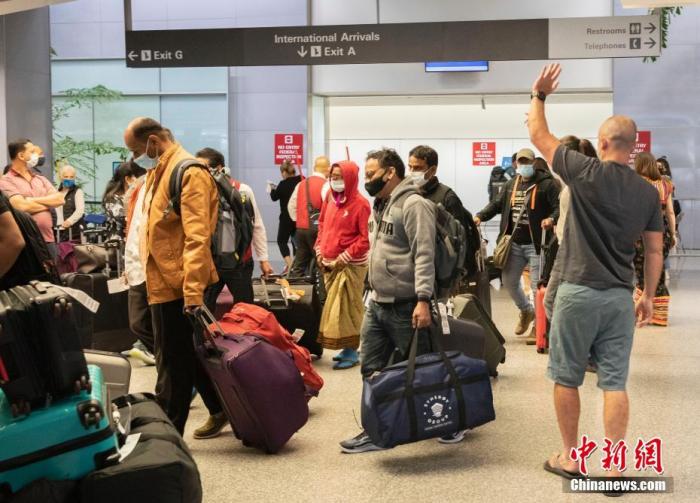 China News Service, April 24 (Reporter Meng Xiangjun) As of April 24 local time, the number of deaths in the United States due to infection with the new crown virus has exceeded 991,000.

A few days ago, the American media, which originally focused on the fierce fighting in the Donbass of Russia and Ukraine, suddenly turned their attention to their own affairs.

A number of US media headlines focused on a small mask.

It has been three years since the outbreak of the new crown epidemic. Unexpectedly, Americans are still arguing about whether to wear masks or not.

The source of the matter has to start with a judge who was criticized as "unqualified".

[Confirmed as "illegal", the government is disappointed]

It turned out that on the 18th local time, she made a ruling, which triggered a "big debate" in American society.

She overturned the decision of the Centers for Disease Control and Prevention (CDC, hereinafter referred to as the CDC) to extend the implementation of the "mandatory mask order" on the public transportation system.

You know, this mask order has been with Americans for more than a year. It will be implemented at the end of January 2021 and will expire on April 18, 2022.

Because the recent epidemic is still very serious, the US Centers for Disease Control and Prevention intends to extend the decree until May 3.

Data map: Judge Mizeler, who ruled that the US CDC's mandatory mask order is invalid, is called "hero" by some netizens.

However, in a 59-page document, Mizeler ruled that "the issuance of the mask order was beyond the authority of the CDC and did not follow appropriate rulemaking procedures" and considered it "illegal", thus invalidating the mask order. ...

Her ruling, purportedly based on a lawsuit brought by two frequent flyers over the mask order.

The federal government was shocked, where did the "fairy" come from, what kind of operation is this?

White House press secretary Psaki responded at a press conference on the same day that the government was "disappointed" by the ruling and called on people to continue to wear masks.

[As soon as the ruling came out, America was in chaos?

Whether or not they have been vaccinated against the new crown, it is mandatory for passengers to wear masks when using public transportation in or out of the United States.

As soon as the ruling to repeal the mask order came out, the effect was immediately apparent. The US Transportation Security Administration, the four major airlines, and Amtrak all announced the implementation of the judge's ruling that passengers and employees would no longer be required to wear masks in relevant facilities or venues.

Data map: Biden is vaccinated against the new crown.

Some regions have made mandatory to optional, arguing that passengers and employees can choose whether or not to wear a mask.

To add to the confusion, US President Biden, when asked about it, gave an ambiguous answer: "It's up to the Americans themselves."

However, Biden still needs to wear a mask when boarding the presidential plane Air Force One.

The American people started a big debate on this matter and complained wildly. It can be said that some people are happy and some are worried.

When the airline announced that the mask ban was lifted, some cheered the decision, saying it was "finally breathing easier," and others gave it a thumbs up.

An American netizen said: "They (airlines) just announced that the mandatory mask order on flights has been lifted"!

But some people said, "It's easy to breathe without a mask, but then you need a ventilator."

Others worry about children and unvaccinated seniors after the mask ban was lifted.

The author is concerned that the American right-wing media "Fox News" has focused on this matter for two consecutive days.

The day before, it threw a sharp headline: This is a "slap in the face" to the federal government.

"A slap in the face: CDC opposes killing mask mandate, even if Biden relents".

Image source: Screenshot of the Fox News report in the United States.

The next day, "Fox News" was still focusing on it, and the headline changed again:

The headline on Fox News on the 21st was "Prepare for a confrontation: The CDC calls on the Justice Department to take steps to hit back at the judge who repealed the mask order."

From "slap your face" to "turn your face", I have to say that the American media's word game is very cool and humorous!

[Behind the "Donkey and Elephant Contest"]

Mizeler's ruling said that the CDC was "arbitrary" and "capricious", and even if it should be praised for its actions to fight the epidemic, "all courts have the full authority to make such a decision."

The ruling also held that the only remedy for now is to "repeal the mask order across the United States."

Such tough rhetoric brought Mizeller to the fore.

Everything about her was "ripped" upside down.

Mizeller, a former clerk to Supreme Court Justice Clarence Thomas, was appointed to the federal court by former President Trump in late 2020.

At the time of her appointment, she was only 33 years old and was unanimously opposed by Democrats.

She was once rated "unqualified" by the American Bar Association because of her short actual legal practice and "lack of meaningful trial experience."

Some netizens posted a photo of Mizeller and US Supreme Court Justice Thomas.

The U.S. "Capitol Hill" newspaper quoted legal experts as saying that such a ruling shows that Mizeller "didn't understand" even some relevant concepts, let alone fully aware of the impact the judgment would have on the public.

Republicans such as Florida Governor DeSantis, who have historically opposed the federal government's epidemic prevention regulations, praised the ruling.

After a long time of trouble, it is none other than the two parties in the United States who have been politicizing the issue of wearing masks since the outbreak of the epidemic.

Due to the "donkey-elephant dispute", politicians and the media continue to use masks as a political weapon to criticize their opponents.

【The virus is rampant, the future is dangerous】

The U.S. Department of Justice has said it still believes it is necessary to extend the mask order after the CDC has completed its assessment.

The Justice Department has appealed the ruling.

The CDC stated that the mask order is within its legal authority to protect public health, and the agency will continue to perform its duty to protect the public based on the latest scientific research.

The department is closely monitoring the rapid spread of the BA.2 subtype of the new coronavirus Omicron strain in the United States.

Recently, cases of infection with this strain have accounted for more than 85% of new cases of new crowns in the country.

It is because of concerns about the strain that the CDC decided to extend the mask order.

Epidemiologists in the United States believe that the more dangerous is yet to come.

In September, the United States may usher in the peak of the epidemic.

As the only superpower, the new crown epidemic in the United States is difficult to control, which not only restricts economic development, but also reduces the approval rate of President Biden. The politicization of epidemic prevention awareness issues such as wearing masks and vaccinations has also caused further tearing in American society.

Recently, a number of important political figures in the United States have successively announced that they have tested positive for the new crown, such as former US President Barack Obama, House Speaker Nancy Pelosi, Vice President Harris' husband Emhoff and others.

Among them, Pelosi caused controversy due to close contact with many US government officials and staff members such as President Biden, precisely because they did not wear masks when attending official activities.