Questions about timing and motives.. Sisi calls for political dialogue and raises speculation

In a rare call highlighted by the local media, Sisi called for a political dialogue compatible with what he described as building the new republic without clarifying the nature of this dialogue, which raised some speculation about this call at this time and its content. 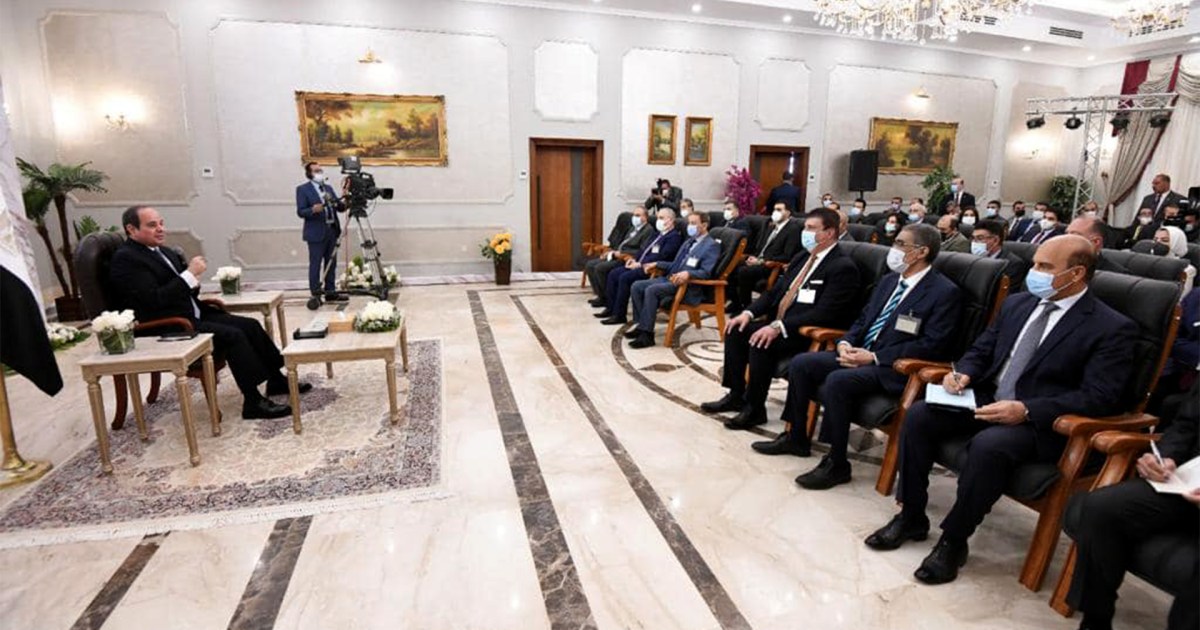 In a rare call highlighted by local media, Egyptian President Abdel Fattah El-Sisi called for a political dialogue in line with what he described as building the new republic, without clarifying the nature of this dialogue, as he only said that he would reveal more details later, which raised some speculation. About launching this call at this time and its content.

El-Sisi said, in an extensive meeting with a group of media professionals and journalists on the sidelines of his visit to the Toshka area in the south of the valley in Aswan Governorate, “I will agree with you that, frankly, we need a political dialogue commensurate with the idea of ​​building or launching the new republic, and I will announce this matter in more details.” In the Egyptian family breakfast.

The Egyptian family breakfast is an annual tradition in which the president attends a group breakfast table and invites a number of representatives of the Egyptian society, to talk about social and economic issues in the country, and review the achievements and challenges, and it is expected that it will be in the middle of this week, according to sources for Al Jazeera Net.

The Egyptian media did not report the details of the expanded dialogue with the media, as the Presidency of the Republic contented itself with broadcasting short statements by Sisi, without conveying the media's questions.

# Sisi says he intends to launch a political dialogue that is compatible with the new republic during the "Egyptian Family" Iftar celebration pic.twitter.com/k6xXpUnbWB

Local media reported Sisi’s call for a political dialogue with wide headlines, but without any details;

No additional information was received, whether by the visual, audio, paper or electronic media, about the nature of this dialogue.

Commenting on Sisi's call, the media figure close to the authority and the current member of parliament, Mostafa Bakri - who was one of the attendees at the meeting - said that President Sisi was one of his priorities, the issue of political reform, he said.

In his program on Sada Al-Balad channel, Bakri added that no one will be excluded from participation, and stressed the launch of a political dialogue that includes parties and national societal forces, in the interest of the national state, without clarifying the source of his information.

Bakri said, "We have longed for such conferences in which the opposition, media professionals and trade unionists speak," adding that we were patient during the last period due to the circumstances the country was going through, without clarifying the nature of those circumstances.

In turn, the announcer, Nashat Al-Daihi, one of the attendees at the meeting, said that the dialogue lasted for more than two hours, and that "the president said, "Ask what you want without hesitation, and this tempted everyone to ask their questions," as he described it.

Al-Daihi added in his program on “ten” channel yesterday, Saturday, that the president talked about everything that goes on in the mind of the citizen, and the questions of the media were at the core, and revolved around what the citizens had in mind, and they had a desire for reassurance, and the main question was about the economy. The economic situation, water security, the impact of the Ukrainian war on Egypt, and how Egypt deals with these files.

In a brief comment on the call for political dialogue, the Egyptian diplomat and politician Mostafa El-Feki said - in press statements - that "Sisi always calls for the establishment of many important meetings, and always opens the door in order to provide the opportunity for such constructive dialogues, to exchange visions for a better future for Egypt." .

The call for political reform sparked controversy on the communication sites, where some spoke of what they described as political and media restrictions and imprisonment of opponents, considering that it is difficult to predict the content of the call for political dialogue and what it is intended for, and who it includes specifically, while others welcomed it because of the urgent need for it.

But the invitation, which seemed unspecified, raised many questions among activists about the timing and meaning of this invitation until it was revealed what it will be at the Egyptian family's upcoming Iftar party.

Those who doubt the truth of the call for dialogue cited what happened during the past few days from the arrest of the media, Safaa Al-Korbaji, following a series of video clips in which she criticized the Egyptian authorities, in addition to the arrest of 3 people from the satirical team of the "Gentleman Al-Ghalaba" page, which presents satirical videos about the high prices on the application. "TikTok", according to human rights pages and websites on social media.

Is the government on the verge of a big thing because of the economic situation, so tweeters expressed their fears about the reason for calling for such a stalled political dialogue since the military coup in the summer of 2013.

It is worth noting that the army statement that Al-Sisi delivered when he was defense minister in July 2013, which included the dismissal of the elected civilian president, Mohamed Morsi, spoke at the time of a road map for the transitional phase that included the formation of a higher committee for national reconciliation, and since that time the committee has not been formed and reconciliation has not taken place.

Recently, anger escalated in Egypt for several reasons, the most prominent of which was a surge in food prices that the government attributed to the crisis of the Russian war on Ukraine. The local currency (the pound) witnessed a decline of more than 17% of its value, and this affected the purchasing power of many citizens.

On the tenth of this April, the Central Agency for Public Mobilization and Statistics announced that annual inflation rose last March to 12.1%, compared to 4.8% for the same month the previous year, and consumer prices rose last month on a monthly basis by 2.4%.

Two days ago, the Director of the International Monetary Fund, Kristalina Georgieva, confirmed that the conditions of the Egyptian economy are deteriorating, and that the country needs financial stability in addition to continuing reforms, adding that "the Fund had a successful experience with Egypt in the previous program, but now the conditions surrounding the Egyptian economy are getting worse." .

The Economist magazine also published an article in which it said that despite talking about the importance of business in Egypt, the army is holding on to everything it wants, and the authorities are stifling businessmen and the private sector, which has caused the economy to worsen and to fail to build an industrial base and curb the arrival of foreign investors.

Al-Sisi’s call to launch a political dialogue comes after speculations and previous steps in a related context, which included the release of some activists and prisoners of conscience during the past year, as well as recent news of the release of dozens of detainees within hours.

In statements to Al-Jazeera Net in July 2021, the head of the Egyptian (liberal) Reform and Development Party, Mohamed Anwar El-Sadat, said that these recent releases come within the framework of what he described as the new general trend of the state, noting that "there will be a great opening and reforms during the coming period." In the file of political rights and freedoms, this will happen gradually and gradually," he said.

Two months later, in September 2021, the Egyptian government announced a "human rights strategy" that relies on 4 main axes, which are civil and political rights, economic, social and cultural rights, the rights of women, children, people with disabilities, youth and the elderly, and education and capacity-building in human rights.

At the time, Sisi considered the launch of the strategy a bright spot in Egypt's history, and a serious step towards advancing human rights in the country, declaring 2022 "the year of civil society."

Al-Arabiya: Al-Sisi announces the launch of a comprehensive political dialogue during the coming

period..is he still a politician in Egypt?..will they also sit behind you and turn your back?!

You couldn't stand a video of a female journalist outside the political context... Will you tolerate a comprehensive political dialogue?!

Launching a comprehensive political dialogue that is

(2) the headquarters of the cartoonist and security parties?

The attack on the government

- the news that hints at bankruptcy

Sisi: We need a comprehensive political dialogue about the new republic pic.twitter.com/9ONlq70qLj

No, we just need a comprehensive political dialogue!!!