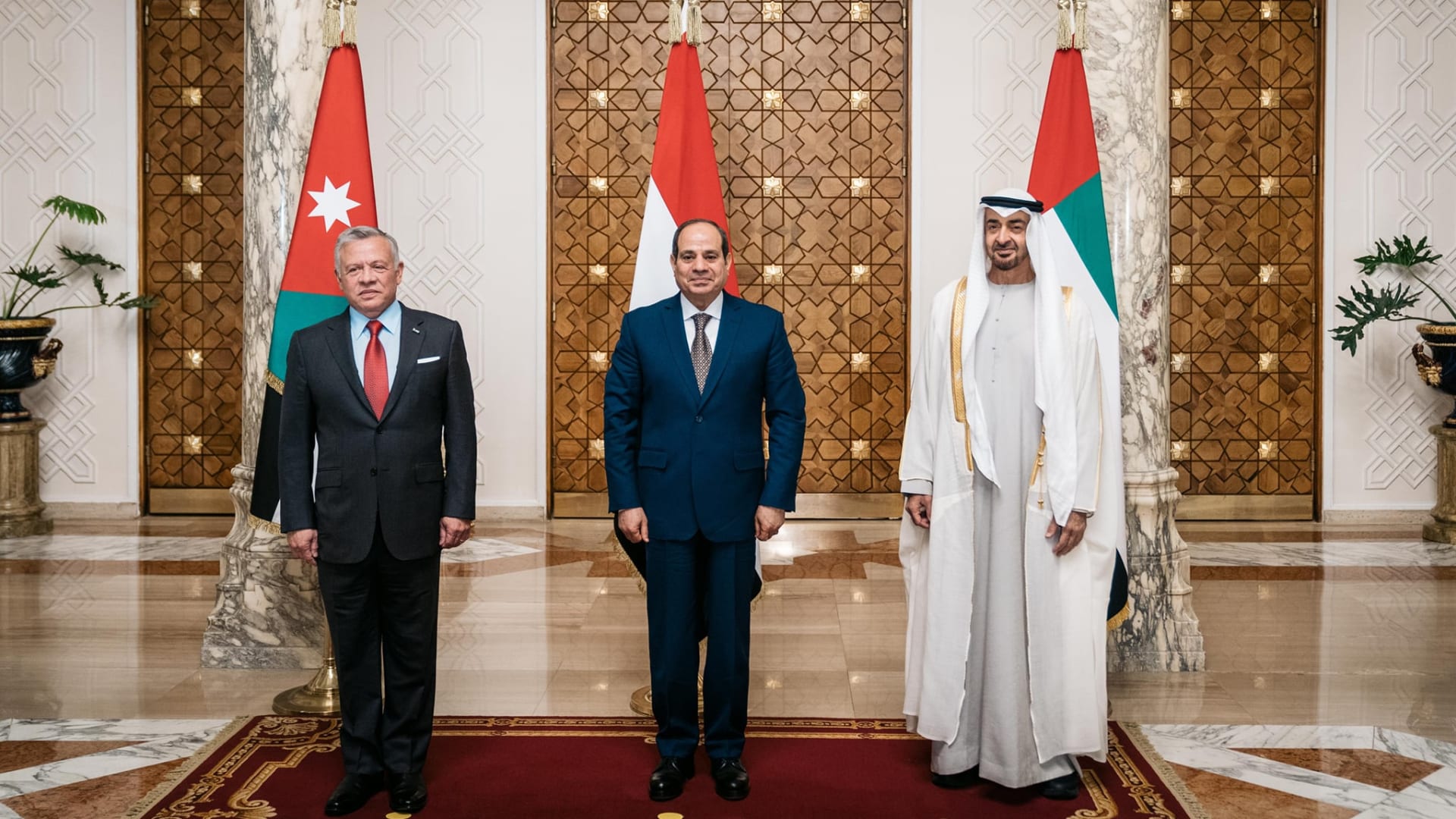 In Cairo, they reviewed the latest regional and international developments

His Highness Sheikh Mohamed bin Zayed Al Nahyan, Crown Prince of Abu Dhabi and Deputy Supreme Commander of the Armed Forces, Egyptian President Abdel Fattah Al-Sisi, and King Abdullah II bin Al Hussein of Jordan discussed today in Cairo brotherly relations and various aspects of cooperation and joint work and ways to develop and strengthen them for the benefit of their brotherly countries and peoples.

At the beginning of the meeting, His Highness Sheikh Mohamed bin Zayed Al Nahyan and President Abdel Fattah Al-Sisi congratulated King Abdullah II on the success of his recent surgery, wishing him continued good health, while His Majesty expressed his thanks and appreciation for the good brotherly feelings expressed by His Highness and the Egyptian President, wishing them health and happiness. .

The leaders - in the presence of His Highness Sheikh Mansour bin Zayed Al Nahyan, Deputy Prime Minister and Minister of Presidential Affairs - exchanged congratulations on the occasion of the blessed month of Ramadan, praying to God Almighty to prevail in goodness, stability and peace for the Arab and Islamic nations and the peoples of the whole world.

The meeting dealt with strengthening joint Arab action and the importance of mutual coordination in light of the challenges and crises that the Arab region is witnessing and threatening its security and stability.

The leaders touched on the developments taking place in the city of Jerusalem and the blessed Al-Aqsa Mosque, stressing the need to stop any practices that violate the sanctity of Al-Aqsa Mosque and to change the current situation, in addition to avoiding escalation and calming the situation.

The leaders stressed the region's need for peace, stability and joint cooperation in order to activate the paths of peace and development and push its wheels at various levels in order to achieve the aspirations of the peoples of the region for progress and prosperity.

During their fraternal meeting, the leaders reviewed a number of issues and the latest regional and international developments and exchanged views on them, especially the war in Ukraine and its humanitarian and economic repercussions. They called on all concerned parties to exert maximum efforts to settle the conflict through giving priority to diplomacy and through dialogue and negotiations to restore security and stability in the region. They expressed their concern about the worsening humanitarian situation accompanying the crisis and the need to address it by reaching an urgent political solution.

His Highness Sheikh Mohamed bin Zayed Al Nahyan stressed that the continuation of Arab consultation and coordination is at the heart of the UAE's orientation and its firm belief that joint Arab action in issues of security, stability and prosperity represents the basis for the region's success in facing the challenges surrounding it, as well as building on the available opportunities. However, the UAE continues its efforts to enhance Arab cooperation for the good of the countries and peoples of the region.

For his part, the Egyptian President welcomed His Highness Sheikh Mohamed bin Zayed Al Nahyan and King Abdullah II as dear guests of his country, expressing his appreciation for the close and historical relations that bring together the three countries at the official and popular levels. He affirmed Egypt's aspiration to strengthen constructive cooperation with the UAE and Jordan and start Together towards broad horizons of strategic partnership that establishes extended relations and achieves common interests and is in the interest of strengthening joint Arab action, especially in light of the great challenges the region is witnessing as well as the economic and social crises resulting from multiple regional and international developments.