Sofía de Borbón, the fifteen-year-old Infanta who does not act as a 'second'

Finally, after three months of absence, Leonor and Sofía publicly reappeared this Easter. Not at Easter Sunday mass in Palma, as is tradition, but... 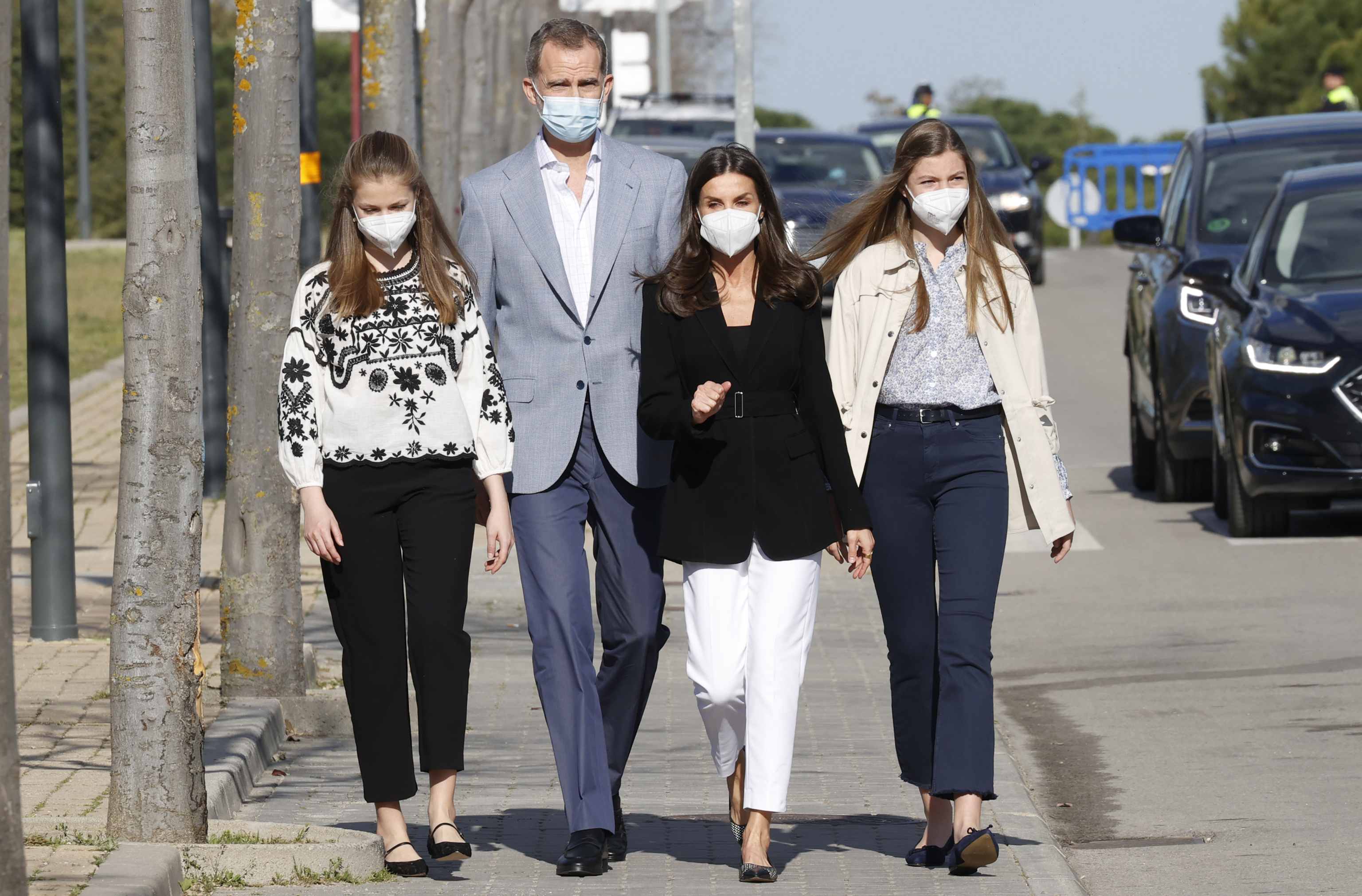 Finally, after three months of absence, Leonor and Sofía publicly reappeared this Easter.

Not at Mass on Easter Sunday in Palma, as is tradition, but visiting a reception center for Ukrainian refugees in Pozuelo con los Reyes on Saturday.

We hadn't seen Leonor, who had arrived from Wales that Holy Thursday since she presided over the Princess of Asturias Awards in October, accompanied by her and Sofia's parents.

The Princess captured the media attention for her reappearance and also for that white blouse with black embroidery that she wore, an unequivocal nod to Ukraine that her mother also previously made.

Her sister, perhaps in order not to overshadow her, wore a very sober look: jeans, a flowered blouse and a beige jacket.

, has not been seen since, contrary to expectations,

her institutional agenda has been empty since Leonor left for Wales

, despite the fact that in April 2020 she He premiered in his first official act, reading a part of

in a duet with his sister telematically .

Zarzuela considered giving it greater prominence in the absence of Leonor.

"It will be seen, because the Infanta has to focus on her studies," sources from the palace assured LOC.

In the end it did not happen, and Sofía had a single stellar moment, on October 12, when she went with her parents to the parade of the National Holiday.

It was her first act without her, Leonor, and she swept it away, wearing a miniskirt dress and rope ballerinas, so much so that even the European press praised her poise and her flattering model.

Inexplicably, except days after her at the Princess of Asturias Awards,

we never saw her hair again

According to a character close to the monarchs, "given how small the royal family is today, it

is positive that Sofia is an important asset for the Crown

. But there is a risk that she will

monopolize too much prominence with Leonor out

, because it will be his sister who will reign and this could cause conflicts.

In addition, she has not yet turned 15, the age at which Leonor starred in her first solo act ".

dynastic second sons are a problem in many European monarchies

, because with a rather blurred role in general, they are torn between the sacrifice of conditioning their lives by serving the Crown without the privileges of the throne, and they end up displaced when the heir marries and has his own family.

This has happened to the infantas Elena and Cristina, who unlike their niece Sofía,

had great prominence especially when Don Felipe was studying abroad

Already older and eliminated from the royal family, far from being a support they have become a stone in the King's shoe.

The Kings with their daughters, last week in Pozuelo, where they visited a refugee center. GTRES

In the rest of Europe examples proliferate.

This is the case of Harry and Megan in the United Kingdom, who gave up their

, or their uncle Prince Andrew, implicated in the Epstein scandal.

is the princess of scandals, because after the suicide of her ex-husband, Ari Behn, she threatens to marry a shaman.

She has also renounced her institutional role, arguing that with the allowance she received of 16,000 euros a year, she could not live comfortably.

Not to mention Laurent, brother of the Belgian monarch, who was prosecuted for fraud and was stripped of part of his assignment due to the diplomatic conflicts he was involved in.

who, it is said, settled in Paris out of

jealousy towards his brother Frederick

He has even publicly complained about his situation.

"The role of spare parts (seconds) within royal houses is not defined and this causes great frustration," he said.

The Infanta Sofía with her father, in the parade of the National Holiday. GTRES

A problem that at the moment does not affect Leonor and Sofía, because apart from being still teenagers and being very close, they have had the

She has also taken care that

Sofía does not feel marginalized

and likes to compare them to the crew of a ship, the captain is Leonor, but her role is also very important.

In 2021 for the first time they have separated their destinies, since Leonor left in August to attend high school at Atlantic College in Wales.

She before her starred in her first official solo act in March for the 30th anniversary of the Cervantes Institute.

This Wednesday she again participated alone and without a mask in a conference on youth and cybersecurity at the Julio Verne Institute in Leganés.

Sofía, who is in the third year of ESO in Santa María de Los Rosales, seems to

and may even receive

But nothing is written about its

that, for the moment, she has limited herself to seconding Leonor a step behind, since Zarzuela has ruled out until now that in the absence of her sister she will carve out her own role as Infanta.

Will her 15th birthday be her starting point?