Is Macron's re-election bid for French president in sight? 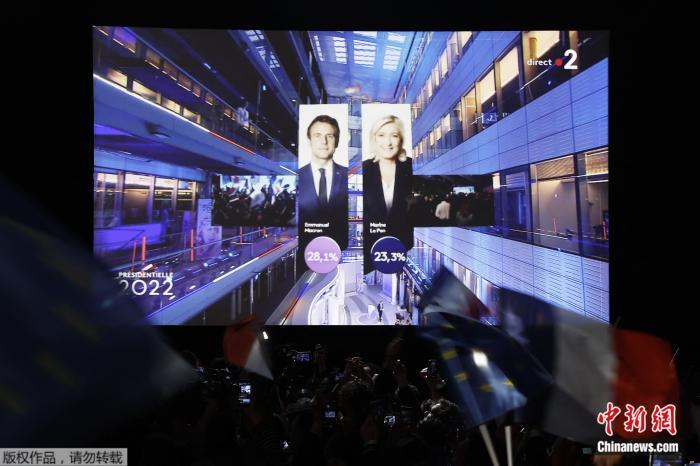 (International Observation) Is Macron's re-election as French president in sight?

The 2022 French presidential election has entered a "decisive battle" stage. Will French President Emmanuel Macron, who is running for re-election, maintain his poll lead until the end and finally defeat the far-right party "National League" candidate Marine Le Pen, thus opening the door The new presidential term is still the election issue that the outside world is most concerned about.

On April 10, local time, an electronic screen in Paris, France, showed the preliminary results of the first round of voting in the 2022 French presidential election.

Macron and Le Pen, the two candidates who won the first round of voting on the 10th and participated in the second round of voting, launched their final campaign canvassing activities on the 22nd.

Macron and Le Pen's final campaign schedules on the 22nd were more cautious, and both chose locations with more public support.

Macron plans to travel to Figeac, a town in the Lot department in southwestern France, where he garnered a lot of support when he ran for president five years ago.

Le Pen came to Étaples in the northern French province of Pas-de-Calais that day, the town where she led the first round of the presidential election.

In addition, the two also participated in a TV talk show on the same day.

Macron and Le Pen are also in a final battle to mobilize supporters.

Macron's entourage revealed that the purpose of choosing Fiac is to "accelerate the mobilization of voters" and avoid the "loss" of voter enthusiasm.

Macron had earlier reminded voters that the outcome of the election was uncertain and that his supporters had to "redouble their efforts".

Le Pen claimed that he still had a chance to win, calling on voters to "mobilize".

Macron is seeking more support from centre-left and far-left voters in his final campaign.

On the 21st, he also went to Seine-Saint-Denis in the Paris region to participate in election activities and communicate with the local people.

Seine-Saint-Denis has a large number of voters in the first round of voting for the far-left party "Indomitable France" presidential candidate Mélenchon.

However, Le Pen still regards consolidating the "vote position" of the far-right camp as one of the main tasks of the final campaign.

Her activities in the last two days have been concentrated in the Haute France region.

Macron won 25 percent of the vote in the region's first round.

Outside analysts generally believe that Le Pen's performance in the presidential election televised debate held on the evening of the 20th was not as good as Macron's.

On the contrary, Macron, as the current president, has appeared to be more "offensive" in the debate many times, while Le Pen, as a challenger, has shown more "defensiveness".

On the issue of purchasing power, which the French people are most concerned about, Le Pen was also considered to have not affected Macron more in the debate, and Macron was not on the "defensive" on this issue, asking why Le Pen was in parliament. Vote against official plans to cap electricity prices.

Polls show that most respondents think Macron's speech is more convincing than Le Pen in the debate.

Although Le Pen is seen as doing better than her televised debate with Macron in 2017, it is still difficult for her to close the polling gap with Macron through the debate.

Polls also show that the public's intuitive impression of Macron and Le Pen through this debate has not materially changed.

An Ipsos poll released on the 21st showed that Macron's approval rating in the second round of voting has risen to 57.5%, and Le Pen's approval rate is 42.5%.

The gap between Macron and Le Pen has widened to nearly 15 points, after narrowing to 8 points in April.

Le Pen won't be easy to win if the polls go as they are.

The biggest uncertainty in Macron's election

For Macron, the biggest uncertainty facing him is how center-left and far-left voters will choose in the second round.

Center-left and far-left voters will have a major impact on the direction of the election.

Ifop pollster Forgay made it clear that left-wing voters will dominate the outcome of the second round.

While a third of Melenchon's supporters want Macron to win the election, as many as half say they still haven't decided how to vote, and a significant number of them may end up choosing to abstain, an Ipsos poll shows. .

If the number of them abstaining or supporting Le Pen is higher than expected, the election between Macron and Le Pen is likely to be stalemate, and it is obviously not good news for Macron.

In addition, many center-left and far-left voters expressed their disappointment with Macron's economic and social policies through the French media.

At present, against the background of rising concerns about French people's livelihood and economic issues, whether Macron's measures to deal with the level of purchasing power are effective and the reform of the retirement system he insists on promoting are all affecting the sensitive nerves of voters at any time.

In the final moments of the presidential election, Macron's camp dare not take it lightly.

"Victory is in sight" seems to be too early to define Macron's campaign.

Most commentators believe that Macron still has to do his best in the final sprint of the campaign, and if he eventually wins, it will be difficult to replicate his 2017 presidential victory over Le Pen.