In this keynote speech on "future", what important messages did Xi Jinping convey?

Current Affairs News Eye 丨 In this keynote speech on the "future", what important information did Xi Jinping convey?   On April 21, President Xi Jinping delivered a keynote speech via video at the opening ceremony of the Boao Forum for Asia Annual Conference 2022. This is the sixth time he has attended the forum's annual meeting, and the second year in a row since the outbreak of the new crown pn 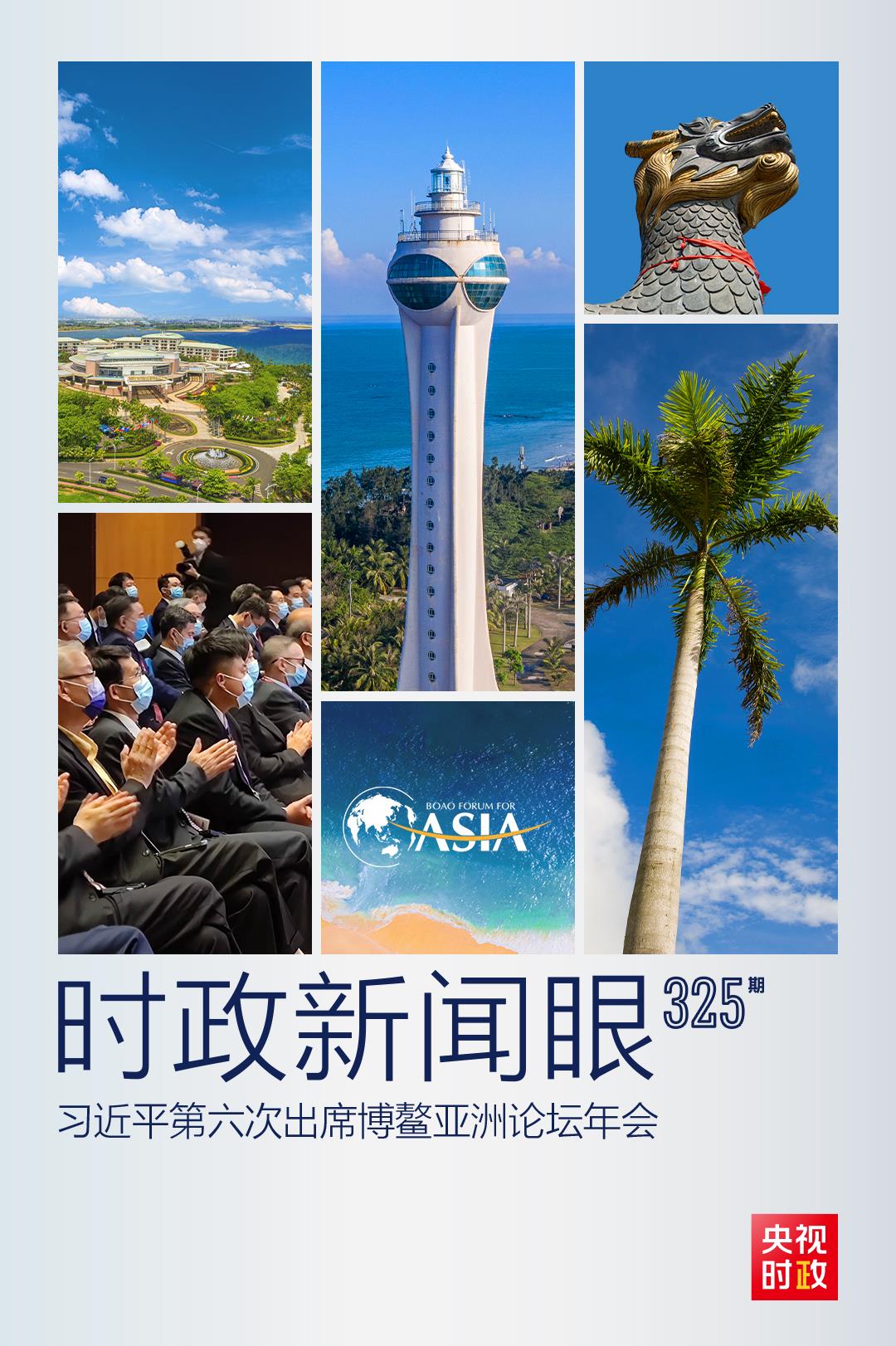 Current Affairs News Eye 丨 In this keynote speech on the "future", what important information did Xi Jinping convey?

On April 21, President Xi Jinping delivered a keynote speech via video at the opening ceremony of the Boao Forum for Asia Annual Conference 2022.

This is the sixth time he has attended the forum's annual meeting, and the second year in a row since the outbreak of the new crown pneumonia epidemic.

Facing the "question of the future" of where human society should go, what important messages did President Xi convey in this speech?

On the morning of April 21, he and old and new friends gathered again in the "cloud" to attend the Boao Forum for Asia Annual Conference 2022.

△ Outside the Boao Forum for Asia International Conference Center, it is full of vitality.

This is the sixth time Xi Jinping has attended the Boao Forum for Asia Annual Conference.

In 2010, when he was vice-president of China, he attended the opening ceremony of the annual meeting of the forum for the first time and delivered a keynote speech entitled "Joining Hands to Promote Green Development and Sustainable Development in Asia".

Since then, in 2013, 2015, 2018, 2021 and this year, Xi Jinping attended the opening ceremony of the annual meeting of the forum and delivered a keynote speech as the president of the country.

"Current Affairs News Eye" found that, from "Jointly Create a Bright Future for Asia and the World" in 2013, "Towards a Community of Shared Future to Create a New Future for Asia" in 2015, to "Opening Up, Creating Prosperity, Innovation and Leading the Future" in 2018, Together in the same boat to overcome difficulties, destiny and create the future", and this year "Join Hands to Meet Challenges, Cooperate to Create the Future", the word "future" has appeared in the title of President Xi's keynote speech at every Boao Forum for Asia annual meeting since 2013 middle.

After entering the third decade of the 21st century, the world has always been shrouded in the haze of the epidemic.

At last year's forum annual meeting, President Xi said, "Where should human society go? What kind of future should we create for future generations? For this major proposition, we must proceed from the common interests of mankind and take responsibility for it. Responsibility to make smart choices.”

△The venue before the opening ceremony of the Boao Forum for Asia Annual Conference 2022.

The theme of this year's forum annual meeting is "epidemic and the world: jointly promoting global development and building a common future".

How President Xi answered "the question of the future" in his keynote speech at the opening ceremony has attracted wide attention both at home and abroad.

From the perspective of Current Affairs News Eye, this important speech conveyed important information on at least four levels.

△The national flags of many countries fluttered outside the Boao Forum for Asia International Conference Center.

Great changes unseen in a century are unfolding to us scene by scene.

The current international situation can be described as "the house leaks and it rains overnight, and the ship is late and hits the wind".

In his keynote speech, President Xi Jinping analyzed multiple challenges in this way: "Humanity has not yet stepped out of the haze of the epidemic in the century, and faces new traditional security risks; the global economic recovery is still fragile and weak, and the contradictions of the development gap are superimposed; climate change and other governance deficits have not yet Filling, digital governance and other new topics are before us again.”

As for China, since March this year, the unexpected outbreak of the epidemic and the complicated evolution of the situation in Ukraine have had an impact on the stable recovery of the economy, and market expectations have fluctuated greatly.

Faced with this situation, how should we look?

From a historical perspective, no difficulties and twists and turns can stop the wheel of history.

President Xi said in his keynote speech: "Human history tells us that the more difficult the time, the more we must strengthen our confidence."

President Xi said: "Contradiction is not terrible, it is the contradiction that drives the progress of human society."

△ After Xi Jinping delivered the keynote speech, there was applause at the scene.

In special times, confidence is more precious than gold.

President Xi pointed out, "In the face of numerous challenges, we must not lose confidence and hesitate to retreat, but we must strengthen our confidence and advance bravely."

At a critical moment, China injects confidence into the world.

President Xi said that the fundamentals of China's economy with strong resilience, ample potential, wide room for manoeuvre and long-term improvement will not change.

He reiterated: "No matter what changes take place in the world, China's confidence and will in reform and opening up will not be shaken."

At the Boao Forum for Asia Annual Conference, President Xi proposed a global security initiative for the first time.

This is another international public good provided by China.

This initiative is not only a long-term thinking, but also a current need.

On March 28, 2015, President Xi emphasized at the annual meeting of the Boao Forum for Asia: "Towards a community with a shared future, we must adhere to the realization of common, comprehensive, cooperative and sustainable security."

The current intensifying crisis in Ukraine, in the final analysis, stems from the security imbalance in Europe.

Twenty days ago, when meeting with EU leaders, President Xi pointed out that the root cause of the Ukrainian crisis lies in the regional security contradictions accumulated in Europe for a long time, and the fundamental solution is to accommodate the legitimate security concerns of all parties concerned.

At the annual meeting of the Boao Forum for Asia seven years ago, President Xi emphasized that "every country's reasonable security concerns should be respected and guaranteed", "the historical latitude and reality of Asian security issues should be taken into consideration", and "peaceful ways to resolve disputes”… These propositions apply not only to Asian security issues, but also to all countries.

Since the Ukrainian crisis, China has always been committed to promoting peace talks and advocates building a balanced, effective and sustainable European security framework.

President Xi solemnly put forward the global security initiative at the Boao Forum for Asia Annual Conference this time, and it is aimed at promoting the world's safety and security, and promoting the building of a security community that is closely related to every country and everyone.

Opening up: "We must persist in building an open world economy"

From April 10th to 13th this year, just before the Boao Forum for Asia Annual Conference, Xi Jinping made a special trip to Hainan for inspection, demanding to speed up the construction of a free trade port with Chinese characteristics with world influence, and make Hainan a model of China's reform and opening up in the new era. .

At the forum's annual meeting, President Xi Jinping emphasized that China will expand high-level opening-up, implement the negative list for foreign investment access in depth, expand the scope of encouraging foreign investment, optimize foreign investment promotion services, and add comprehensive pilots for expanding the opening up of the service industry.

From solidly advancing the construction of a free trade pilot zone and Hainan Free Trade Port, fully implementing the Regional Comprehensive Economic Partnership Agreement, and actively promoting high-quality joint construction of the "Belt and Road", President Xi once again conveyed that "China's open door will not Close it, it will only open up” is a clear signal.

△Israeli President Herzog attended the opening ceremony of the annual meeting by video and delivered a speech.

Whether it is an inspection in Hainan or the annual meeting of the Boao Forum for Asia, the tide of the times can always be heard.

Four years ago at the 2018 Boao Forum for Asia Annual Conference, President Xi said: "China's 40 years of reform and opening up have provided people with many precious inspirations, the most important of which is that if a country and a nation want to rejuvenate, they must We must advance in the logic of historical progress and develop in the trend of the times.”

To this day, this remains the norm for development.

△ Mongolian President Khuri Sukh attended the opening ceremony of the annual meeting by video and delivered a speech.

On January 17 this year, President Xi firmly stated in the video conference of the World Economic Forum, "Although there have been many adverse currents and rapids, the direction of economic globalization has never changed and will not change. All countries in the world must adhere to genuine multilateralism, We insist on demolishing walls without building walls, opening up without isolation, integration without decoupling, and promoting the building of an open world economy."

At the Boao Forum for Asia Annual Conference, President Xi re-emphasized, "We must persist in building an open world economy and grasp the general trend of economic globalization."

△On April 20, 2022, at the press center of the 2022 annual meeting of the Boao Forum for Asia, journalists from many countries have settled in.

President Xi Jinping made two metaphors in this keynote speech.

One is the metaphor of "big ship".

"All countries in the world are riding on a big ship with a shared destiny. To cross the stormy seas and sail to a bright future, they must work together in the same boat. It is unacceptable to try to throw anyone into the sea."

The second is the metaphor of "machine".

Who is trying to "throw" and advocate "demolition"?

A discerning person should understand at a glance.

At the 2013 annual meeting of the Boao Forum for Asia, President Xi pointed out that we should "make our global village a big stage for common development, not an arena for wrestling with each other, let alone mess up a region and even the world for one's own sake. ".

At the 2015 annual meeting, he once again pointed out that he "opposes messing up the regional situation for one's own sake".

At this year's annual meeting, he emphasized that "any country, big or small, strong or weak, whether within or outside the region, should add luster to Asia without causing chaos." Show the appearance of a great country."

Out of the fog, towards the light.

From conveying confidence and putting forward proposals, to declaring openness and analysing minds, the voice from China's Boao deserves serious listening from the world.