Fujian Qingliu: a place worth investing in Taiwanese businessmen 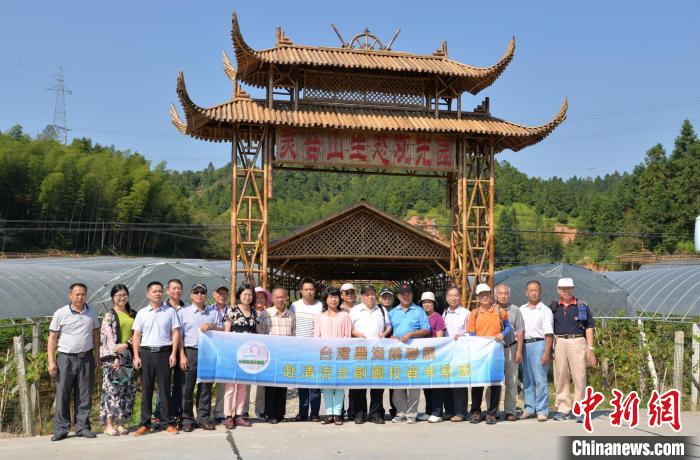 (Forge ahead in a new journey and make contributions to a new era and a new look in old districts) Fujian Qingliu: A Place Worth Investing for Taiwanese Businessmen

Qingliu County is located in the western part of Fujian Province. Qingliu was one of the 22 counties in the Central Soviet Region during the Second Civil Revolutionary War.

In recent years, Qingliu County has given full play to its advantages in human resources to Taiwan, relying on the platform of the Taiwan Farmers Pioneer Park, to implement the same treatment for Taiwan compatriots and Taiwanese businessmen, to promote cross-strait economic and cultural exchanges, and to advance cross-strait agricultural cooperation.

The county with the most Taiwanese companies in Sanming

In 1988, the Chinese Academy of Sciences found that the "Qingliu people" and Taiwan's "Zuozhen people" belonged to Homo sapiens in the late Paleolithic period, proving that the two sides of the Taiwan Strait had "same roots and same ancestors" more than 10,000 years ago.

This historical origin has laid the foundation for Taiwanese businessmen to come to Qingliu to invest and develop their business together.

According to Luo Shanghua, deputy director of the Management Committee of Qingliu Taiwan Farmers Pioneer Park, Qingliu's climate and environment is similar to that of Miaoli County, Taiwan, and it is very suitable for Taiwanese businessmen to develop agriculture.

After several years of preparation, in February 2019, he founded Fujian Xinzhan Agricultural Development Co., Ltd. in Qingliu County, planning to build a high-yield, high-quality, high-efficiency Chinese herbal medicine and spice planting base of 200 acres in Songxi Town of the county, and supporting the construction of film seedlings Greenhouses, intelligent greenhouses, management rooms and base supporting trenches, canals, roads, drip irrigation systems and other facilities.

"The Qingliu County government has given a lot of preferential support to Taiwanese businessmen, and the ecological environment here is very good." Now, Xie Menglin's family has relocated and lives in Qingliu, while the children are studying in the county.

Qingliu became the county where Sanming introduced the most Taiwan-funded enterprises.

When the cherry blossoms bloom in February and March every year, it attracts tourists from all over the country and has become a well-known Internet celebrity check-in place in Fujian.

At the same time, the park regularly holds bank-enterprise matchmaking meetings to assist Taiwanese enterprises in obtaining corporate credit, small-sum guarantees and other loans, and apply for subsidy funds to effectively alleviate the problem of insufficient liquidity of Taiwanese enterprises.

Qingliu is located in a mountainous area, and there are some shortcomings in transportation and logistics objectively.

Qingliu County has also established and improved the system of party and government leaders and heads of relevant departments to contact Taiwanese enterprises, regularly visit Taiwanese businessmen, understand existing problems, establish a ledger, and coordinate and solve them in a timely manner.

Qingliu Taichuang Garden is a high-quality orchid planting base.

Wu Senyuan is one of the early Taiwanese businessmen who settled in Qingliu. In 2009, he founded Senyuan Lanhui Biotechnology Co., Ltd. in Qingliu. Major categories of precious orchids, the finished orchids are sold to the European market and Southeast Asian countries such as Thailand and Vietnam.

During the development process, Wu Senyuan explored a new model of orchid tissue culture called "laundry and vegetable washing", which changed the traditional long-term soaking method into three-process cleaning, which greatly reduced the damage to the female parent, and the success rate of cutting buds increased from Less than 10% increased to about 80%.

At present, Senyuan Lanhui Biotechnology Co., Ltd. has an annual tissue culture production capacity of 6 million seedlings, and has become the largest high-quality national orchid breeding center in mainland China and a benchmark for the integrated development of Qingtai and Taiwan.

Since 2021, Qingliu has continued to carry out agricultural technical cooperation with Taiwan, introducing 11 new varieties such as chamomile and wild rose from Taiwan, and 3 new technologies such as central feeding, central egg collection, and central manure production, and demonstration and promotion of 700 acres.

A training course for the integration and revitalization of rural industries in Fujian and Taiwan was also held locally, and Taiwan agricultural experts and scholars were invited to give classroom and on-site teaching, and cultivated a group of modern agricultural producers who understand technology, know how to operate, and can demonstrate.

In the Oriental Beauty Tea Base in Laifang Town, the green sea is full of waves, and the tea leaves are more green and full of vitality under the sun.

The investors of this tea garden are brothers Deng Guoquan and Deng Guoguang from Miaoli County, Taiwan.

Brothers Deng Guoquan and Deng Guoguang have been making tea with their father for decades since they were young.

In 2011, they founded two tea production and processing companies in Laifang Town, driving the surrounding villagers to develop the tea industry together.

In 2017, Wu Xuanyi, a local camellia planter, saw the planting techniques of the brothers Deng Guoguang.

Therefore, the three hit it off and established Sanming Yuanzhen Agricultural Development Co., Ltd. to interplant Oriental Beauty Tea in Camellia Oil Fields, and introduce professional equipment and extend the industrial chain to rough-process the spring tea and autumn tea of ​​Oriental Beauty Tea into matcha, which is sold to Businesses that need matcha ingredients.

"This year's tea growth is gratifying. In the spring season alone, tens of thousands of catties of matcha are produced, and the output value exceeds one million yuan." Deng Guoguang said.

The "strait combination" promotes complementary advantages and strong alliances, and promotes the deep integration of Qingtai's agricultural industry to become better and stronger.

According to the staff of Qingliu Taiwan Farmers Pioneer Park Management Committee, there are countless examples of such cooperation promoting development in Qingliu. The number of cross-strait joint ventures in the park has now reached 70%, forming a "Qingliu model" of integrated development between the two sides.