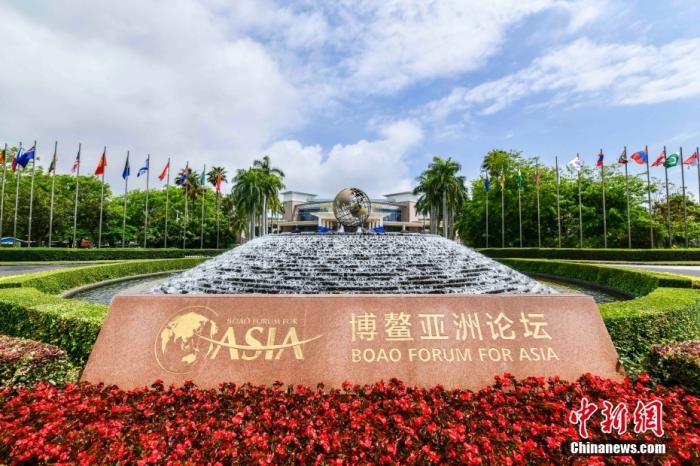 (A Closer Look at China) Boao "Watching the Tide", why did Xi Jinping first mention the global security initiative here?

"All countries in the world are riding on a big ship with a shared destiny. If they want to cross the stormy waves and sail to a bright future, they must help each other. It is unacceptable to try to throw anyone into the sea." Chinese President Xi Jinping said at the Boao Forum for Asia 2022 on the 21st Said at the opening ceremony.

During the Grain Rain season, the annual "Boao Time" opens as scheduled.

When global challenges are coming one after another, the world will once again focus on Boao, China.

At this moment, the "sea" and "waves" in the context of this seaside town have more metaphors for reality.

Xi Jinping once pointed out that in the turbulent waves of the global crisis, countries are not riding on more than 190 small boats, but on a big boat with a shared destiny.

As he said, facts have repeatedly proved that on this big ship, mankind has long been an inseparable security community. In the face of the tide of a century of changes, how should mankind face the "waves"?

In his speech at the opening ceremony, Xi Jinping stated China's proposition - a global security initiative.

Observers here pointed out that this initiative, which was proposed for the first time, starts with "persistence" and "opposes", and connects the principles of security concept, establishment of security structure, and settlement of differences and disputes, and expresses a clear Chinese attitude.

Why bring it up at this time?

Today, mankind has not yet come out of the haze of the new crown pneumonia epidemic, the Ukraine crisis has followed one after another, and the world is facing new security risks.

In the eyes of the outside world, China's proposed global security initiative at this time is a direct response to the ever-increasing security issues, and has distinct practical significance.

Against the reality of emerging regional security crises, in the global security initiative, "opposing the establishment of one's own security on the basis of other countries' insecurity" has drawn particular attention from the outside world.

It is not difficult to find that the pursuit of absolute security for oneself at the expense of harming the security of other countries and the expansion of military groups to ensure regional security is a lesson from the past.

In the case of NATO's five consecutive rounds of eastward expansion, people have repeatedly heard a sentence: "Have you ever thought about the consequences of forcing a big country into the Jedi?"

"Under the current international situation, whether the international community can implement the global security initiative is a matter of world peace and development." Guo Yanjun, director of the Institute of Asian Studies at the China Foreign Affairs University, pointed out that China reiterated the principle of indivisibility of security at the critical moment of the Ukraine crisis, stressing that The common, comprehensive, cooperative and sustainable security concept is a positive response to the long-term view of closed and exclusive security held by individual countries.

In fact, it is not uncommon for differences and disputes between countries to exist, and the key lies in the way of handling and solving problems.

Through the Global Security Initiative, China has clearly expressed its "persistence" and "opposition" - insisting on peaceful solutions through dialogue and consultation, not adopting double standards, and opposing the abuse of unilateral sanctions and "long-arm jurisdiction".

"Faced with the intensified geopolitical competition in the world and the increased possibility of conflicts between countries, China proposed a global security initiative to systematically explain the solution to world security problems." Liu Qing, vice president of the China Institute of International Studies, said that China's initiative The concepts and principles provide the possibility to solve related problems, and also highlight the key role of the "ballast stone" of the world peace ark.

On April 21, the opening ceremony of the Boao Forum for Asia Annual Conference 2022 was held in Boao, Hainan.

Why bring it up here?

Boao Forum for Asia, which has gone through 20 years, is based in Asia and faces the world.

During the "Boao Time" every year, politicians, experts and scholars from all over the world gather here to explore solutions to regional and even global problems in small towns on the coast of the South China Sea.

China's plan in "Boao Time" has always attracted much attention. Xi Jinping has expressed China's proposition at the Boao Forum six times, and "peace" and "security" are always the key words.

"Peace is like air and sunshine, benefiting without realizing it, and losing it is hard to keep."

In April 2013, at the beginning of his tenure as head of state, Xi Jinping delivered a keynote speech at the Boao Annual Conference, during which he mentioned "peace" more than ten times, and emphasized the importance of "peace" using air and sunshine as an example.

Since then, whether on the occasion of the 70th anniversary of the victory of the World Anti-Fascist War or when globalization has come to a crossroads, every time Xi Jinping has stepped on the Boao Forum, he has emphasized the importance of peace and security to regional development.

As he said, the Asian people have gone through hot and cold wars and vicissitudes of life. They know that peace is precious and that development is hard-won.

Today, global security initiatives that embody Chinese wisdom have been systematically put forward, and they have attracted much attention at a time of uncertainty.

"Through Boao, an important occasion based in Asia and radiating the world, the global security initiative proposed by China can better introduce Asian values ​​and propositions to the world, and lead the world to regain the norms of peaceful exchanges between countries." Guo Yanjun analyzed, " This initiative echoes the global development initiative proposed by President Xi Jinping last year, and charts the course for global development and security issues."

Not only that, the global security initiative proposed in Boao has more practical considerations.

In the eyes of analysts, the U.S. "Indo-Pacific strategy" is becoming synonymous with bloc politics. From strengthening the "Five Eyes Alliance" to peddling the "quadlateral mechanism", piecing together a trilateral security partnership, and tightening bilateral military alliances, regional The difficult situation of peaceful development is facing external challenges.

"In the past few decades, the successful code of the 'Asian Miracle' has been regional cooperation. Asian countries need to strengthen the existing security cooperation mechanism and jointly maintain peace and security." Liu Qing pointed out that in the face of the use of Cold War mentality and bloc politics to undermine Asian cooperation Asia refuses to be a chessboard for great powers to play against, and Asian countries are by no means pawns in the confrontation between great powers.

Looking at Asia in Boao and the world in Asia, in the face of changes in the world, times, and history, global security initiatives came into being here and now.