PSG close to concluding: without Lionel Messi or Neymar, Paris can cap a historic tenth crown of champion of France if it does better in Angers than Marseille against Nantes, Wednesday (9:00 p.m.)… 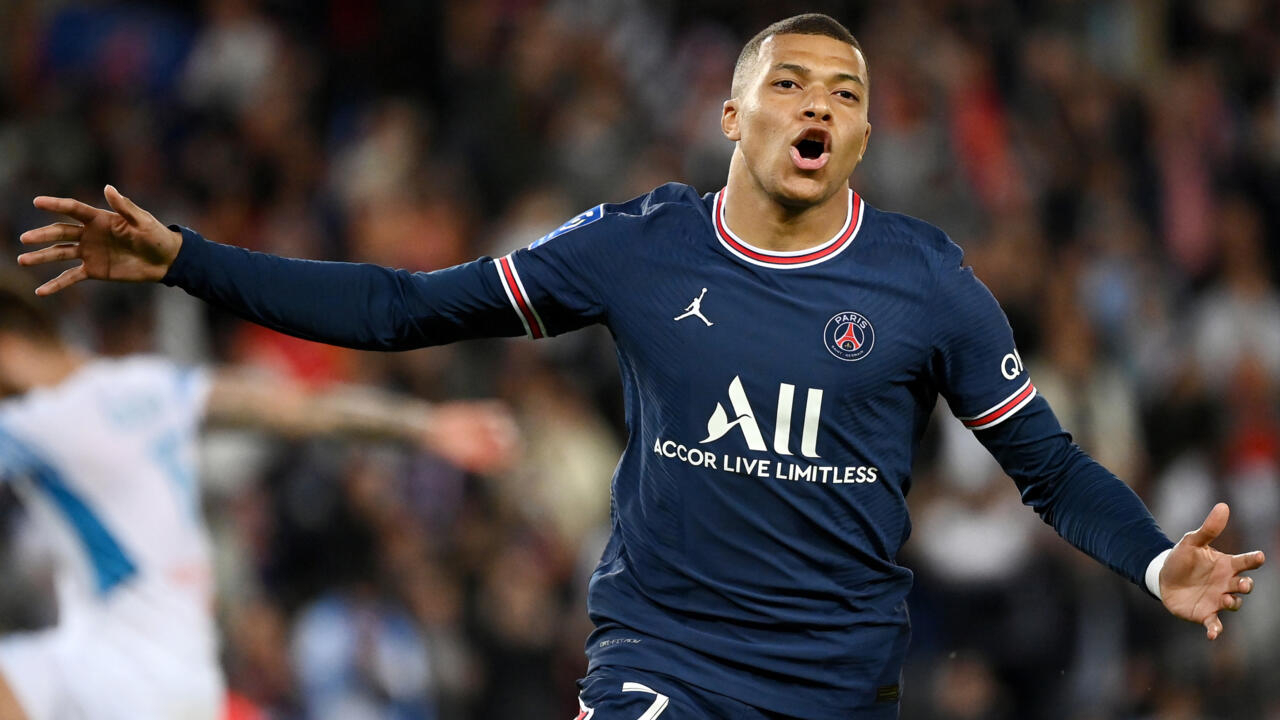 "New bullets": Mauricio Pochettino will have to refresh his squad a bit for this first opportunity to seek a title that seems to no longer be able to escape PSG.

The absences of Messi (Achilles tendon), "Ney" (suspended) or Marco Verratti (knee) sound like "an opportunity for young people to show themselves and gain experience", explains the Argentine coach.

Xavi Simons or Édouard Michut have a chance to play.

Neymar, Marco Verratti and Lionel Messi, warming up before the match of the 27th day of the League between PSG and Nice, March 5, 2022 at the Allianz Riviera Valery HACHE AFP / Archives

The package of Presnel Kimpembe (knee) will rather be compensated by a former, Sergio Ramos, who will be able to enrich his colossal collection of trophies.

With 15 points ahead of their runner-up, OM, the announced coronation is no longer in doubt.

PSG only need 4 points over the remaining six days to win the "Hexagoal" trophy.

Spanish defender Sergio Ramos, under pressure from midfielder Matteo Guendouzi, during the match of the 32nd day of the League between PSG and OM, April 17, 2022 at the Parc des Princes Thomas COEX AFP / Archives

It remains for PSG to finish in style, to make people forget their failures of the season.

Eliminated in the knockout stages of the Champions League by Real Madrid in bitter conditions (1-0, 1-3), released in the Coupe de France by Nice (0-0, 6 pens to 5), even beaten in the Trophy champions by Lille (1-0), the capital club will "only" win the L1 this season.

“I have one year left on my contract”

Angers is not yet assured of its maintenance, with five lengths ahead of the barrage, Clermont, and needs points.

The SCO lost the following 11 confrontations, as well as the final of the Coupe de France 2017 (1-0) on a particularly devious scenario, with an own goal from Issa Cissokho at the last second...

In short, not enough to encourage optimism, faced with a PSG who wants to take care of his exit to be forgiven for a missed European season that his supporters are struggling to digest.

The victory against the great rival Marseille (2-1) on Sunday did not put an end to the strike of encouragement from the CUP (Collectif ultras parisiens).

Argentinian coach Mauricio Pochettino greets his counterpart and compatriot Jorge Sampaoli, during the match of the 32nd day of Ligue 1 between PSG and Marseille, on April 17, 2022 at the Parc des Princes FRANCK FIFE AFP / Archives

"We live in a democracy, repeated Pochettino, we must respect all opinions, I have already commented on it enough. Let's hope that we can celebrate a tenth title all together, and in the future, I hope that there will be a good mutual understanding between all the components of the club."

About the future, Pochettino suggests he wants to stay.

"I have one year left on my contract, so logically it's not a question of will but a contractual question", launches the Argentinian, who has "still intact this desire for revenge" in C1.

But "the season is not over", underlines "Poche", and when the objective of the title "will be fulfilled it will be time to sit down all together to draw the future of the team", completes the technician.

Pochettino is aiming for his first league title on the bench.

He has so far only a Champions Trophy to his name, and a Champions League final lost with Tottenham (2-0 against Liverpool in 2019).

Beyond the title, which would allow PSG to join Saint-Étienne at the top of the list and would give the right to sew the star of ten, circled in blue-white-red, on the chest (PSG has not yet decided if he would), there are still a few lines to write in the history books for the capital club.

The Parisian giant can match Olympique Lyonnais 2006-2007, also crowned on the evening of the 33rd day.

OL finished 17 points ahead of OM.

But PSG can no longer beat their own record for the earliest crowned team in the history of the French Championship, when they were champions from the 30th day in 2016, celebrating the title with a 9-0 against Troyes.

The joy of the players of Paris Saint-Germain, after winning their match of the 30th day of the League, 9-0 against Troyes and winning the title of champion of France, on March 13, 2016 at the Stade de l'Aube JACQUES DEMARTHON AFP /Archives

That year, Zlatan Ibrahimovic's partners finished 31 (!) points ahead of Lyon.

They had scored a whopping 102 goals and only conceded 19, for 30 wins and only two losses.