Blackmail, exploitative parents and a millionaire fraud: what happened to Jordy, the French boy who sang Dur dur d'être bébé!

30 years ago, a French boy, just four years old, achieved a Guinness World Record for becoming "the youngest singer to get a number one". Do not... 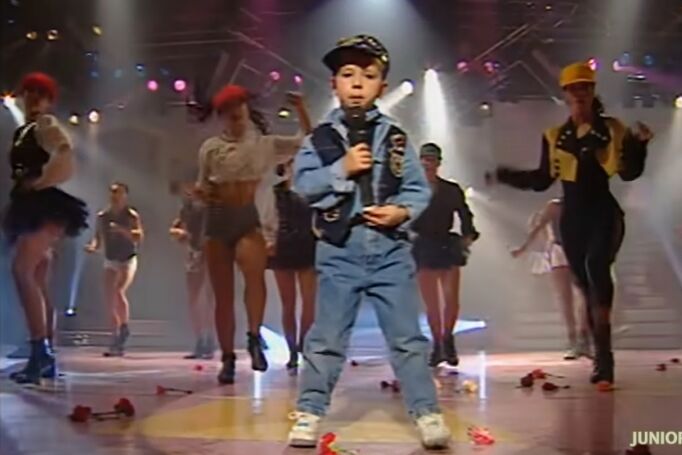 for becoming "the smallest singer to get a number one".

-known simply as Jordy- not only managed to reach the top of the rankings of his country, but of 14 nations (including Spain), in addition to debuting at number 58 on the prestigious

[How hard it is to be a baby!, in Spanish] managed to

sneak into every disco, beach bar

and radio in Europe.

What's more, Jordy came to do

world and appeared a couple of times in Madrid, where he declared that he liked singing more than playing, that his favorite toys were Barbies and that when he grew up he

wanted to be "a doctor, a policeman and a singer".

But, as the years went by, his dreams collapsed.

Jordy Lemoine was born in 1988 in Yvelines.

De he Claude Lemoine - a producer

A gift that could make him attractive to audiences, so he decided to take him to a

At the audition, Jordy had to say the sentence "how hard is it to have a wet diaper!"

and, according to some of Claude's interviews, something about that line sounded extremely musical to him.

In this way, the producer began to

think about the phrase

and, after a few days, he managed to transform it into "how hard it is to be a baby!", which soon became a

However, her little son did not feel like singing it at all.

According to some French media, the former radio presenter Patricia Clerget - Jordy's mother - took weeks to persuade him and

"teach" him to rap

in front of the microphone.

"It comes naturally to Jordy to sing, because he loves to do it."

"Jordy doesn't feel any kind of pressure on him.

For example, it all started because we were in the studio with Claude and he took the microphone. And instead of telling him 'don't play anything', we left him, because we realized that he liked it," said the mother.

But the newspaper found his behavior suspicious and, in pursuit of the truth,

and that his parents

him that, if he didn't sing, they wouldn't take him for a pony ride.

In fact, many journalists during that time asked his parents if they "promoted" their son's career.

But Claude and Patricia always responded the same:

"There is no way to force a child to go on stage,

because they are not like puppets. For him this is a game and we have nothing to do with it."

Despite this, the evidence said otherwise.

had given up their careers to "help Jordy"

and basically lived off their performances.

That is why they took him in less than a year throughout Europe, the United States and part of Japan, Korea and Hong Kong, in addition to making him record three albums.

The first of them -

were nothing more than anecdotal and, according to experts,

did not mean profits for the Lemoines.

And what happened then?

a kind of amusement park

with the image of Jordy.

But, due to the scarcity of hits, the industry's interest in the boy began to wane and the family

As a result, the marriage of the Lemoines went into crisis and they ended up

Claude went one way and Patricia went the other.

to an isolated farm

In this way, according to the Libération

However, his tranquility only lasted until 2005, when he began to be aware of his history, he reviewed his assets and realized that

he did not have the money

that he had once earned.

His father had squandered it all.

In this way, Jordy - then 17 years old - decided to return to the public eye and

make "his true self" known,

without pressure, in a reality show called

In it, the former singer recounted harsh passages from his childhood, that

he did feel exploited

and that his success had not been as happy as it seemed in the 90s, for which the public quickly took pity on him and, after a few weeks , transformed him into the new

winner of the program.

But the former star was not satisfied with his triumph and, a year later,

he wrote a book

to vindicate his story.

I'm not a baby anymore,

he exonerates his mother,

who would have saved him from living on the farm.

"Claude Lemoine is the king of mind manipulation. He

stole from me and lied to me.

It was horrible to get into my account and see a paltry amount of money. There was no trace of record sales, concerts or my image rights." he stated in 2006. During the same time, Jordy attempted to

with a group called Jordy & The Dixies.

But his former record company SONY BMG prevented him from singing his old songs, which provoked deep anger in the young man, who - three years later - decided

to sue the multinational

and his father for damages.

And although it seemed impossible to some, Jordy won close to a million euros.

And what did he do with the money?

He used it to train as

a sound engineer, get married, have two children

and start living as an anonymous, low-key in Britain.