Interpretation: Battle in Donbass! How critical is the "War of the Century" between Russia and Ukraine?

China News Service, April 19 (Reporter Meng Xiangjun) In the middle of the night on the 18th local time, when the war in Mariupol was stalemate, Uzbekistan President Zelensky announced new heavy news. He believes that "after a long preparation", Russia has started a new large-scale offensive against the Donbas region in eastern Ukraine.   The next day, Russian Foreign Minister Sergei Lavrov als 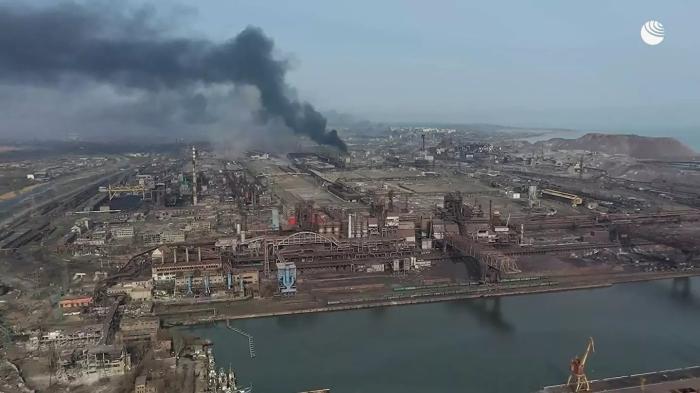 China News Service, April 19 (Reporter Meng Xiangjun) In the middle of the night on the 18th local time, when the war in Mariupol was stalemate, Uzbekistan President Zelensky announced new heavy news.

He believes that "after a long preparation", Russia has started a new large-scale offensive against the Donbas region in eastern Ukraine.

The next day, Russian Foreign Minister Sergei Lavrov also announced that the Russian military's special military operation in Ukraine has entered the next stage.

Previously, Western intelligence agencies assessed that the "Battle of Donbass" would become "the largest ground war in the 21st century" and may even "determine the fate of Ukraine".

Its consequences may exceed expectations...

On April 17, an aerial photo of the Azov steel plant in the conflict between Russia and Ukraine, and a black smoke rose from the local area.

Mariupol, a port city on the Azov Sea, part of the Black Sea, has long been of strategic importance.

It is also home to large steel mills and is a major export hub for Ukrainian steel, coal and corn destined for the Middle East and other regions.

The British Broadcasting Corporation (BBC) used two "major" to describe the special significance of the city: first, the full occupation of Mariupol would be regarded as a major strategic victory for the Russian army; second, the loss of Mariupol, It would be a major new blow to Ukraine's already battered economy.

On the 17th, more than 2,500 Ukrainian defenders in Mariupol rejected Russia's "ultimatum" to lay down their weapons.

The United States assesses that Mariupol is in a "state of contention and isolation" and fierce fighting will continue.

Data map: A fire broke out at a military installation near Mariupol Airport in Ukraine.

On the 19th, the Russian side once again proposed that the Ukrainian defenders stop fighting from 12:00 Moscow time that day and lay down their weapons, and the Russian side will ensure their safety.

Zhang Hong, a researcher at the Institute of Russian, Eastern Europe and Central Asia of the Chinese Academy of Social Sciences, pointed out that whether it is the dispatch of Russian military heavy weapons such as T80 main battle tanks, BTR-82 armored vehicles, Tu-22M3 strategic bombers, "Tulip" mortars, The commander-in-chief of the Russian army was replaced by Dvornikov, the commander of the southern military region. A series of actions indicated that the main target of the Russian army turned to Donbass, and the "Battle of Donbass" had begun.

Zhang Hong analyzed that at this stage, Russia wants to achieve control over the four states of Zaporozhye, Kherson, Luhansk and Donetsk.

Among them, Luhansk and Donetsk are collectively known as the Donbass. The two places respectively have "republics" that declared their independence in 2014, and therefore are the key to the contention between Russia and Ukraine.

On March 20, a schematic diagram of the Russian military operations in Ukraine.

This kind of control has important military significance for Russia.

Zhang Hong said that first, controlling key areas including ports such as Mariupol and Berdyansk means that Russia controls the passage to the Sea of ​​Azov, and the Sea of ​​Azov will become an "inland sea", which is conducive to Russian military layout.

Second, Russia is trying to open up the corridor from Donbass to Crimea.

By taking control of Zaporozhye and Kherson states, Russia can solve the problem of lack of water in Crimea.

Since March 2, the city of Kherson has been completely controlled by the Russian armed forces.

In addition, in the past three days, the Russian army has launched several attacks on facilities such as Kyiv and surrounding military factories.

From April 18 to 19, explosions were reported on the Donetsk front, Kharkiv in the northeast, Nikolayev in the south, and Zaporozhye in the southeast.

Data map: After the exchange of fire between the Ukrainian army and the Russian raid team, the Ukrainian soldiers collected unexploded artillery shells.

According to the BBC analysis, there are various options for the redeployment of Russian troops in the battle of Donbass:

1. Go to northeastern Ukraine and the Donbas area to participate in the battle to encircle and wipe out the regular Ukrainian army;

3. To the northwest, toward the city of Dnipro.

In the second stage, the Russian side will make some tactical adjustments, Zhang Hong said.

The two sides regard Donbass as the main conflict area, indicating that Russia has no intention of overthrowing the Ukrainian regime, but aims to reach a political agreement with Ukraine based on the status of Donbass and Crimea.

[Negotiation prospects: both sides of the coin]

The Ukrainian side also took the initiative to launch an offensive.

Donetsk sources said that the Ukrainian army shelled the town of Donbas on the morning of the 18th local time, firing 66 "hail" rockets and 20 mortar shells.

From the cross-border air strike of the Ukrainian helicopter on the Belgorod oil depot in Russia, to the attack on the Klimovo house, which injured 7 people, on the 19th, it was reported that the Ukrainian side attacked the Russian territory for the third time, causing 1 hurt.

These signs show that Ukraine's actions are "more and more bold".

Zhang Hong said that the Russian side has always wanted to use military means to promote talks, but the United States and the West have continued to provide large-scale assistance to Ukraine. Basically, some of the main battle weapons in the 1980s have entered Ukraine, which has led to the ability of Ukraine to confront Russia and fight a protracted war. and capital gradually increased.

Therefore, Zelensky is not too worried that the blocked negotiation will lead to a major military defeat.

On the other hand, Zhang Hong also said that no matter from the analysis of resource investment, military strength or conflict situation, the Russian army in the Ukrainian battlefield did not have the "failure" as described by public opinion, but continued to retain the advantage of braking power. .

Since the outbreak of the conflict, Ukraine has agreed to negotiate and is willing to achieve neutrality through a referendum. It once said that it would not seek to join NATO. To some extent, it has achieved the key goal of Putin's actions in Ukraine.

Looking back at the draft security treaty proposed by Russia to the United States and NATO in December 2021, the content includes Ukraine's non-joining NATO and neutralization status.

Of course, Russia does not want to fight a protracted war, so it has been calling for an agreement as soon as possible, and has also stepped up its actions against Ukraine in an attempt to force Ukraine to return to the negotiating table.

Now the negotiation has entered a difficult period. Regardless of the outcome, Russia and Ukraine will be able to achieve the negotiation result only after the Donbas Battle is over.

[Acquisition and Cost: A Prediction]

Zhang Hong believes that there may also be an outcome that even if Russia gains control of parts of the Donbass and other areas through the battlefield, the negotiations may still fail to make progress.

Data map: The Donetsk region was shelled by the Ukrainian armed forces and suffered serious damage.

He further predicted that if the control of the four states of Zaporozhye, Kherson, Luhansk and Donetsk is achieved, in terms of Russian cultural traditions, it will be "hard to eat again". Spit it out".

Russia's ultimate goal is to legitimize the de facto occupation of Crimea and Russian-held areas.

Russia may merge the above four states with Crimea to create a new Russian-controlled area bounded by the Line of De facto Control.

If such an area is formed, it may be similar to the situation in Donbas, where conflicts sometimes break out and ceasefires sometimes occur.

White House spokesman Psaki said on the 18th that the United States still does not plan to send troops to Ukraine, and its attention will be focused on "providing historical levels of defense assistance."

The Pentagon said the U.S. would train Ukrainian soldiers to operate U.S.-style weapons such as U.S.-aided howitzers.

The U.S. will still not use force directly with Russia.

The deep logic of the game between the United States and Russia is that the two nuclear powers achieve a "nuclear balance" under the atmosphere of deterrence, Zhang Hong pointed out.

Russia will be caught in the sanctions and isolation of the West for a long time, and the cost of its decoupling from the West will be huge.